Note: the markets and our office are closed on Monday, September 5, in observance of the Labor Day holiday. Our next report will be published on Tuesday, September 6.

Today’s Comment begins with a focus on how hawkish Fed policy has pushed the value of the dollar higher. Next, we review the latest developments in the Russia-Ukraine conflict, which includes our thoughts on a possible price cap on Russian commodities. The report concludes with an examination of China related risk and its potential impact on the global economy.

Strong Dollar: A possible 75 bps rate hike by the Federal Reserve at its next meeting has pushed the dollar to a 20-year high against global currencies.

Russia- Ukraine Update: The war in Ukraine continues to show that the world is starting to form regional blocs. 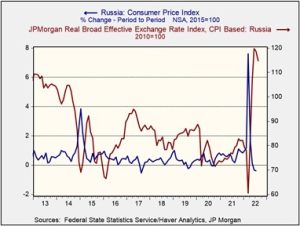 China Risks: New lockdowns and friction with the West will make the China a difficult place to invest.