Our Comment today opens with an update on the Russia-Ukraine war, where the Ukrainians continue to make progress in their key counteroffensives.  We next review a wide range of other international and U.S. developments with the potential to affect the financial markets today, including a preview of this week’s Federal Reserve policy meeting and how it’s affecting the financial markets so far this morning.

Russia-Ukraine:  Ukrainian forces continue to press their counteroffensives both in the country’s northeast near the city of Kharkiv and in the south around the Russian-occupied city of Kherson.  The northeastern attacks have slowed somewhat as the Ukrainians focus on consolidating last week’s gains, although the Ukrainian military says it now controls the key eastern bank of the Oskil River.  The bulk of the Ukrainian effort now appears to be on the Kherson axis.  Meanwhile, Russian forces continue to cede ground and are struggling to establish new defensive lines, at least in part because they are mostly left with poorly trained, poorly motivated volunteers, and other irregular troops.  The Russians are progressively turning to rocket and missile attacks on Ukraine’s civilian energy and other infrastructure in an effort to break the Ukrainians’ will to fight. 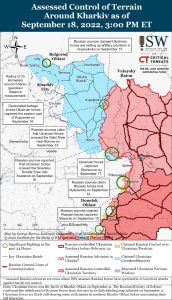 Global Diplomacy:  Queen Elizabeth II’s funeral was held today in Westminster Abbey, with leaders from dozens of major countries in attendance.  With all those leaders rubbing shoulders, it would be no surprise if we see lots of market-impacting diplomatic news from the gathering.  Remarkably, many of those leaders will then head off to New York for this week’s opening of the United Nations General Assembly, so there will actually be several days of major diplomacy to wade through.

European Union:  Today, the European Commission proposed new legislation that would give it the power to force member states to stockpile key products and break contracts during a crisis such as the war in Ukraine or the coronavirus pandemic.

European Union-Hungary:  The European Commission yesterday proposed freezing about €7.5 billion of EU “cohesion funds” earmarked for Hungary over corruption concerns, although it also opened the door for a compromise under which Hungary could get the cash if it addresses its corruption issues.  The move is the latest in the EU’s long-running battle with Hungary, which has chafed at many EU regulations and policies, including the EU’s support for Ukraine in its war with Russia.

Taiwan:  An earthquake measuring 6.8 on the Richter scale struck southeastern Taiwan and reverberated across the island yesterday, causing building damage, derailing a train, and triggering concerns of a tsunami.  As of this writing, however, there have been no reports of damage at the country’s globally-critical semiconductor production facilities.

United States-Taiwan-China:  In an interview yesterday, President Biden again said the U.S. would defend Taiwan “if in fact there was an unprecedented attack” on the island by China.  That marks at least the third time Biden has made the commitment, which suggests he has decided to deliberately shift the U.S. away from its previous “strategic ambiguity” policy toward the island.

U.S. Monetary Policy:  Tomorrow, Fed officials begin their latest two-day policy meeting, with their decision due out on Wednesday afternoon.  Investors are broadly expecting that the officials will again hike their benchmark fed funds interest rate by an aggressive 75 bps.

U.S. Petroleum Industry:  New reports indicate smaller private oil companies that helped boost the country’s oil output over the last couple of years have now begun to deplete their fracking opportunities and are starting to pull back from the market.  With publicly-traded companies still held under a tight leash by investors demanding capital discipline, that raises the prospect of further tightness in supply that could again give a boost to prices, and inflation, going forward.