Our Comment today opens with an update on the Russia-Ukraine war, including an update on how Russia is responding to Ukraine’s recent battlefield gains.  We next review a wide range of other international and U.S. developments with the potential to affect the financial markets today, along with some additional commentary on yesterday’s disappointing inflation data and the resulting big drop in stock prices.

Russia-Ukraine:  As Ukrainian forces continue to consolidate their hold on recently retaken territories in the northern Kharkiv region and around Kherson in the south, the Russian government finally acknowledged its defeat in those areas.  The acknowledgement has focused on failures by the Ministry of Defense and the uniformed military leadership, likely to deflect the blame from President Putin himself.  With the Kremlin’s propaganda machine in disarray, some politicians are calling for a formal declaration of war, a full mobilization, or even a partial mobilization, although we continue to believe a full mobilization would be hard to pull off and remains Putin’s last resort, given how politically risky it would be.  Finally, in new evidence of how Ukraine’s recent successes have impacted Russian resolve and morale, reports indicate that some Russian officials in occupied Crimea are sending their families back to Russia in case the Ukrainians are able to retake the peninsula.

Global Oil Market:  In its monthly crude oil report, the International Energy Agency cut its forecast of global oil demand this year to 99.7 million barrels per day (bpd), largely because of slowing economic growth in the developed countries and continued COVID-19 lockdowns in China.

European Union Energy Crisis:  European Commission President von der Leyen detailed her proposal for a windfall profit tax on electricity producers that don’t rely on natural gas.  With the Russian gas shutoff boosting prices for that fuel, the non-gas producers have been boosting prices in tandem and raking in profits.  Von der Leyen’s proposal would raise €140 billion from an EU-wide levy on those companies and use the funds to soften the blow of record high prices this winter on consumers and businesses.  EU member states will meet to discuss the proposal on September 30.

Armenia-Azerbaijan:  Yesterday, both Armenia and Azerbaijan claimed that the other side had fired on their border communities, sparking a crisis that could potentially reignite their 2020 war.  Moscow has already brokered a ceasefire, but the violence illustrates how Russia’s military failures and political isolation in the Ukraine war have weakened its sway over the countries in its region.

U.S. Inflation and Monetary Policy:  Following up on our initial take on the August consumer price index in our Comment yesterday, we think what was most disconcerting to the market was the unexpected acceleration in the “core” CPI, which excludes the often-volatile food and energy components of the overall CPI.  The August core CPI was up 0.6% from the previous month, which was double its rate of increase in July.  Much of that acceleration reflected faster cost increases for housing, but that wasn’t the whole story.  The acceleration in core inflation reflected faster price hikes in a wide range of non-energy and non-food products. 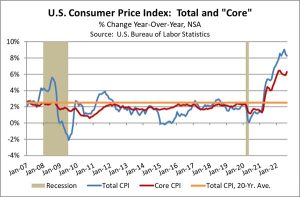 U.S. Railroad Strike:  As the major railroads and their unions remain at an impasse in their contract negotiations, the risk of an economically damaging strike on Friday continues to increase.  The threat has prompted a number of major businesses to appeal to Congress to take action to prevent a shutdown.  The White House has also launched an effort to coordinate alternate transportation providers such as trucking firms and ship companies.