Our Comment today opens with an update on the Russia-Ukraine war, including some notes on Ukraine’s devastating victories over Russian forces since late last week.  We next review a wide range of other international and U.S. developments with the potential to affect the financial markets today, including an important election in Sweden and new research on how COVID-19 continues to hold down the U.S. labor force.

Russia-Ukraine:  Over the weekend, Ukrainian forces continued to rout the Russians in the northern region of Kharkiv and make new territorial gains with their counteroffensive to retake the occupied city of Kherson in the south.  Ukrainian military officials indicate Kyiv has now retaken an area roughly the size of Rhode Island since the beginning of the month.  All reports indicate the Russian retreat is disorganized and desperate.  Nevertheless, the Ukrainians are already slowing their advance this morning in order to consolidate their hold on the recaptured territories and prepare for a possible Russian counterattack.  It is still much too early to expect a full Ukrainian victory or a complete withdrawal by the Russians, but the Ukrainian successes over the last week could mark a turning point that boosts the country’s confidence, encourages further military and other support from the West, and worsens the Russia’s shortfalls in morale, manpower, and equipment.  The Ukrainian military is also likely to benefit greatly from the equipment and ammunition the Russians have abandoned in their retreat, as well as from the intelligence to be gleaned from the Russians’ abandoned command posts. 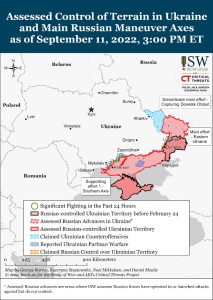 United Kingdom:  Queen Elizabeth II’s funeral has now been set for Monday, September 19, in Westminster Abbey.  Importantly, all indications are that leaders from across the world will descend on London for the event, making it a major unscheduled diplomatic meeting.  Confirmed attendees so far include U.S. President Biden, European Commission President von der Leyen, Japanese Emperor Naruhito, and New Zealand Prime Minister Ardern.  We would not be surprised if the funeral ends up spawning several important meetings and initiatives.

United Kingdom-European Union:  To take advantage of the U.K. leadership change last week, Chief EU Brexit Negotiator Maroš Šefčovič has offered an idea to resolve the EU-U.K. dispute over customs checks for goods going from the British mainland to Northern Ireland.  Under his proposal, the U.K. would share data on the shipments with the EU in real time, and physical checks would only be required in rare instances in which there was a suspicion of smuggling or other issues.

Sweden:  In parliamentary elections yesterday, preliminary results showed a center-right bloc of parties with a slim majority over a center-left bloc, but the real news was that the right-wing nationalist Sweden Democrats took their biggest-ever share of votes in a general ballot. Final results are not due for several days, but it appears that the Sweden Democrats will be the largest party in the right-wing bloc and the second-largest party overall.  If the right wing takes power, one important implication is that they are likely to push more reliance on nuclear electricity generation in Sweden, further bolstering a global trend.

Colombia:  In an interview with the Financial Times, Environment Minister Susana Muhamad said the government of leftist President Gustavo Petro will, for the first time, require environmental licenses for mining exploration as part of a wider overhaul of the process for awarding concessions.  The move likely signals the kinds of new regulations that will be put in place as left-wing leaders take control of more governments in Latin America.

U.S. Dollar:  Ahead of tomorrow’s release of the August Consumer Price Index (CPI), the dollar is weakening substantially against all major currencies except the yen.  The softening in the greenback partly reflects expectations that CPI inflation will slow, potentially setting the stage for the Federal Reserve to slow its interest-rate hikes down the road.  In addition, investors may still be digesting the European Central Bank’s aggressive 75 bps hike in its benchmark interest rate last week.

U.S. Labor Market:  New research by economists at Stanford University indicates that illnesses caused by COVID-19 have reduced the U.S. labor force by about 500,000 from what it would otherwise be.  Retirements and other social impacts from the pandemic probably account for a greater share of today’s workforce shortfall, but the research still illustrates the ongoing cost of not reducing infections further.  The shortfall in the labor force from what it would be otherwise has likely contributed to labor shortages, spiking wage rates, and higher inflation.