Good morning!  U.S. equity futures are under pressure again this morning as equity markets grapple with the ongoing pandemic, the uncertainty around the budget process, and the potential for a debt ceiling standoff.  The ECB and the Fed kick off our coverage.  Today’s ECB meeting showed no rate changes, but there is a modest slowing of asset purchases.  The Fed Beige Book was released; we comment on the report and other Fed issues.  Remarks on distributed finance follow. Our regular coverage begins with China news, as investors and analysts try to determine how much policy will change.  Economics and policy follow, with a look at the budget talks and the debt limit.  The international roundup is next, and we close with pandemic coverage.

ECB:  For the most part, the ECB stays accommodative.  There were no changes in policy rates, as expected, but there will be a slowing of the Pandemic Emergency Purchase Program (PEPP) bond-buying.  It may not be an actual taper.  We could see the reduced buying in PEPP shifted to the overall buying program.  This change was mostly signaled, so market action has been modest.  By the way, the ECB also describes the rise in inflation as “transitory,” keeping in line with the Fed.  In the press conference, the tone was generally more dovish than the statement, leading to a weakening EUR and stronger European equities.

Beige Book:  The keyword is “moderation” in the Beige Book.  This report, which is compiled by the regional FRBs, gives an insight into regional conditions.  In most districts, the common theme was that growth has slowed but remains positive; the weakness is driven by the ongoing pandemic and supply-side shortages, including both materials and labor.  These shortages are leading to inflation concerns. 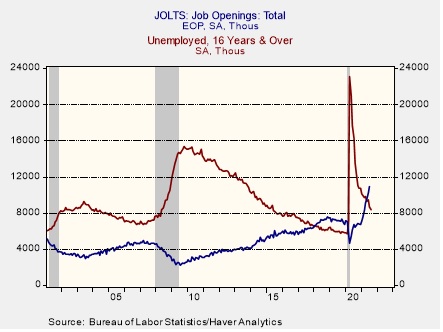 This chart shows the job openings from yesterday’s JOLTS report regarding the level of the unemployed.  In the 2001-07 expansion, this level was never achieved.  In the 2009-20 cycle, this level wasn’t achieved until February 2018.  We crossed the lines in May, showing a rapid recovery.[1]

Crypto:  The SEC is investigating Coinbase Global (COIN, USD, 258.20) over its lending program using crypto assets as collateral.  This prompted the CEO of the company to criticize regulators in a series of tweets.  The SEC is arguing that this proposed lending activity is potentially violating securities laws.  The government is also investigating Uniswap.  Much of what these firms are doing in decentralized finance is consistent with lending and trading in the regulated world, but these crypto firms want to do it in an unregulated environment (who wouldn’t?).  History shows that, eventually, leverage leads to bad debt and the potential of a crisis.  The fact that the firm was advertising 4% deposit rates is a clear warning.  The SEC and others are trying to prevent this.  We note that over the weekend, the NYT reported on the “boom” in crypto lending that has caught the attention of regulators.

China:  China’s financial markets remain a concern, and the confusion surrounding what exactly Xi means by common prosperity is beginning to look like a mess. 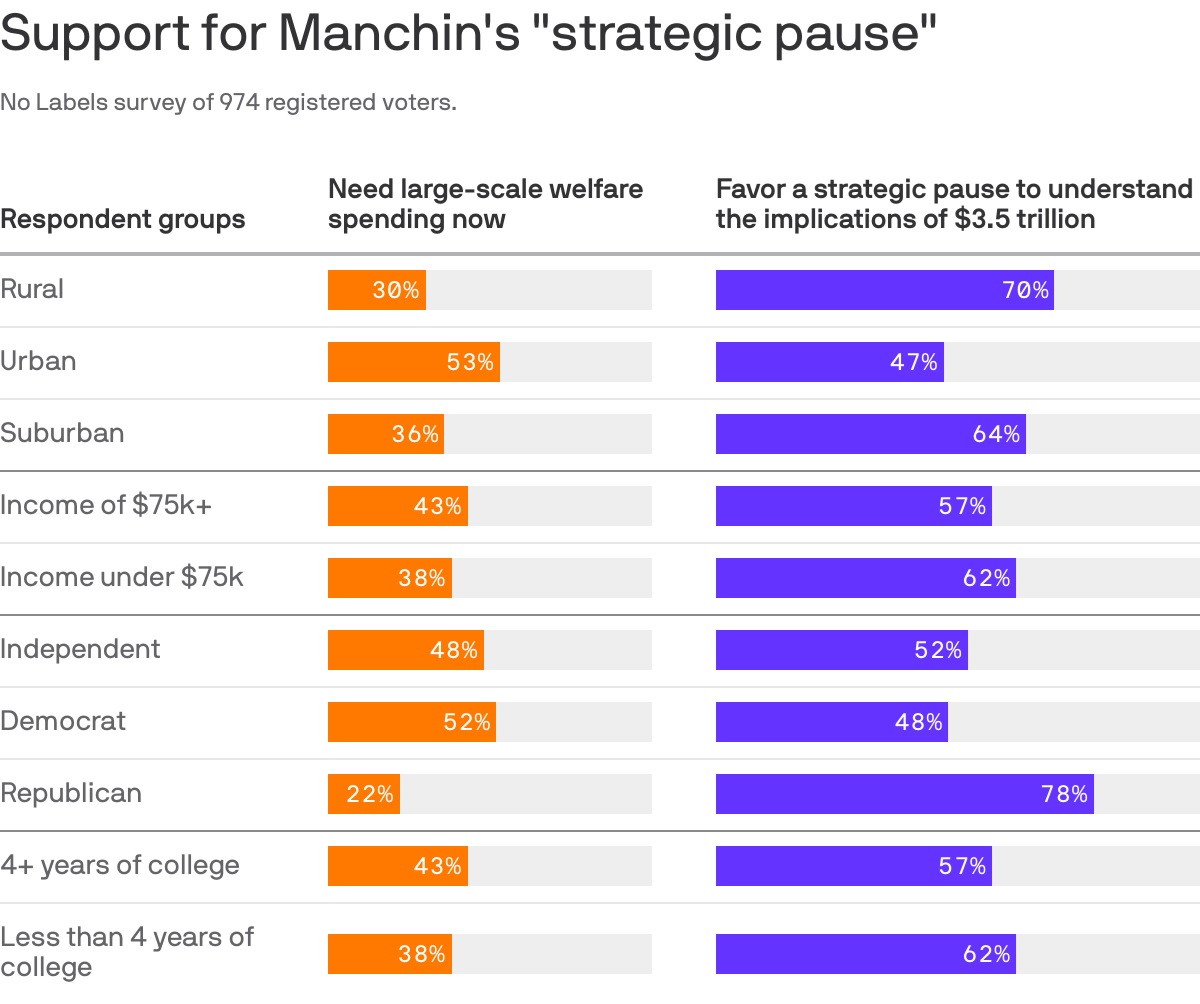 COVID-19:  The number of reported cases is 222,650,255, with 4,598,278 fatalities.  In the U.S., there are 40,266,505 confirmed cases with 652,930 deaths.  For illustration purposes, the FT has created an interactive chart that allows one to compare cases across nations using similar scaling metrics.  The FT has also issued an economic tracker that looks across countries with high-frequency data on various factors.  The CDC reports that 450,584,465 doses of the vaccine have been distributed, with 376,955,132 doses injected.  The number receiving at least one dose is 208,024,209, while the number receiving second doses, which would grant the highest level of immunity, is 177,104,652.  For the population older than 18, 64.4% of the population has been vaccinated.  The FT has a page on global vaccine distribution.  For the most part, cases are stabilizing, although a few central U.S. states are showing a noticeable rise.

[1] One interesting sidelight is that companies have become increasingly reliant on algorithms to screen job applicants.  Large companies often receive thousands of applications, and using human resource professionals to review and screen would be cost-prohibitive.  However, these algorithms are mostly designed to eliminate, not find, candidates.  It might be the case where these screening tools may be eliminating candidates who could meet the job requirements.  It may be a function of the programs being written in a time of looser labor markets.  Simply put, firms may have lots of openings but lack the ability to find workers.  A recent Harvard Business Review article examines this problem.

[2] In tomorrow’s Weekly Energy Update we will comment on the energy industry’s opposition to methane taxes.