Good morning and happy Monday, the last one for September 2021 (time flies!).  U.S. equity futures are mostly flat this morning, while crude oil is near a three-year high.  Our coverage leads off with the German elections, which were something of a draw.  The Meng Wanzhou saga is up next, followed by an Evergrande (EGRNF, USD, 0.32) update and crypto news.  The British supply crisis is next in line.  We then take a look at the current state of the budget, the infrastructure bill, and the debt ceiling.  We close our special coverage with an update on the SEC’s action regarding corporate bonds.  Our regular coverage includes China news, international news, economics and policy, and our pandemic coverage.

BREAKING:  Boston FRB President Rosengren announced his retirement.  He, along with Dallas FRB President Kaplan, were aggressively trading their own accounts during the 2020 financial crisis and have come under harsh criticism for the appearance of trading on privileged information.  His term didn’t end until 2026.  We will be watching for news from Dallas.  It should be noted that he has renal failure and is awaiting a kidney transplant, so his retirement may not be tied to the trading situation.  If Kaplan resigns as well, Powell will have removed a source of complaint against the Fed and may preserve regional bank control of the president selection.

German Elections:  The SDP won a plurality, ending 16 years of CDU/CSU dominance, but the vote was close.  The SDP won 25.7% of the vote compared to 24.1 for the CDU/CSU.  The Greens took 14.8% of the vote, while the FDP won 11.5%.  Die Linke won 4.9%.  All other parties fell below the 5% threshold, meaning they won’t get seats in the Bundestag.  Although both the SDP and CDU/CSU have claimed they won the right to form a government, the Greens and the FDP will most likely be the basis of the new government.  These two parties are already in coalition talks, and once they fix their agenda (like who gets what ministries), they will engage the two larger parties.  However, talks between the Greens and the FDP won’t be easy.  The Greens stand for environmental policies and are pro-EU.  The FDP leans libertarian and opposes higher taxes and the Eurobond.   Christian Linder, the FDP’s leader, will probably demand the finance ministry.  If the Greens and FDP fail to build a bloc, the next government could take months to form.  At this point, the German government is something of a “jump ball.”  We expect the FDP and the Greens to try hard to form an alliance, considering the power it will give them; what happens after is anyone’s guess. 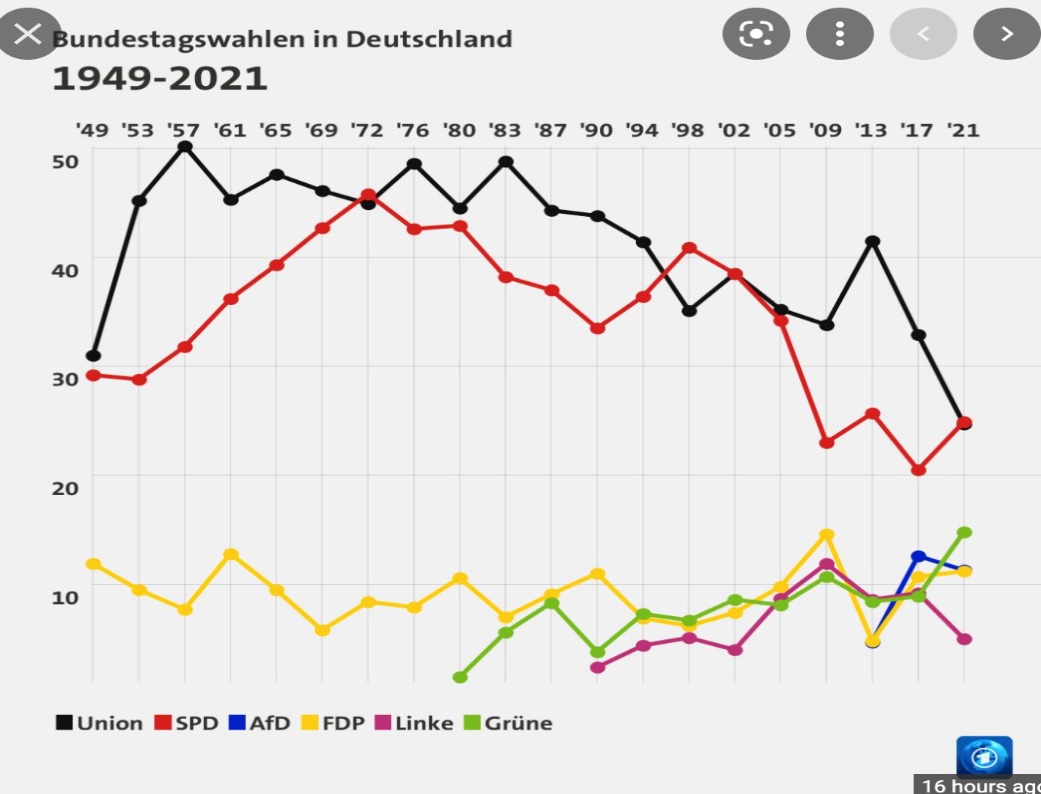 Although the exit of Merkel creates a power vacuum of sorts, we don’t see any other EU power that will be able to replace Germany.

Meng goes home:  Huawei (002502, CNY, 6.64) CFO Meng Wanzhou was detained in Canada in 2019 on charges she and her company sold telecom equipment to Iran in violation of U.S. sanctions.  She was held under house arrest until this weekend when she flew home to China.  Under terms of the plea deal, she admitted to assisting her company’s attempt to conceal the sales to Iran.  The other element of this affair was that Beijing arrested two Canadians and held them in conditions far harsher than Meng’s palatial estate in British Colombia.  Meng’s plea deal was also a prisoner swap; China freed the two detained Canadians.  It appears the arrest of the Canadians was with the intent to swap for Meng.  We suspect this sort of thing will become more common in China and should be taken as a warning to ex-pats living there.

Evergrande:  The slow-motion collapse of Evergrande continued over the weekend.  Last week, the company failed to make debt payments, and it is now in the 30-day grace period before there is an official default.  Cities are starting to take the lead in managing the breakup of the company.  City governments have reportedly seized presales to prevent the company from using the funds which should be escrowed.  Although this move makes sense, it will deprive the company of funds.  The electric vehicle unit is warning that it is running out of cash.  Meanwhile, Beijing continues to manage the default by a strong security presence and control of social media.

Although there have been obvious analogs to LTCM and Lehman, a better analog may be Japan in the early 1990s.  When Japanese regulators allowed banks to fail, it ended the expectation that default wasn’t possible.  China fears repeating Japan’s experience of the 1990s with good reason; excessive debt led to years to near-zero economic growth.

Cryptocurrencies:  On Friday, China announced a complete ban on the use of cryptocurrencies.  We suspect there are two reasons behind the ban.  First, China is speedily moving to issue its own CBDC and likely doesn’t want alternative crypto as competition.  Second, and likely the reason Beijing acted now, bitcoin and other cryptocurrencies can facilitate capital flight.  The Evergrande situation will almost certainly lead to arrests, perhaps of corrupt officials, and Beijing likely wants to prevent anyone under threat from moving their assets out of China so those assets can be seized.  The next step will probably be attempting to corral offshore exchanges.

In the U.S., stablecoins are the focus of regulators.  The fear is that these funds are runnable, and given that crypto has infiltrated into other financial assets, a crisis emanating from stablecoins could spread.  The Treasury and SEC are moving rapidly to regulate this space, but so far, we haven’t seen a move to follow China.

And finally, a couple of other notes—bitcoin, which uses lots of electricity in its clearing process, has come under criticism from environmentalists.  There are reports that miners are teaming up with nuclear power operators with excess capacity.  There are emerging market economies with primitive financial systems that are adopting bitcoin as a national currency.  In some respects, this is not unlike a foreign nation setting up a currency board and using a foreign currency as the basis of its monetary system.  The drawback with using bitcoin is that it is naturally deflationary and may make managing the economy a challenge.

U.K. supply crisis:  A combination of Brexit restrictions on trade and the movement of labor, coupled with supply chain disruptions triggered by the pandemic, have left the U.K. looking like the 1970s, with lines at gasoline stations and empty supermarket shelves.  The transportation minister, Grant Shapps, has exacerbated the obvious political fallout from this evolving crisis, blaming trucking firms for creating the situation.  However, the real problem is a lack of truck drivers who returned to Europe after Brexit and have not been replaced by locals.  PM Johnson will issue short-term visas to try to attract those drivers back.  Albeit, after leaving, that might not be enough.  As gas lines form, Johnson is also planning to use the military to haul fuel to gas stations.  Panic buying (something we saw in the U.S. in the 1970s and recently during the Colonial Pipeline crisis) is exacerbating the problem.  Although Johnson remains secure, these types of events can consume political capital, undermining the government’s ability to do other policies.

Budget, infrastructure, and the debt ceiling—oh my!  First, the infrastructure bill is expected to come to the House floor by Thursday before the budget bill.  This action crosses a red line for progressives, who said they won’t vote for it before the budget, fearing that if the infrastructure bill passes, moderates will pare back the budget.  This is a legitimate concern, but it may not matter.  As all this drama occurs, the Treasury is facing a debt ceiling crisis and is considering several emergency measures, including a government shutdown and various actions to swap debt.  So far, financial markets are taking the news rather well.  Perhaps they view the situation as one described by the 1980s group Adam Ant.  In the end, the Democrats will likely have to put the debt ceiling in the reconciliation process and give the GOP election talking points.  Although we expect this “crisis” will be over by Halloween, with the infrastructure bill passed, a much smaller budget ($2.0 trillion), and a new debt ceiling, the uncertainty could trigger some market volatility.

About bonds:  Last week, we reported the SEC was considering changing the disclosure rules for corporate debt, which may have led brokers to stop placing bids/offers.  Mercifully, the SEC has postponed the action and may end it altogether.

China news:  The IMF head is in trouble.

COVID-19:  The number of reported cases is 231,913,317, with 4,749,880 fatalities.  In the U.S., there are 42,932,211 confirmed cases with 688,041 deaths.  For illustration purposes, the FT has created an interactive chart that allows one to compare cases across nations using similar scaling metrics.  The FT has also issued an economic tracker that looks across countries with high-frequency data on various factors.  The CDC reports that 471,814,235 doses of the vaccine have been distributed with 390,114,328 doses injected.  The number receiving at least one dose is 213,456,787, while the number receiving second doses, which would grant the highest level of immunity, is 183,670,870.  For the population older than 18, 66.6% have been vaccinated.  The FT has a page on global vaccine distribution.