Good morning!  U.S. equity futures are higher this morning as the market digests the continuing Evergrande (EGRNF, USD, 0.40) issue and the Fed meeting.  Our coverage begins with the FOMC meeting.  Evergrande is up next, followed by China news.  We then discuss technology and cryptocurrency news along with economics and policy.  We conclude with the international roundup and a pandemic update.

The FOMC meeting:  As expected, the Fed didn’t change policy rates.  But the bank is clearly signaling that the balance sheet will be reduced soon.  In examining the statement, the FOMC has acknowledged that the economy is improving but noted that the pandemic continues to act as a drag on growth.  The committee also admitted that inflation is elevated but continues to hold the opinion that it is transitory.  The biggest change indicates that “If progress continues broadly as expected…a moderation in the pace of asset purchases may soon be warranted.”  There were no dissents. 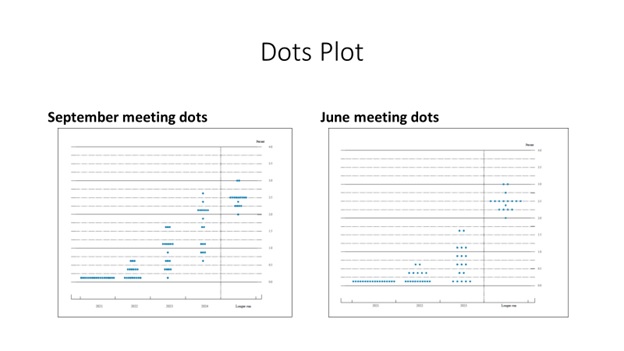 The dots plot has become more hawkish.  In June, seven members wanted to raise rates next year, now nine do.  So, the 18-member committee is now split on rate hikes in 2022.  For 2023, five members expected a steady fed funds rate through that year.  Now, only one lonely member expects the policy rate to remain steady.[1]

The financial market’s initial reaction seemed to lean dovish; equities rose, Treasury yields declined, and the dollar fell.  This appeared to be quite odd given that the report seemed to be rather hawkish, but perhaps the market thought it would be worse.  So far, Chair Powell is managing expectations rather well, but inflation will likely be a greater challenge in the coming months, so will the growth sentiment toward rate hikes in 2022.

On a related note, calls for Dallas FRB President Kaplan and Boston FRB President Rosengren to resign are rising due to their trading activity.  This situation bears watching.  There has been a call for requiring Senate approval for FRB presidents, and this event might just lead to that outcome.

Evergrande:  It’s now a foregone conclusion that Evergrande is going to default and will need to restructure.  In any restructuring, creditors are ranked by their claims and then fight over what remains.  In a normal restructuring, bondholders are usually the highest ranked, with equity holders last.  That isn’t likely how this one will go.  One way that Evergrande financed itself was through pre-sales.  Future homeowners would put up a portion of the value of the property and wait, sometimes for years, to take possession.  Since much of what Evergrande sold was considered a form of saving, waiting wasn’t seen as an issue.  For social reasons, these creditors will be first in line, even though in the West, they would be considered unsecured and farther down the line of claimants.  We are not sure who would come next; it might be local governments.  We feel rather confident that foreign bondholders will be last in line.

Although the immediate issues surrounding the collapse of Evergrande are front and center, there are longer-term ramifications that are also important.  One of the more insightful observers of China is Michael Pettis.  His recent missive points out that addressing China’s debt problem most likely means that economic growth is going to be weaker going forward…perhaps much weaker.  The growth of China’s debt has been a problem for a while.  China’s trend growth is probably 2% to 3%, so any growth above that required investment funded by debt.  If that avenue for excess growth is lost, the world will have to cope with much weaker Chinese growth.  Since the CPC has made its name by facilitating growth, some other reason for its existence has to emerge.  We suspect the growing “cult of Xi” is the substitute.  We will see how it works.

The ripple effects of the Chinese debt crisis will be closely watched and could trigger some unexpected downside surprises.  Some of this is because of tighter regulations.  Another problem will be that debt crises have a habit of unveiling previously hidden problems or triggering new ones.  To address the debt problem, for example, overindebted firms will start liquidating assets to raise liquidity.  As they dump assets, their prices fall, triggering fears of further declines and causing prices to fall in other parts of the economy.  For example, iron ore prices have plunged on fears of falling Chinese property development.  We note the PBOC has been aggressively injecting liquidity.  Another problem that often develops is that the groups protected in the bailout become a source of moral hazard emboldened to take on more risks due to the perception of safety.

Although we can’t rule out a Lehman-style debt crisis, the odds of that outcome are probably not elevated.  The bigger issue is that the world will have to adapt to a China with much slower growth, and the impact on the global economy will be significant.

Cryptocurrencies:  Increasingly, regulators are moving to regulate the crypto market.  Of particular concern are stablecoins, which may be prone to bank runs.  There are increasing signs that regulators are going to move against stablecoins, which, if true, will weaken the ability of that market to function.  When holders of bitcoin or other cryptocurrencies want to “cash out,” they often purchase stablecoins, avoiding the traditional financial system.  The SEC’s Gensler is taking a particularly dim view of crypto, suggesting it is similar to the private wildcat banking of the 1800s.  Another area of concern is the use of crypto for ransomware payments; the U.S. is building regulations against such payments.

Economics and policy:  Talks on the budget and debt ceiling continue, and the administration nominates a professor for the position of Comptroller of the Currency.

International roundup:  Washington and Paris are trying to make up.

COVID-19:  The number of reported cases is 230,189,529, with 4,721,127 fatalities.  In the U.S., there are 4,182,893 confirmed cases with 681,222 deaths.  For illustration purposes, the FT has created an interactive chart that allows one to compare cases across nations using similar scaling metrics.  The FT has also issued an economic tracker that looks across countries with high-frequency data on various factors.  The CDC reports that 468,248,675 doses of the vaccine have been distributed with 387,493,716 doses injected.  The number receiving at least one dose is 212,545,360, while the number receiving second doses, which would grant the highest level of immunity, is 182,387,840.  For the population older than 18, 66.1% have been vaccinated.  The FT has a page on global vaccine distribution.  The Axios map shows that the South is seeing a decline in cases.  As temperatures cool in the North, cases are rising.

[1] Our guess?  Neil Kashkari, the Minneapolis FRB president, is likely the “lonesome dove.”