In today’s Comment, we open with a discussion of new global inflation forecasts from the OECD and include some notes on monetary policy and inflation.  We next turn to a range of U.S. and international developments that could impact the financial markets today.  We close with the latest news on the coronavirus pandemic.

Global Inflation:  In updated forecasts that will likely bolster concerns about consumer price growth, the OECD said it now expects inflation to be significantly higher in 2021 and 2022 than it had previously forecast for most G20 countries. 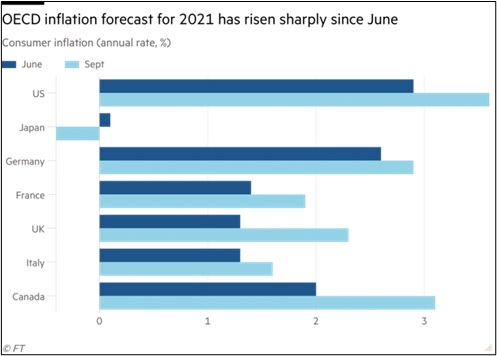 European Energy Market:  As natural gas prices continue to surge in response to rising demand and crimped supply, the British government is reportedly considering state-backed loans to large utilities that take on customers from smaller energy companies that have collapsed.  It may subsidize fertilizer production after rising gas prices forced two of the country’s major fertilizer plants to suspend production.  On the Continent, several EU governments are being forced to discuss billions of euros in aid for households and stricken suppliers.

United States-European Union:  The rift between the U.S. and Continental Europe continues to widen following the chaotic U.S. withdrawal from Afghanistan and the signing of the AUKUS submarine deal in abrogation of a French-Australian agreement.  It now appears that France tried to push Brussels to postpone the high-level U.S.-EU trade and technology council meeting due to take place in Pittsburgh later this month.  That’s on top of France recalling its ambassadors to the U.S. and Australia and the EU calling off free-trade negotiations with Australia.  In the words of Thierry Breton, EU commissioner for internal markets, “There is of course in Europe a growing feeling that something is broken in our transatlantic relations.”

U.S. Monetary Policy:  The Federal Reserve begins its latest two-day policy meeting today, with a decision on interest rates and asset purchases due tomorrow.  Many observers expect the policymakers to signal they will begin to taper the Fed’s bond purchases in the next few months.  However, Chair Powell has stressed that the move would not necessarily point to any hike in the benchmark fed funds interest rate in the near term.  The problem is that the committee will also release its latest “dot plot” of economic forecasts tomorrow.  If the dot plots indicate rates will be hiked earlier than anticipated, it would likely spark a renewed bout of volatility in the financial markets.

Canada:  Prime Minister Trudeau and his Liberal Party won yesterday’s elections, giving Trudeau a new mandate as leader of the country, but he fell short of his goal of securing an outright majority in parliament.  The Canadian Broadcasting Corporation projects the Liberals will win 156 seats, just one more than the 155 it had since the last election in 2019 and well short of the 170 needed for an outright majority.

China Evergrande:  Even as risk markets today are recovering a bit from their plunge yesterday, which was driven in part by concerns that major Chinese developer Evergrande might default on its debts, the company still isn’t out of the woods.  Reporting today indicates Evergrande used billions of dollars raised by selling wealth management products to retail investors to plug funding gaps and even pay back other wealth management investors.

Russia:  Preliminary results show the Kremlin-backed United Russia party maintained its constitutional majority in the lower house of parliament in elections last weekend.  United Russia candidates took 112 seats in the State Duma along with 198 single-mandate constituencies across the country.  That gives the party a comfortable two-thirds majority in the Duma’s 450 seats needed to make changes to the constitution.  The election was denounced by the West and described by an independent monitoring agency as “one of the dirtiest” in Russian history.

Digital Currencies:  Coinbase (COIN, 236.53) has dropped its plans to launch a new digital asset lending product, bowing to pressure from U.S. securities regulators, who had warned that it constituted an unregistered security that would have prompted them to take legal action.