Good morning on a rather blue (or, better said, red) Monday.  U.S. equity futures are down hard this morning as stocks appear to be in a corrective phase.  There is a lot of news this morning.  There was a volcanic eruption on the Canary Islands.  Ash from these eruptions can lead to cooler temperatures.  China’s markets were closed for the autumn holidays.  Canadians go to the polls today.  PM Trudeau called snap elections in a bid to build a majority government, but polling suggests the plan failed.  They voted in Russia yesterday, and despite severe restrictions and allegations of voting irregularities, Putin-aligned parties didn’t do very well.  There is no danger he will be pushed from office, but Putin uses these votes as proof of legitimacy, so his weak showing won’t sit well.  In a bit of a departure from our usual lineup, we will start today with a look at issues that are weighing on equities.  Next will be economics and policy, followed by international issues, and we will close with the pandemic update. 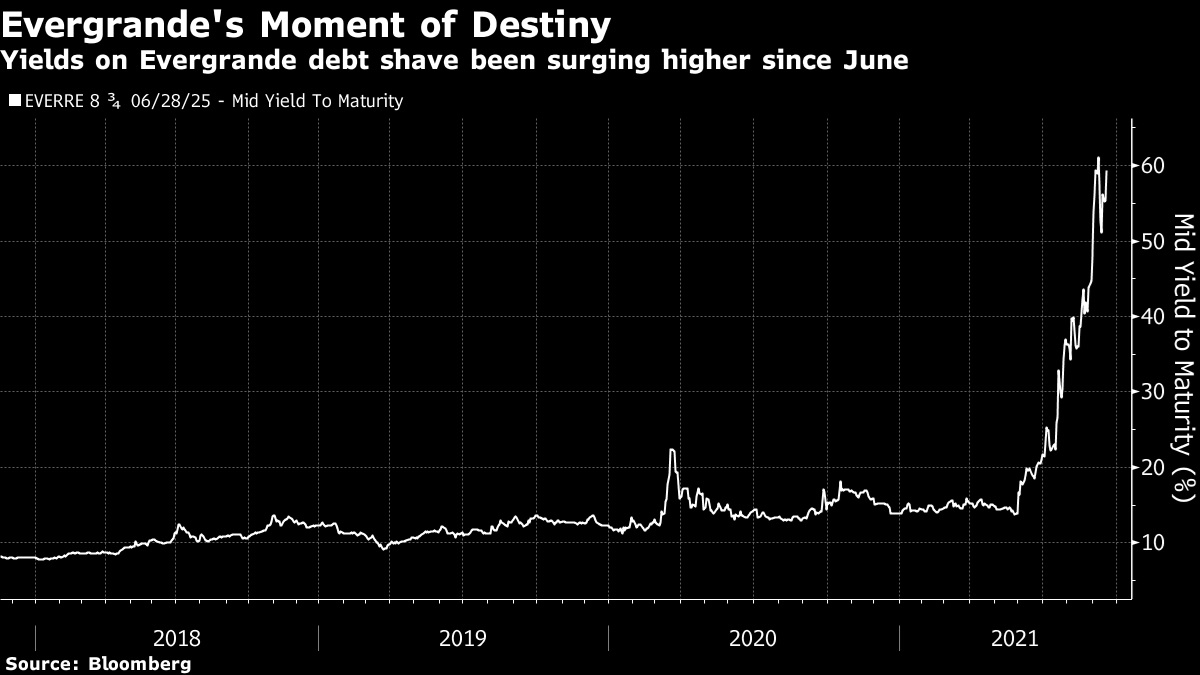 It has interest payments due today and later this week and has already indicated it won’t make them.  As we have noted over the past couple of weeks, there are broadening ripple effects from the decline of Evergrande.  Contractors and workers are losing out and social unrest is rising.  Many employees were encouraged to buy Evergrande wealth management products, which can best be described as having preferred stock characteristics.  It now comes to light that executives cashed out early while they still had value.  The company’s biggest boosters are bailing out, usually a signal the end is near.

The company is too big to fail.  It has 200,000 direct employees but creates 3.8 million jobs per year.  It has diversified beyond real estate, including EV’s and a theme park.  It currently owns 1,300 projects in 280 cities across China.  Evergrande is a classic “grey rhino.”  Unlike a “black swan,” which is an unpredictable event, the company and the real estate industry have had a problem for a long time.

So, what’s the difference between a Lehman event and an LTCM event?  The former creates a hard to control systemic event, while the latter is isolated and controlled.  The LTCM event was resolved by the Fed and the Treasury, forcing large banks to buy up LTCM’s positions and prevent the financial markets from locking up.  Both events are related; regulators were upset over the moral hazard caused by the LTCM bailout, and thus, allowed Lehman to fail and set an example.  We don’t think Beijing wants a Lehman event, and it has the power to prevent it.  However, by doing so, it creates a moral hazard.  It will be hard to argue that real estate speculators will be less open to continue speculating in the aftermath.  We expect some differences.  Evergrande executives will probably be arrested to act as a deterrent to others.  We doubt it will work.  If we are correct, the good news is that Evergrande won’t bring down the financial system, so market conditions from this event will improve in the next few weeks; the bad news is the rot caused by real estate malinvestment won’t be fixed either.  Investment-grade corporate bonds are not showing signs of stress, which suggests the Evergrande problem, so far, is contained.

Overall, we think equity markets are simply going through a correction.  What would change our minds?  If Evergrande is really a Lehman event or if monetary policy rapidly reverses.  Although both are possible, we don’t see them as likely.  Soon we will be in Q4, which is a seasonally positive period for equities.  A pullback in front of that period would set the market up for a year-end rally.

Economics and policy:  Overtime and revolving doors are an issue.

International roundup:  The French are angry.

COVID-19:  The number of reported cases is 228,630,066, with 4,693,750 fatalities.  In the U.S., there are 4,291,156 confirmed cases with 673,768 deaths.  For illustration purposes, the FT has created an interactive chart that allows one to compare cases across nations using similar scaling metrics.  The FT has also issued an economic tracker that looks across countries with high-frequency data on various factors.  The CDC reports that 466,561,785 doses of the vaccine have been distributed with 385,586,785 doses injected.  The number receiving at least one dose is 211,776,515, while the number receiving second doses, which would grant the highest level of immunity, is 181,382,976.  For the population older than 18, 65.8% have been vaccinated.  The FT has a page on global vaccine distribution.

The FDA has voted against Pfizer’s (PFE, USD, 43.89) booster shot plan, limiting boosters to at-risk patients.  Meanwhile, physicians are making vaccination decisions on who can get boosters.