Good morning.  It looks like an “everything down day” so far, although the retail sales data (see below) offered some relief.  U.S. equity futures currently are mixed after opening lower.  Treasury prices are down a bit, and commodities are weaker as well.  The dollar is higher, which is likely behind the weakness.  Our coverage starts with China news.  Australia will join the U.S. and the U.K. in sharing nuclear submarine technology, and Beijing is going after gaming.  Up next is economics and policy; the budget and debt ceiling turmoil continues.  The international roundup follows.  The EU discussed its state of the union, and PM Johnson shuffled his cabinet. We close with pandemic news. 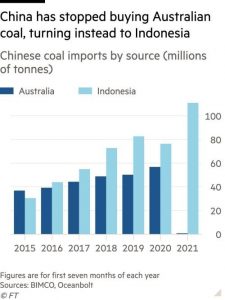 Australia was once a major supplier of coal to China but has been losing share to Indonesia.  Obviously, this year, the changes are stark.

Economics and policy:  Budget and debt ceiling matters continue, and the Treasury is looking at stablecoins.

International roundup:  The EU held its State of the Union address, and PM Johnson changes his cabinet.

COVID-19:  The number of reported cases is 226,453,332, with 4,661,290 fatalities.  In the U.S., there are 4,323,121 confirmed cases with 666,627 deaths.  For illustration purposes, the FT has created an interactive chart that allows one to compare cases across nations using similar scaling metrics.  The FT has also issued an economic tracker that looks across countries with high-frequency data on various factors.  The CDC reports that 461,117,525 doses of the vaccine have been distributed, with 382,294,795 doses injected.  The number receiving at least one dose is 210,361,099, while the number receiving second doses, which would grant the highest level of immunity, is 179,695,287.  For the population older than 18, 65.2% have been vaccinated.  The FT has a page on global vaccine distribution.  The Axios COVID-19 map shows some improvement, although as the weather cools, we are seeing an uptick in cases in the northern part of the nation.

[1] IOHO, one of the top 5 financial podcasts out there, only topped by the Confluence of Ideas and the Asset Allocation Weekly Podcast.