Good morning and happy Monday!  A lot is going on in the world today as we turn toward autumn.  After a soft week, equities are lifting this morning.  We begin with comments on what is shaping up to be a turbulent month.  There is an abundance of election news around the world, and we take a look at several races.  Crypto news comes next, followed by our coverage of China.  Next up is economic and policy news and our international roundup.  We conclude with a pandemic update.

We used to like September:  School resumes, the NFL returns, the baseball season winds down with at least a couple of races for the playoffs.  Summer weather gradually cools, and temperatures become less oppressive.  The hint of autumn comes with the equinox (September 22 for those keeping score).  However, this September could be volatile.  The nuts and bolts of the budget are being introduced in Congress.  As we noted in the latest WEU, energy companies are trying to prevent, or at least modify, taxes directed at them on carbon and methane.  Capital gains taxes are almost certain to rise, but that’s not all being considered.  Increases to corporate taxes are also on the agenda, and maybe special taxes on stock buybacks.  It is clear that capital is being targeted.  Equity markets usually don’t discount these sorts of events very well.  The market didn’t anticipate the Trump tax cuts, for example.  Thus, we probably won’t see the market take the taxes into account until they are passed.  This position makes sense; tax law is very complicated.  It’s better not to move until you know exactly what the final outcome is, but the budget will hang over the market for the next several weeks.  We will continue to monitor this situation as it unfolds.

But wait…there’s more!  The debt ceiling issue is coming at the same time we are dealing with the budget.  In reality, the debt ceiling is a formality.  The spending and borrowing have already occurred, but minority parties or the party out of the White House can use the debt ceiling as leverage.  This time around, the Democrats who control Congress could simply put the increase into the reconciliation bill and pass it on a party-line vote.  However, that creates a campaign issue for the midterms, and it already appears that a change in control is probable.  So, the Speaker wants to force a vote on the idea that the GOP leadership won’t vote to shut down the government.  Both sides look dug in, which likely means a crisis is in the offing.  In the autumn of 2013, when we had similar circumstances, we saw a short-term spike in T-bill rates.

In 2013, the combination of a government shutdown and a new Fed Chair led to a spike in short-dated Treasuries.  Although the Fed’s lending facilities in place today would likely prevent significant fallout, there is a risk of short-term volatility in the money markets. The bottom line is that the next eight weeks could be rocky.  We don’t think this situation will necessarily require defensive action in portfolios, but we are monitoring the situation closely.

Elections!  We have been keeping close tabs on the German elections, but that isn’t the only ones underway.  There are others of note.

Crypto:  The BIS wants CBDC, and regulators are pushing against cryptocurrencies.

China:  We are still trying to determine what common prosperity means, and new tariffs on China may be in the works.

Economics and policy:  Tax proposals are out, a couple of regional FRB presidents are in hot water, and manufactured homes are becoming popular. 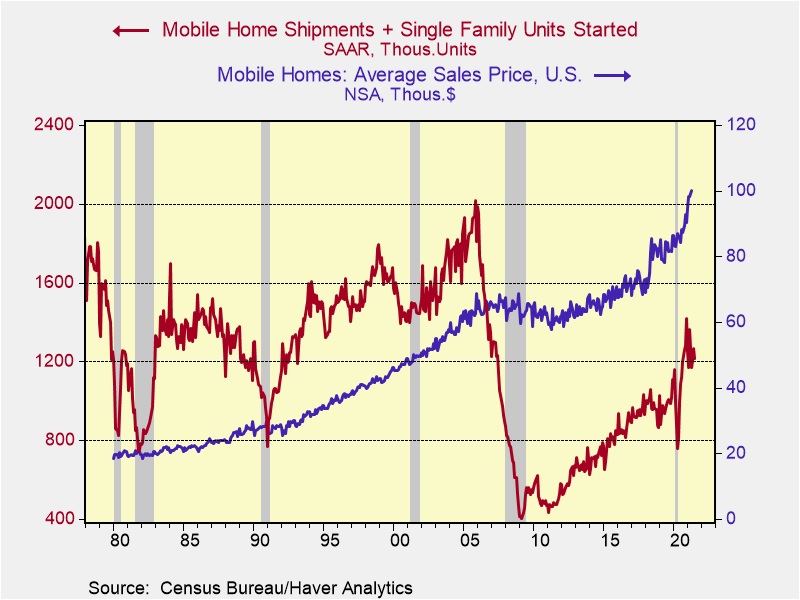 At the peak of the housing crisis, shipments and starts reached 2.0 million units.  As housing crashed, that number collapsed too, falling to 400,000.  When home prices began to recover, so did manufacturing and shipments, although levels remain below earlier levels.  The above chart shows prices moving up rapidly, and manufacturing and shipments are rising, although below levels one would expect given price levels.  It is likely that supply chain problems are affecting this industry as well.  Part of the problem is that local governments have used zoning to prevent the establishment of manufactured home parks.  At the same time, these homes are significantly cheaper than on-site homes and could solve the housing deficit.

COVID-19:  The number of reported cases is 224,712,819, with 4,632,043 fatalities.  In the U.S., there are 40,956,417 confirmed cases with 659,975 deaths.  For illustration purposes, the FT has created an interactive chart that allows one to compare cases across nations using similar scaling metrics.  The FT has also issued an economic tracker that looks across countries with high-frequency data on various factors.  The CDC reports that 456,755,755 doses of the vaccine have been distributed, with 380,241,903 doses injected.  The number receiving at least one dose is 209,437,152, while the number receiving second doses, which would grant the highest level of immunity, is 178,692,875.  For the population older than 18, 64.9% of the population has been vaccinated.  The FT has a page on global vaccine distribution.