Good morning and happy Friday.  Hurricane Delta is expected to make landfall in Louisiana today.  U.S. equity futures continue to trend higher this morning.  Since stimulus hopes are supporting the rally, we begin with commentary on the state of negotiations.  World news is next; we cover EU sanctions on Russia, U.S. sanctions on Iran, rising tensions in Cyprus, North Korea’s Saturday parade, and an update on Brexit.  With China still working through its Golden Week holiday, news flow is unusually slow, but we are seeing the CNY rally.  We wrap up comments with our COVID-19 update.  Being Friday, a new Asset Allocation Weekly, podcast, and chart book are available.  Here are the details:

Stimulus talks:  Although the two sides continue to talk, we are getting so close to the election that it is about impossible to get something passed before November 3.  In some respects, the basic outlines of a deal remain in place—House Democrats want a large fiscal program, while the Senate is much less enthused.  The White House continues to vacillate between no talks to wanting a big deal.  The current ploy is to offer small, targeted aid, e.g., to the airline or restaurant industries.  House Democrats are willing to consider such aid but only if it is part of a large package.  So, if the odds of a deal are so long, why are equities continuing to trade as if something is coming?  The consensus is that whoever wins in November will make stimulus his first order of business.  We agree with this idea, but getting an actual deal done may not be as easy as it looks.  The lack of stimulus is having an impact on the economy; there is growing evidence that the Q3 bounce[1] is stalling, and economists are now estimating that the labor market won’t reach the last cycle peak until 2023.  The inability to pass legislation will probably lead to a pause in growth. Equity markets are assuming that (a) the next government will be successful in lifting fiscal spending, and (b) the Fed will probably resume aggressive balance sheet expansion as the economy slows.

World news:  Lots of news on this front.  Here are the details:

China:  The CNY is rallying.  China’s economic recovery is outpacing much of the rest of the world, and it appears that it has been able to manage the virus. 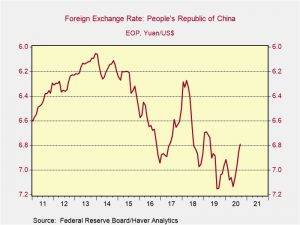 This chart shows the CNY/USD exchange rate on an inverted scale; a rising number indicates a stronger CNY.  We have placed a star at the current exchange rate.  Interestingly enough, a stronger currency will make tariffs increasingly effective.  Note that since early 2018, when the U.S. began implementing widespread tariffs on China, the CNY depreciated, offsetting much of the effect of the tariffs.  The recent recovery in the Chinese currency will tend to enhance the trade impact of the tariffs.

COVID-19:  The number of reported cases is 36,565,929 with 1,062,636 deaths and 25,484,014 recoveries.  In the U.S., there are 7,607,890 confirmed cases with 212,789 deaths and 3,021,252 recoveries.  For illustration purposes, the FT has created an interactive chart that allows one to compare cases across nations using similar scaling metrics.  The FT has also issued an economic tracker that looks across countries with high frequency data on various factors.  The Rt data is showing an increase in states with rising infections; 13 states are showing falling infections, while 38 states and the District of Columbia are exhibiting rising infections.