[Posted: 9:30 AM EDT] The IMF meetings are being held in Washington this weekend.  We would not expect anything too earthshattering out of these discussions.  However, the organization has calculated an interesting bit of data—the IMF estimates that the world has $152 trillion of debt, about twice the size of the global economy.  The IMF worries that this high level of debt will act as a constraint to growth.  That may be true.  However, a factor that seems to have been forgotten is that one party’s liability is another party’s asset, and one way the debt problem gets fixed is by forcing losses on creditors.  So far, the financial markets are treating the creditors as safe; for example, the Greek bailout seems to be designed, in part, to protect the German banks.  However, if growth becomes constrained enough, one way to end the constraint is to reduce the return on debt either through restructuring or repudiation.

One question we receive on occasion is, “What would the U.S. political situation look like if Trump had a normal personality?”  It is starting to look like the answer is coming from Britain.  PM May ripped the “international elite” (what we refer to as Davos Man) and laid out a plan for increased state intervention, workers’ rights and a “crackdown on corporate greed.”  May does have an advantage in that the Labour Party has essentially left the field wide open by moving so far to the left that the center-left has no one to occupy it.  So, May seems to be taking the position that the Tories are going to fill that gap.

This chart shows current crude oil inventories, both over the long term and the last decade.  For the month of September, oil stocks unexpectedly dipped 25.2 mb.  As the chart below shows, seasonally, we should see inventories rise as refineries begin their maintenance period.  But, inventories have steadily declined even with the drop in refinery operations.  Falling imports are mostly to blame for the drop in imports; the fact that we are talking about “TS Nicole” shows that this has been a very active tropical season.  However, if we are going to see an influx of foreign oil to the U.S. then we will likely need to see a narrowing of the Brent/WTI spread to force world barrels to the U.S.  To date, the spread has remained stable.  If inventories continue to fall, it suggests rebalancing.  At the same time, media reports indicate gluts in other markets.  So, we will see if that oil eventually finds its way to the U.S. 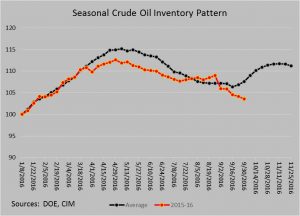 Based on inventories alone, oil prices are overvalued with the fair value price of $45.29.  Meanwhile, the EUR/WTI model generates a fair value of $49.24.  Together (which is a more sound methodology), fair value is $46.18, meaning that current prices are a bit above fair value.  A stronger dollar is probably the biggest threat to oil prices at $50.  Finally, OPEC is planning informal meetings on October 8-13 to discuss production allocations before the formal meeting on November 30.