[Posted: 9:30 AM EDT] It’s employment Friday!  We cover the data in detail below, but the short recap is that the payroll data came in well below forecast at 134k vs. estimates of 185k.  However, revisions added 87k, so the overall increase in payrolls did exceed estimates.  The unemployment rate dipped to 3.7%, below the 3.8% expected.  Wages were on forecast at 2.8%.  Overall, it’s a solid report and should support further increases in the policy rate.  We are seeing further weakness in bond prices and a stronger dollar.  Equities are mostly steady.  Here are other items we are watching today:

Brazil to the polls: Brazilian voters go to the polls Sunday in what has been a rather wild pre-election season.  For much of the run-up to the election, former president Luiz Inacio Lula da Silva was the front-runner, although he had been convicted of corruption.  The courts barred him from running.  With Lula out of the way, Jair Bolsonaro is leading in the polls.[1]  Bolsonaro, a former member of the military, is a controversial figure[2] running on a right-wing populist platform.  He was recently stabbed during a campaign rally, but has recovered.[3]  The electorate’s shift from favoring Lula, a hard-left candidate, to Bolsonaro, a hard-right candidate, is a pattern we have seen across the democracies of the world.  The center-left and center-right are losing support, seen as the vanguard of globalization and deregulation.  Voters want something different even if that “difference” is not ideologically consistent.  We would not expect a final result from Sunday’s election; Brazil requires a majority to take the presidency and if no candidate exceeds 50% (polls don’t suggest any candidate will) then a runoff between the two largest vote winners will be held on October 28.  Brazilian equities (in dollar terms) have been under pressure this year. 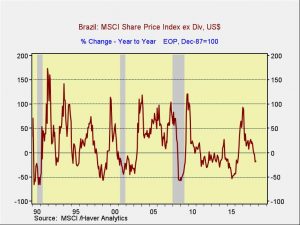 A Bolsonaro victory may be a catalyst for an equity rally as he would be seen, at least initially, as friendly to capital.

The disappearing journalist:Jamal Khashoggi is a Saudi journalist who has been living outside the kingdom recently on apparent fears of arrest.  Earlier in the week, he entered the Saudi consulate in Istanbul.[4]  He hasn’t been seen since.  The Saudis say they don’t have him but it is generally believed that the kingdom has detained him.  Khashoggi has been critical of Saudi Crown Prince Salman,[5] a leader who has shown he will not tolerate dissent.  We would not look for the U.S. to get deeply involved in this issue, but Khashoggi is well known and if he has been arrested it could be a public relations issue for Saudi Arabia.