[Posted: 9:30 AM EDT] It was a rather quiet night.  The VP debate came and went; polls suggest that Pence was better received but we doubt the interaction will change the election chances of either presidential candidate.  There are some interesting trends starting to develop that are worth mentioning:

Long-term yields are starting to rise.  The uptick in oil and expectations of a reduction in central bank accommodation are starting to have an adverse effect on long-duration bonds.  The FOMC seems poised to raise rates in December.  The BOJ has decided to set the yield on 10-year JGBs at 0%, which means tapering might occur.  Bloomberg reported yesterday that the ECB was considering tapering its QE, which sent long-duration Treasury yields even higher.  This morning, Reuters is reporting that the ECB isn’t considering such a move, although the formal QE program is set to expire in March.  There have been reports that ECB President Draghi is considering an extension of the program but perhaps at lower levels.

In general, there appears to be a shift in sentiment that suggests policymakers are going to move toward fiscal policy and away from monetary stimulus.  We believe this is probably justified, although it is remarkably easy to discuss fiscal policy in the abstract, but hard to implement.  Fiscal policy generally comes in two varieties, government investment and income enhancement.  The former is likely to have the most positive impact if administered correctly.  After all, the private sector continues to avoid investment and thus it makes sense for the public sector to fill any resulting gaps.  The problem is that the hardest action any society takes is investment because it requires some forecasting of the future.  There are monuments to poor investment everywhere; the shells of manufacturing plants that are no longer used are examples of private sector malinvestment, as are the “bridges to nowhere” on the public side.  Developing public investment that will actually foster efficient future growth is quite difficult.  Thus, the potential is high for building roads that don’t effectively move vehicles or dams no one wants.  The second variety of fiscal policy is income enhancement in the form of transfer payments, tax cuts, investment incentives, etc.  Giving households money during deleveraging likely turns out to be nothing more than a private to public sector debt swap.  In other words, if the government gives money to households that are deleveraging, they could simply use the cash to reduce their debt, improving household balance sheets but doing little for immediate growth.  As far as investment incentives go, if a project isn’t viable in the current interest rate environment then it probably won’t ever be feasible.  Still, the shift to fiscal policy, even if it disappoints, is probably bearish for long-duration debt.

We will have more to say on the oil situation in tomorrow’s comment when we recap the DOE data, but the OPEC plan to reduce supply has, at a minimum, put a floor under oil prices.  We expect oil to remain in a trading range but even keeping prices steady will tend to reduce the deflationary impact of weak oil prices. 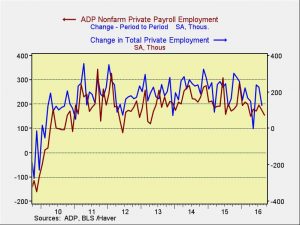 This chart shows the yearly difference in WTI.  Note that prices are now equal to last September, meaning that, on a yearly basis, oil is no longer acting as a damper for inflation.  It is important to remember that oil fell below $30 per barrel in February, so even if prices hold steady through Q1, it will raise the inflationary impact of energy prices.

Is Xi the new Mao?  The NYT is reporting that Chairman Xi is delaying the designation of his successor, perhaps laying the groundwork for staying beyond his two five-year terms.  If so, this would change the tradition of power transfers that were put in place by Deng.  Deng created a system in which the next leader is anointed during the second term of the current chairman.  This allowed for a smooth transfer of power as the new leader put his leadership team together.  If Xi doesn’t select his successor, this process of the next leader creating his power base won’t take place, allowing Xi more influence for the term that begins in 2022.  In fact, it very well could lead to Xi remaining in place, which would upset the transition process.  This change will likely raise internal tensions within the PRC leadership.  It is important to remember that Deng created this system to prevent another Mao from emerging.  If Xi does change this practice, it raises the potential for a new cult of personality and for internal party unrest.

Is Deutsche Bank becoming a nationalist issue?  We have noted the problems at Deutsche Bank (DB, $13.33, +0.35).  A Bloomberg article suggests that a narrative is evolving in Germany that suggests the problems at Deutsche Bank are really due to an attack on German values by foreigners.  The DOJ fine is being portrayed as retaliation for back taxes being levied against U.S. firms by the EU, and others are suggesting that the bank is the standard bearer for German firms and an attack on the bank is an attack on German business practices.  With elections due next year, this is a popular stance to take, especially with populist parties gaining ground.  At the same time, it would not be much of a stretch to see U.S. politicians taking up the cause of the DOJ against Deutsche Bank.  Unfortunately, political posturing will reduce policymakers’ ability to act if a crisis does develop.  Simply put, a global financial crisis will need international cooperation, not nationalism.  Although the problems at Deutsche Bank appear manageable, they could become a problem if the political class decides to “take a stand.”