For the second straight day, the British pound (GBP) is taking a “pounding.”  The proximate cause is PM May’s decision to make an Article 50 declaration by the end of Q1 2017.  However, the GBP decline is being assisted by hawkish comments from Fed officials, the most recent of which from Cleveland FRB President Loretta Mester, who suggested that a hike is necessary and also indicated that she would be amenable to a November meeting hike.  Currently, fed funds futures put the odds of a November rate hike at 21.4% and rise to 61.2% for the December meeting.  The dollar is up across the board on growing expectations of a rate move. 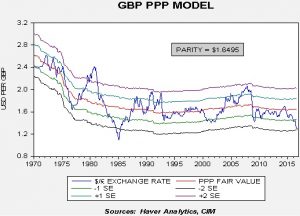 The chart above shows a purchasing power parity model for the GBP/USD exchange rate.  Parity models use relative inflation rates to measure the value of currencies, with the idea that a nation with higher price levels equalizes global prices via a weaker currency.  The drop in the pound isn’t due to rising inflation (although one might argue that Brexit will lead to higher future inflation), but mostly due to worries about economic disruption and easier monetary policy due to Brexit.  This chart shows that this is the weakest the pound has been against the dollar since the mid-1980s when Volcker’s tight monetary policy triggered a massive dollar rally.  In fact, this is the second weakest pound since currencies began to float in 1971.

Although the consensus is that the pound will weaken further due to the uncertainty surrounding Brexit, this analysis suggests the currency is already quite weak and the current depreciation will act as a stimulus for the U.K. economy.  Interestingly enough, the FTSE is up strongly today (+1.6% at the time of this writing).  To see the impact of the weaker pound, the FTSE is up 13.7% YTD; in USD terms, it is down 1.6%.  In other words, despite a strong equity market, the British equity market has been a loser for dollar-based investors.

Our research suggests that the FOMC does pay attention to the dollar, something it didn’t always notice.  The dollar’s strength makes the path of policy “normalization” much flatter and slows the pace of tightening.  Thus, a December hike is still likely if the dollar continues to rally, but a “once-a-year” tightening cycle would also be likely as well.

Also of note is that gold prices are sharply lower on the rising rate/stronger dollar trend seen today.  We continue to hold a favorable view of gold but a significantly stronger dollar would be a drag on prices.

Finally, we want to note a Reuters report today suggesting that the BOJ’s primary policy indicator has become the JPY/USD exchange rate.  Simply put, the aggressiveness of monetary policy will mostly be triggered by yen strength.  Policymakers do not want to see a stronger JPY and are suggesting they will take steps to prevent the currency from appreciating.  Although some analysts suggest the BOJ is out of tools, we argue that accumulating U.S. Treasuries in place of JGBs for QE would be feasible (though politically controversial).  Additionally, the BOJ’s decision to peg the 10-year at zero yield could lead the way to negative rates and a steeper yield curve.  Another overlooked possibility is that the Abe government could aggressively expand fiscal policy with a pegged JGB 10-year, a form of helicopter money, similar to how the U.S. funded defense spending during WWII.