The second episode of the Confluence of Ideas podcast is available!

Happy Halloween!  Not to scare, but today’s report is a long one as there is a lot of news to cover.  We have a deep dive on the Fed meeting.  China trade is good for the short term, not so good long term; the news is pressuring equities this morning.  We also have an update on Chinese economic data and our weekly energy update.  The Nationals win the World Series.  Here are the details:

Fed recap: As expected, the Fed did deliver a 25-bps rate cut.  The Fed’s statement and the press conference signaled that the U.S. central bank is likely to pause its recent rate reductions.  They did leave room to ease further if conditions warrant but, in the absence of weakness, cuts are complete for now.  The bank acknowledged weak investment but also noted that consumption remains robust.  In fact, yesterday’s GDP data showed that consumption pretty much dictated growth; the other three components of GDP, investment, net exports and government, broadly offset each other.  Thus, as long as consumption holds up, the economy will too.

There were two hawkish dissents, KC FRB’s Esther George and Boston FRB’s Eric Rosengren.  In our assessment, these two members are opposing cuts for different reasons.  George is a hawkish Phillips Curve adherent and likely opposes cuts on fears that they will be inflationary.  Rosengren is a “finance-sensitive” voter, and probably opposes the cut on fears that they will lead to overvalued equity markets.  Unlike the last two cuts, St. Louis FRB’s James Bullard did not want a more aggressive cut.  The lack of a dovish dissent suggests the voters believe they are not reacting to prevent a recession but are adjusting the policy rate to more closely match economic conditions.  In a recession, we would expect a return to ZIRP, so Bullard accepting this statement tends to support the notion of a “mid-course correction.” 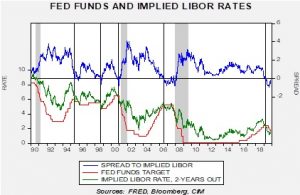 This chart shows the implied three-month LIBOR rate from the Eurodollar futures market along with the fed funds target.  The spread between the two rates is the upper line.  Inversions are shown by vertical lines.  In 1995, the Greenspan Fed abruptly ended a tightening cycle as the spread inverted and generally guided rates based on the behavior of the implied LIBOR rate.  The current spread, post the rate cut, is -10 bps.  Pausing at this level is defensible in the absence of recession.

Market reaction was interesting.  As the press conference wore on, we saw sentiment shift from hawkish to dovish.  The chart below is yesterday’s intraday price action in gold.  Note the “V” bottom; the initial reaction to the statement was bearish for gold, but there was a decided shift in sentiment.

When Powell suggested that the Fed was not likely to raise rates anytime soon, it was a tacit admission that the last three rate hikes were a mistake.  Here is the relevant comment from the presser:

Q: You have prepared this rate cutting cycle to the insurance cuts in the ’90s. The Greenspan fed took those cuts back after awhile. They raised rates again fairly quickly. I am curious what the onus is for doing that in this cycle. What would you make you guys decide it is appropriate to raise interest rates again?

A: So the reason why we raised interest rates is because generally is because we see inflation as moving up or in danger of moving significantly. We  don’t see that now. Inflation moved down in the first quarter of this year. We thought that that was due to some extent to transient factors. That turns out to have been the case. It has moved back up. But it seems to be settling in below 2%. So we really don’t see that risk. And inflation expectations have also kind of moved down and sideways both surveys and market based over the course of this– of really the recent months. And, you know, we think that inflation expectations are very important in driving actual inflation and we are strongly committed to achieving our 2% I inflation objective. So we are not thinking about raising rates right now…What we are thinking now is that our current stance of policy is appropriate.  Will remain so as long as the outlook is keeping with the expectations.

In other words, unlike the 1995 mid-course correction, it is unlikely these cuts will be reversed anytime soon.  That led to the bounce in gold, a lift in equities and a rally in fixed income.  The lack of fear from a Fed mistake could boost equities into the usual Q4 rally, assuming that there are no issues emerging from trade.

China trade: A new wrinkle emerged on the trade talks.  Chile’s President Pinera, due to persistent unrest, has cancelled the APEC leader’s summit that was scheduled for November 16-17.  Without this meeting, Presidents Xi and Trump will have to set up a specific meeting of the two leaders  There are reports that China is pushing back against large grain purchases, and is unhappy with human rights talks.  Despite the cancellation, negotiations continue and some sort of trade arrangement, a small deal, is likely.  However, what has reversed equity futures this morning are reports from China that indicate a long-term deal with the U.S. on trade probably isn’t possible.  If a major deal isn’t possible, a steady deterioration of relations between the world’s two largest economies is likely.

China economic data: Although we cover the data itself below, we note that the official PMI data came in soft.  The government’s official purchasing managers index fell to a seasonally-adjusted 49.3, short of expectations that it would hold steady at the 49.8 reached in September.  The index has now been under the 50 level that indicates expansion for six straight months, reflecting both China’s secular slowdown, and the U.S.-China trade war.  That bodes poorly for Chinese equities. 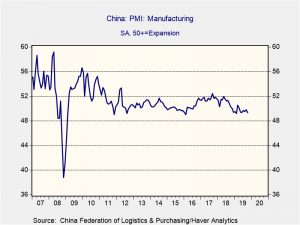 The services index fell to a three year low of 52.8.   In manufacturing, new orders and exports orders both declined.  There are reports that in the face of falling growth, Chinese manufacturing firms are using cash to purchase wealth management products.  Similar behavior was seen in Japan in the late 1980s.  One interesting sidelight; U.S. poultry equities are rising on reports China has lifted a four-year ban on U.S. chicken imports.

Perhaps even more unsettling is Hong Kong’s GDP; preliminary data shows the city-state’s GDP plunged 3.2% in the third quarter, far worse than both the expected decline of 0.5% and the second-quarter fall of 0.6%.  By conventional reckoning, that means the economy is now in recession, reflecting the negative impact from continued anti-China political protests, the U.S.-China trade war and capital flight. 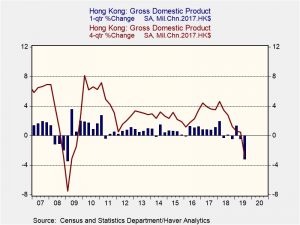 A signal of change: The House voted 405-11, in a non-binding resolution, to say the U.S. government should no longer associate itself with the denial of the Armenian genocide that occurred from 1915-23.   Turkey vehemently disputes this allegation, and the U.S. has generally avoided taking a position on this issue, especially after WWII, to maintain favorable relations with Ankara.  The fact that this resolution passed is a signal of how far relations have deteriorated.   Erdogan’s response was rather muted, suggesting the U.S. has “no right to give lessons to Turkey.”

United Kingdom: Labour Party leader Corbyn launched his campaign for the December election by vowing to change the country’s “corrupt” economic system and bring down the “privileged” rich.  To make his proposals as concrete as possible, he specifically named multiple high-profile individuals that he would target, including the Duke of Westminster and other landlords that he accused of hiking rents and tearing down economical apartments to build luxury high rises.

Eurozone: Eurostat today said Eurozone GDP continued to rise tepidly in the third quarter, posting an annualized growth rate of just 0.8% after stripping out seasonal and price effects.  That matched the second-quarter growth rate, but it was significantly lower than the 1.7% growth rate in the first quarter. 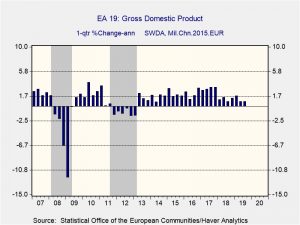 India-North Korea: The Nuclear Power Corporation of India has confirmed that malware was surreptitiously installed on the computer system of its newest nuclear plant.  Even worse, cybersecurity firms have already traced a large data extraction from the plant to the Lazarus Group of North Korean hackers.  The hack highlights the continuing risk that rogue states or groups could launch a sudden, unexpected cyberattack on critical facilities around the world.

Odds and ends: The U.S. has renewed waivers on Iran, allowing foreign companies to continue work at Iranian nuclear facilities.  This renewal might be a good faith gesture by the U.S. and could support talks.   Senate and House negotiators are continuing to work to avoid a budget led government shutdown, but conflicts over the border wall may still lead to a closure.  Farm bankruptcies are up 24% since 2011, as low prices and trade wars push farmers to the brink.  North Korea has launched missiles into the seas around the peninsula.  The new ECB president called on Germany and the Netherlands to boost fiscal spending.  Brazil’s president lashed out at the media on reports he is connected to the murder of a prominent opposition leader.  The UAW has a tentative deal with Ford (F, 8.54); if the rank and file approve, a strike will be avoided.  The EU will be officially between leaders starting tomorrow. The Islamic State is said to be issuing a statement soon, perhaps naming a new leader.  The BOJ left rates unchanged.

In the details, U.S. crude oil production was unchanged at 12.6 mbpd.  Exports fell 0.4 mbpd while imports jumped 0.58 mbpd.  The unexpected rise in stockpiles was mostly due to rising imports which offset improved refinery demand.

This chart shows the annual seasonal pattern for crude oil inventories.  We are now into the autumn build season which usually lasts into early December.  This week’s rise is normal. We continue to monitor the autumn refinery maintenance season. 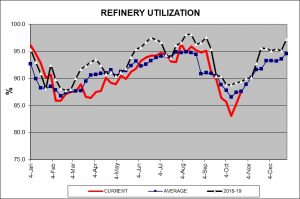 Based our oil inventory/price model, fair value is $61.13; using the euro/price model, fair value is $48.79.  The combined model, a broader analysis of the oil price, generates a fair value of $52.27.   We are seeing a clear divergence between the impact of the dollar and oil inventories.  Given that we are into the maintenance season, we would normally expect inventories to continue to rise.  Prices will remain sensitive to Saudi output and tensions in the Middle East.