[Posted: 9:30 AM EDT] Happy Halloween!  It’s mid-week and equity markets around the world are lifting this morning.  It looks to us like a normal bounce from a correction.  Will it have legs?  Probably.  Our position is that this drop was mostly a normal correction but not the start of a bear market.  The reason it probably won’t be a new bear is that bear markets usually coincide with recessions and the economy isn’t in trouble.  Here is what we are watching this morning:

Early orders: In the recently released Q3 GDP data, there was a notable increase in inventories. 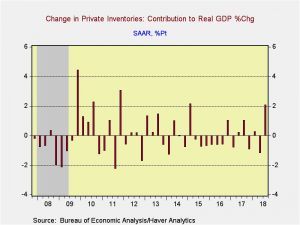 Inventories added 2.1% to the GDP reading of 3.5%; in fact, without inventories, the contribution from investment (inventory additions are considered investment in national income accounting) would have been just below zero.  At the time, we speculated that firms may have been accumulating inventories before tariffs lift prices.  The WSJ essentially confirmed this view.[1]  The article also noted that freight rates are rising for container ships, another sign of increasing demand.  This inventory build will support GDP into Q4; however, it may be a drag on growth next year.

China’s economic growth is weakening:[2] As noted below, we got the official ISM manufacturing data this morning and it showed a drop to 50.2 in September from 50.8 in August.  A bit of caution is in order; the Caixin manufacturing PMI, which comes from a private source, is published tomorrow and generally gives a better read on the economy because it includes a broader survey of companies.  The official data tends to represent only large firms.  What does concern us in the data is that export orders have fallen significantly.

Although export orders remain elevated, the orders index from the PMI does tend to lead orders by a few months and suggests that exports will soon decline.  This fits the above narrative that inventory accumulation will likely slow in 2019.

Patel v. Modi: The head of the Reserve Bank of India, Urjit Patel, is threatening to resign after relations with the government have deteriorated.[3]  The Modi government has recently invoked powers never exercised before to issue directions to the central bank.  The government has also issued a statement suggesting it honors central bank independence.  The Modi regime needs to avoid an open conflict with the RBA.  If markets become convinced that the Indian government is dictating monetary policy, investors will likely take a dim view of such developments and avoid investment in the country.

S&P warns U.K.: S&P Global Ratings has warned the May government that the odds of a no-deal Brexit have risen and this outcome would likely trigger a significant recession and a likely downgrade in Britain’s credit rating.[4]  We would agree with this assessment but still expect the U.K. and the EU to make a last-minute deal.  However, one development that may increase the likelihood of a no-deal Brexit is the fall of Merkel.  The German chancellor has pushed a position of moderation, unlike her French counterpart, and if Merkel does leave the political scene sooner than expected the lack of EU leadership could lead to an impasse in negotiations and a disruption.