The indictments: Although the indictments dominated the news flow yesterday, we still view this as a long process.  The primary concern is that the issue will become a larger distraction for the White House and make tax cuts more difficult.  The tax changes are already quite difficult.  Yesterday, we saw a trial balloon of phasing in corporate tax changes over five years.  That landed with a “thud” and was probably behind the Treasury rally seen yesterday.  Tax writers are fiddling with such ideas because it is becoming difficult to even come close to neutrality.  If the president moves to fire Mueller, it may trigger a constitutional crisis and that could have a detrimental impact on equity markets.  We don’t expect that outcome but the odds are rising from a low level.  The House is expected to offer a tax bill perhaps as early as tomorrow.

South Korea and China make up: When the U.S. put the THAAD anti-missile system in South Korea, China went “ballistic”[1] and pulled diplomats from Seoul.  Apparently, China has decided that the system isn’t that big of a threat after all.  We suspect that the threat has nothing to do with it.  Instead, China is probably trying to woo South Korea away from the U.S. by giving in on this missile system.  If a conflict is going to occur in North Korea, the U.S. will base some operations in South Korea.  If the Moon government, who leans dovish anyway, wants to avoid war on the peninsula, getting China to pressure Pyongyang makes sense.  And, if China wants to reduce the chances of war, influencing South Korea to oppose U.S. military actions would make sense.  We note that the U.S. will have three carrier strike groups in the area soon and, for the first time, has sent a squadron of 12 F-35A fighters to the Kadena AFB in Japan.  Although we haven’t seen the strongest precursor for war (removing American civilians from South Korea would be the clearest signal of an imminent attack), the U.S. is clearly moving military assets into place for a conflict.

A couple of thoughts about the PCE data: In reviewing the personal consumption data, a couple of concerns emerged.  First, the saving rate is rolling over. 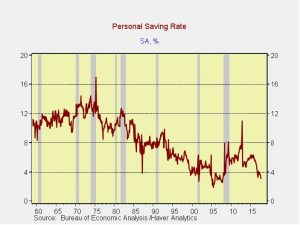 We have also seen a stall in deleveraging at the household level.  This is a “good news, bad news” situation.  The good news is that, at least in the short run, households are feeling more confident and are willing to spend down saving to make purchases.  We may be reaching the limits on how much more saving can fund consumption, and if consumption is going to rise in the absence of wage growth then debt will need to rise.  Taking on leverage with debt at current levels is probably self-limiting as well.

Second, we are seeing inflation-adjusted per capita income stall. 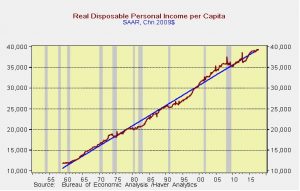 This chart shows real per capita income against trend.  It peaked in May and fell below trend in August.  The downtrend accelerated in September.  Although this number isn’t necessarily a good indicator of the business cycle, it should affect consumption.  Both these numbers suggest that the 3% GDP growth we are seeing is probably not sustainable.