It’s Fed day!  We discussed the FOMC meeting in detail yesterday; there’s a quick summary below.  It’s also GDP day (see the Economic Releases section below for details).  At long last, there will be elections in the U.K., and we also update news from China.  Here are the details:

The second episode of the Confluence of Ideas podcast is available!

FOMC day: As we noted yesterday, a rate cut today would shrink the spread between the implied yield from the two-year deferred Eurodollar futures and fed funds to near zero.  If the Fed is using the 1995 mid-course correction as an analog, there is a chance of one more rate cut, but a pause would not be out of the question.  Given the divisions on the FOMC, squeaking out one more cut is probably about all that Powell can muster.  How will the markets take a pause signal?  Not well unless the statement suggests the Fed will continue to support the expansion.  That language will likely remain, so we don’t expect a bearish surprise there.  Finally, it is worth noting that Powell’s press conferences have had a tendency to be hawkish. 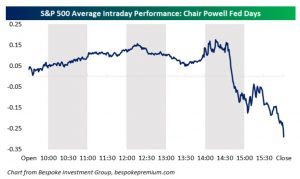 Before one decides to engage in a short-day trade, a word of caution—Powell has been learning as he goes along and thus this chart may more reflect his learning curve rather than a hawkish bias.  We will recap the meeting tomorrow.

China: Although the fourth plenum is continuing, there is little information emerging from the meetings, as is the custom.  In other China news, the regime claims to have eliminated all restrictions on foreign investment and will “neither explicitly nor implicitly” force foreign investors or companies to transfer technologies.  However, this new “directive” does not include investments or foreign firms on “negative lists,” which means industries that are barred from foreign involvement.  At first glance, this appears to be a major breakthrough.  However, it isn’t clear whether this directive has the force of law.  Nevertheless, this may be as much as the Trump administration can get and, in reality, even if a law is passed, enforcing such a law may not occur anyway.  If the U.S. takes this as a win, it is possible that progress on trade can occur.  At the same time, there are conflicting reports about a deal being ready for the November APEC meeting.

In another noteworthy development, Chairman Xi has apparently supported the development of a Chinese blockchain to ostensibly eliminate the need for the S.W.I.F.T. network.  That network facilitates money and information transfer between banks.  It has been used by the U.S. to enforce sanctions and China would like to undermine that power.  The Chinese version of a cryptocurrency would be one managed and monitored by the state.

Brexit: At long last, we will have an election.  On December 12, U.K. voters will go to the polls.  If a Tory government emerges, Johnson’s plan will likely be the structure of a Brexit deal.  If Labour can team up with the SNP, a second referendum will be held.  And, if the Liberal-Democrats win, Article 50 will be scrapped.  The wild card for the Tories is Nigel Farage’s Brexit Party.  He will argue that Johnson has failed to deliver Brexit; if a voter wants out of the EU, the Brexit Party is the only sure way to deliver that outcome.  For Labour, the problem is that the party has never fully defined its position on Brexit.  And so, there is a chance that working class older Labour supporters will drift to the Tories or the Brexit Party.  The Liberal-Democrats may be able to capture younger Remain voters from Labour as well.  Labour will try to make the election about anything but Brexit.  That might simply not be possible.

So, overall, the new election is a risky maneuver for all involved.  Current polls show the Conservatives with a sizeable margin; however, as the last election showed, the British electorate is fluid.  It does appear that the odds of crashing out of the EU are nearly zero and the choice is either a staged exit or remain.  Accordingly, we are seeing the GBP lift on the news.

Lebanon: We have been reporting about rising unrest around the world; Hong Kong, Bolivia, Chile and Lebanon have all been scenes of civil disorder.  In Lebanon, PM Hariri has given up and resigned.  Lebanese politics are finely balanced; Shiites, Christians, Sunnis and Druze all hold various parts of the government.  Protestors oppose this arrangement, seeing it as an impediment to progress.  However, it is unclear what will occur if the current arrangement unravels.  In the 1970s, the result was a bloody civil war.  Hezbollah, the Shiite group that is arguably the most powerful body in the country, has shown no interest in resigning from the government or participating in a reshuffle.

USMCA: There are fears that the impeachment proceedings will delay a vote on the North American trade deal.  However, another issue has emerged; the Trump administration wants to dictate where auto companies can make cars and parts, and receive duty-free treatment under USMCA.  This is a remarkable degree of interference into the sourcing and investment decisions of companies, but is a further signal of a swing toward an equality cycle.

The new subprime? Years after the financial crisis it appears that consumer installment loans have replaced the controversial sub-prime mortgage as debt vehicle of choice for borrowers with both low credit and savings. As opposed to a credit card, installment loans allow consumers to borrow money for specific purchases. Because rising wages have stagnated for workers, corporations have offered installment loans in order to boost profits and meet consumer demands. That said, the practice of issuing installment loans has come under increased scrutiny as some lenders have begun to take advantage of the lack oversight and have issued loans with interest rates well into the triple digits. The usage of these installment loans is a cause of concern as the economy debt burdens weigh on consumers’ willingness to spend. In addition, increased scrutiny of these instalment loans provides further evidence that economy policy is likely shifting away from favoring efficiency, and more toward favoring equality. Earlier this month, California passed a bill that would effectively limit the amount of interest charged on installments loans to 36% plus the fed funds rate for loans between $2,500 and $10,000.