Manafort, Gates indicted: Paul Manafort and his former business associate, Rick Gates, were indicted this morning and told to surrender to the FBI.  Latest reports indicate that Manafort and his former partner will face charges related to tax law, money laundering and disclosure of foreign lobbying.  The media over the weekend was frothy over who might get indicted, but Manafort has been on the special council’s radar for months.  The fact that we didn’t see anything beyond these two does suggest, at least for now, that the scope of the probe remains relatively narrow.  Gates remained with the Trump campaign until after the election, but Manafort was relieved months before November.  Because the indictments were narrow in scope, we doubt this news will have significant market impact, at least in the short run.

Realtor and home builders revolt!  The National Association of Home Builders and the National Association of Realtors have officially come out in opposition to the GOP tax plan despite the fact that the deduction for state and local property taxes was retained in the proposed tax bill.  The two groups wanted a homeowner tax credit in the bill as well, but bill writers scrapped the proposal.  Losing these two groups weakens the possibility of passing a tax bill; there is a realtor in nearly every congressional district and they will flood the airwaves with critical ads in the coming weeks.  It looks to us that if a bill is going to make it through the Senate, it will need to cut rates AND keep most deductions, meaning it will be a deficit builder.   In the coming weeks, we will have more to say about the impact of a larger deficit on the economy and financial markets.  In general, the risk of larger deficits is that it leads to higher inflation, but the effects are actually rather complicated.  This chart offers one clue. 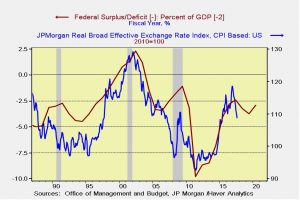 This chart shows that since the late 1980s, the fiscal account scaled to GDP tracks the dollar and leads the forex rate by two years.  The correlation isn’t perfect but it does suggest that if we are right and the deficit does widen then the dollar could be vulnerable to a broader decline, but not until 2019-20.

The Fed chair this week: The money is on Powell.

The betting site Predictit.org is indicating a more than 80% chance that Jerome Powell will be the next Fed chair.  Again, we warn that the president is prone to change his mind and we may see a surprise.  We also want to reiterate the message of this week’s Asset Allocation Weekly (see below); the FOMC will be unusually hawkish next year regardless of who is chair.

Madrid takes control: Spain’s public prosecutor has accused the entire former government of Catalonia of rebellion, sedition and embezzlement and the deposed Catalan leader, Carles Puigdemont, is calling for civil disobedience.  The polling data doesn’t really favor independence.  In fact, there was a large anti-independence demonstration over the weekend in Barcelona.  The risk is that Rajoy’s crackdown will build sympathy for the independence movement and independence-supporting candidates will win when new elections are held in December.  Again, if Rajoy wants to look at a successful playbook, the way Ottawa has dealt with Quebec Separatists is perhaps the best.

Barzani resigns: A few weeks ago, Iraqi Kurds voted for independence.  Now, the man who led that vote, Masoud Barzani, has resigned as the Kurdish region’s president.  The move has clearly backfired as Iran, Turkey and Baghdad have moved to quash Kurdish independence.  The U.S. has negotiated a ceasefire, but we are hearing that oil flows from the region have been halted.

China breaks up plot to assassinate Kim Han-sol: [1] Kim Han-sol is the son of Kim Jong-nam, the older brother of Kim Jong-un.  Earlier this year, the “Young General” apparently had his older brother assassinated.[2]  According to reports, two agents of the DPRK are in custody in Beijing and are being interrogated.  Kim Jong-un is likely worried that China might consider overthrowing him and put a relative in place to maintain the dynasty.  Thus, the current DPRK leader has an incentive to kill any potential claimants to the throne.