Italy: Financial markets are showing some signs of relief this morning following the populist government’s promise to lower fiscal deficits after 2019.[1]  This has the look of a common promise made around the holidays, when one says that dieting will commence right after New Year’s.  Promises are easy to make, austerity isn’t.  We strongly doubt there will be any change in policy but the mere promise suggests that the EU and Italy can avoid a direct confrontation in the short run.

Powell speaks: The Fed chair’s remarks were no surprise.[2]  Policy is largely laid out into next year, with another 100 bps of tightening expected.  Given the flux over policy structure we expect the FOMC to raise rates slowly until we see fed funds around 3.25%.  At that point, if the 10-year yield doesn’t rise significantly, the yield curve will likely curb any desire to raise rates further.

Yesterday, we described the Powell Fed’s communication policy as “less is more.”  We have media confirmation today.[3]

More on USMCA: In the new treaty, there is a clause that will further isolate China.  There is a provision that requires any nation in the agreement to give three months’ notice to the other parties if it enters trade negotiations with a non-market economy[4] (read: China).  If any of the three nations make a deal with a non-market economy, that nation can be driven out of USMCA.  Again, this isn’t much different than the goals of TPP but the enforcement is much different.  TPP attempted to isolate China by creating “carrots” for joining the free trade group.  USMCA uses a “stick” approach, penalizing nations in the pact for making trade deals with China.  We would not be surprised to see future trade arrangements (Japan and the U.S. are in negotiations now) contain similar clauses.

How close was it?[5]  Last week, there was an incident where the U.S.S. Decatur, an Arleigh Burke-class destroyer, and a Luyang-class Chinese destroyer came within 45 yards of each other as the Chinese vessel challenged the U.S. Navy ship in the South China Sea.  The U.S. and China are becoming increasingly confrontational on multiple fronts (as noted in the above comment) and the odds of escalation are rising.  At this point, we are not putting a high probability on open conflict, but the chances are rising and neither side appears willing to back down.

$15 per hour: Amazon (AMZN, 1971.31) made headlines earlier this week by announcing it would boost its base wage to $15 per hour.[6]  We suspect there are multiple reasons why the company made this move.  There is no doubt that labor market conditions have been tightening.  Companies tend to avoid moving salaries higher because it is hard to reduce them when economic conditions deteriorate.  When labor costs need to be cut, wage rigidity tends to lead to layoffs rather than wage cuts.  Thus, companies have been increasing pay in the form of bonuses and benefits which can be adjusted more easily.  Thus, Amazon’s move does press against that trend.  To some extent, this action may give Amazon a competitive edge; its distribution network isn’t all that labor intensive relative to its competition, so this move will tend to force its “brick and mortar” competition to raise wages too,[7] which will pressure their margins more than Amazon’s.  The policy and political optics are favorable.  Sen. Sanders (I-VT) was pressing the company with legislation designed to force it to pay for transfer payment support to its workers.  The hike was lauded by Sanders and will likely force other retailers to go along. 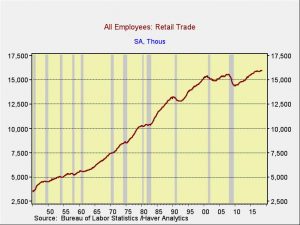 As the chart shows, the uptrend line was broken around the turn of the century, most likely due to the rise of online retailing.  We note that transportation and warehouse worker counts have been rising rapidly since 2010. 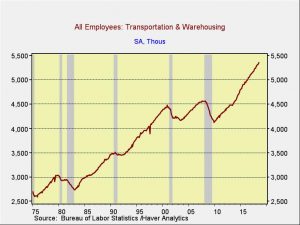 Assuming much of the rest of retailing is forced to match Amazon, we will see a sharp rise in wages for about 10.7 mm workers.  And, restaurants, which likely use the same labor pool that supports retailing, may face increased worker shortages.  This could boost wages at the low end and is something we will be watching closely in the coming months.

Trump and the king:President Trump noted, at a campaign rally last night, that the U.S. protects Saudi Arabia and it “wouldn’t last two weeks” if the U.S. were to withdraw that support.[8]  Although they would likely make it longer than a fortnight, over time, there is no doubt that the Saudis would be in trouble without U.S. security support.  Of course, the kingdom could seek help from others.  Russia would be a natural partner.  A more overt alliance with Israel is possible, too.  The onset of fracking has made the U.S. commitment to Middle East security obsolete and we have seen a steady decline in American interest in maintaining borders and organizing security.  The president isn’t happy with OPEC actions and current oil prices, albeit the recent rally is mostly due to the announcement of sanctions on Iran.  Still, higher oil prices are something of a mixed bag for the U.S.  Rising gasoline prices undermine consumer confidence (but not spending—this is the “pundit’s canard” because the GDP consumption data doesn’t care if you spend $5 on a slurpee and burrito or on gasoline…it’s still spending), but higher oil prices also boost investment activity in the oil patch and thus, unlike what we used to see, higher oil prices do act to support parts of the American economy.  The key takeaway here is that if Saudi Arabia can’t rely on the U.S. it will find other partners for security.  They may not be as effective or generous, but alternatives do exist.