[Posted: 9:30 AM EDT] Belgian political leaders were able to overcome Walloon’s opposition to the free trade deal with Canada and so, at the deadline, it looks like the agreement will be approved, assuming none of the other 27 nations decide to oppose the deal, too.  Most of the opposition to the agreement with Canada is due to the creation of an arbitration body that would adjudicate regulatory differences between trading partners.  For example, if a Canadian farmer wanted to sell GMO grain to a buyer in the EU in a nation that banned GMO grain, in theory, this panel could overrule the local law.  The possibility that local regulations could be nullified by a foreign nation has become a major problem for not only this deal, but TPP and TTIP as well.  We would not be surprised to see another member of the EU oppose this trade deal before it is signed.  If it does pass, it may be the last one for a while unless President Obama is able to push TPP through during the lame duck session after the November elections.

On a side note, there have been reports that a Russian naval battle group, which includes Russia’s lone aircraft carrier, the decrepit RFS Admiral Kuznetsov, was denied a port of call at the Spanish Port of Ceuta.  The Russian Navy wanted to use the port for refueling; NATO pressured Spain to deny access and Russia has apparently decided to withdraw its request.  This move by Spain and Europe is a bit of a surprise as it shows an unexpected degree of unanimity for NATO against Russia.  We will see if the Russian battle group can actually make it to Syria where it is expected that the RFS Kuznetsov will conduct air sorties against Syrian rebels.

This chart shows current crude oil inventories, both over the long term and the last decade.  We have added the estimated level of lease stocks to maintain the consistency of the data.  As the chart below shows, seasonally, we should see inventories rise as refineries undergo maintenance.  But, even with the drop in refinery operations, inventories have steadily declined.

As the chart below shows, imports have declined sharply.  Some of this is probably due to tropical storms which have affected shipping into the Gulf of Mexico.  It is notable that Mexican and Venezuelan exports were down sharply last week.  If this is the case, we may see a rebound as the tropical season comes to a close (the official end of hurricane season is Halloween).

As the chart below shows, the drop in imports has led to a contra-seasonal draw in oil inventories.  If stocks don’t rise in the coming weeks, it would be supportive for crude oil prices.  However, if the drop in imports is due to hurricane season, we should see a rebound in inventories over the next few weeks. 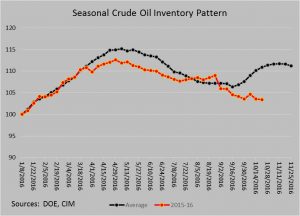 Based on inventories alone, oil prices are overvalued with the fair value price of $45.72.  Meanwhile, the EUR/WTI model generates a fair value of $45.24.  Together (which is a more sound methodology), fair value is $43.62, meaning that current prices are above fair value.[1]  Most likely, the divergence from fair value is due to hopes of an OPEC deal that would boost prices.  We are surprised to see oil hold its gains in the face of a rising dollar.  The best explanation is that OPEC has engineered this price strength.  However, this means that the oil market is quite vulnerable to any disappointment from the cartel. 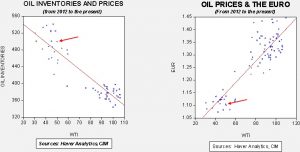 [1] It also suggests some collinearity issues, in that the two independent variables applied together yield a lower price than what each generates separately.  In fact, oil inventories and the euro are inversely correlated at -72.0% since 2012.  Thus, the dollar’s recent strength usually occurs with rising oil inventories.  However, so far, this hasn’t occurred, likely for the reasons noted above.