Establishment versus populist redux: After the election, we offered extensive comments about the differences within the parties, noting that the policies favored by the establishment (low taxes, deregulation, free trade, immigration) are not the policy goals of the populists (regulation to protect jobs, trade impediments, reduced immigration).  For much of the first year of President Trump’s term, he talked like a populist but governed like an establishment member.  Taxes were cut and regulation was reduced.  Equity markets clearly favored his policies.  Like his GOP predecessors, he seemed to give lip service to populist goals; he didn’t aggressively condemn alt-right groups, for example.  But, if one ignored the commentary, Trump governed mostly as an establishment GOP president.

That scenario began to change this year.  The administration became increasingly aggressive against immigration.  This has led to scattered complaints from some agriculture sectors.[3]  In late January, it became clear that the president was serious about implementing sanctions and changing trade.  Attacks on the Federal Reserve have become more frequent and pointed.  As policy turned populist, the president’s approval ratings have improved.[4]  The establishment may be starting to push back.  We note this morning the WSJ editorial board[5] has criticized the president’s handling of the Fed.  GOP lawmakers have been quietly unhappy with the president’s trade policy.[6]  For Republican politicians, openly opposing the president appears, at this point, to be a political suicide mission.  And so, as long as the president maintains his popularity with the base, the rest of the GOP will be forced to go along, occasionally implementing establishment goals when the president is not paying attention (e.g., the establishment FOMC appointments).

What investors need to consider is that a GOP president might not be good for equities.[7]  Although earnings are still strong, we have been seeing a steady drop in the multiple; rising interest rates do affect the P/E but ultimately it’s a measure of market sentiment.  Investors are becoming worried and thus stocks are under pressure even with good earnings.

We have worried for some time that a policy shift toward equality and populism was inevitable regardless of who is in power.  After all, capital has been gaining on labor since 1990 and is one of the reasons populism has been surging.  Although it’s still too early to tell, the policy mix of globalization and deregulation, supported by both the left- and right-wing establishment, is under threat.  It would be reasonable to expect that this pressure is expressed in the P/E. 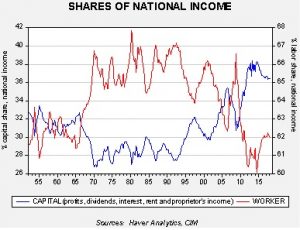 CNY under pressure:  The CNY fell to nearly 7.0 this morning, the weakest in 10 years.[8]  China has vowed to prevent a move above 7.0 by spending its foreign reserves.[9]   Chinese officials could use a weaker CNY to offset tariffs but fears of currency weakness will lead to capital flight.

[4] https://www.realclearpolitics.com/epolls/other/president_trump_job_approval-6179.html NB: the president’s approval rating bottomed in January, just after the tax cut.  After turning populist, his approval ratings have improved.