Yellen out?  Politico is reporting that the president has narrowed the field for Fed chair, eliminating Gary Cohn yesterday and also Yellen.  Although the source from Politico, Ben White, is generally reliable, in the same report, a source suggests that the president changes his mind often and so no one may really be out.  Still, Senate Republicans would like to have a Fed dominated by GOP members and therefore would prefer someone other than Yellen.  It is worth noting that the president recently visited with Senate Republicans and thus may have been swayed.  For the most part, we have seen this as a Powell/Taylor race for a while and, from our perspective, it’s really about who gets what seat.  Powell would be expected to be a continuation candidate; Taylor would likely be much more hawkish.  We note that some have argued that, theoretically, Taylor could be dovish.  The official Taylor Rule (different from the Mankiw Rule, which we detail often) is based on a formula that compares inflation to a target and GDP compared to potential GDP.  If Taylor were to conclude that the Trump administration’s deregulation and fiscal policies increase potential GDP, he could be dovish.  This was the argument Greenspan made in the 1990s; he believed that the tech revolution would boost productivity enough to offset rising wages.  Still, the Taylor Rule is widely calculated and if he were to manipulate the formula to justify current policy, the dream of “rules-based monetary policy” would be lost.  Thus, it seems reasonable to expect that if Taylor is chair, he will be hawkish.  The dollar rallied on the news.

ECB: The ECB generally did as expected; although rates remain unchanged, QE will be reduced from €60 bn per month to €30 bn per month, starting in January.  It will be extended to September.  In addition, the ECB will continue to reinvest maturing bonds, thus keeping the balance sheet level after QE ends.  Although this outcome was in line with expectations, European bond yields fell and the EUR dropped.  The ECB is intending to reduce accommodation but at a very slow pace.

Interest rates: We have seen interest rates rise recently.  It appears to us that the primary driver of this change has been expectations of tighter U.S. monetary policy.  This is coming from two sources.  First, the market is discounting that a new Fed chair will be more hawkish than Yellen.  Second, even if Yellen remains, the roster of next year’s FOMC will be decidedly more hawkish based on the policy stance of the regional presidents; this is the topic of tomorrow’s Asset Allocation Weekly.  We are seeing the deferred Eurodollar futures market implied yield rise to near-cycle highs. 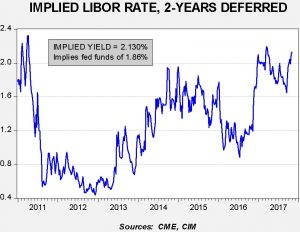 If Yellen is reappointed, which would be a modest surprise, we would look for a retreat in the above yield but probably not below this year’s lows set in early September.  This would put some downward pressure on the dollar and probably lower 10-year Treasury yields.

Catalonia to hold elections?  The regional Catalan government is set to call elections in a bid to stall a takeover by Madrid.  If calling elections doesn’t placate Madrid, PM Rajoy will likely invoke Article 155 of the Spanish constitution, which allows the central government to take control of a province to maintain the governmental integrity of Spain.  Tensions remain high but Rajoy should probably allow an election to go forward because there is a good chance voters will want to stay in Spain.  This is the message that comes from Scotland and Quebec; areas may want autonomy but actually leaving is usually a minority idea in a region.

This chart shows current crude oil inventories, both over the long term and the last decade.  We have added the estimated level of lease stocks to maintain the consistency of the data.  As the chart shows, inventories remain historically high but have declined.  The impact of Hurricane Harvey is diminishing as refinery operations recover.  We also note the SPR fell by 0.3 mb, meaning the net build was 0.5 mb.

As the seasonal chart below shows, inventories rose modestly this week.  It appears that we are “skipping” the usual autumn inventory rebuild period.  We did see a strong recovery in production after a short hurricane disruption the previous week.  Oil imports rebounded as well.   Still, we usually see much higher inventory accumulation this time of year and so it should be supportive for prices if it remains slow.

Refinery operations rebounded last week in line with seasonal norms.  If this continues, and we expect it will, it should be bullish for oil prices. 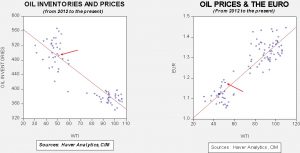 Based on inventories alone, oil prices are undervalued with the fair value price of $53.76.  Meanwhile, the EUR/WTI model generates a fair value of $63.42.  Together (which is a more sound methodology), fair value is $59.80, meaning that current prices remain below fair value.  For the past few months, the oil market has not fully accounted for dollar weakness.  However, now the markets are not even taking tightening inventories into account.  In general, without the expected seasonal lift in crude oil inventories, oil prices at current levels are attractive.

In other oil news, Saudi Arabia and Russia appear poised to extend output constraints through 2018.  The official meeting is held on November 30.  The kingdom has been vacillating on where, when and if on the IPO of Saudi Aramco.  The leadership’s concern appears to be tied to the disclosure rules that New York and London would require.  The Royal Family essentially owns the state oil company and uses its revenue as the funding arm of the government.  Going public wouldn’t necessarily end that role but it would make the diversion public.  The FT reports this morning that the Saudi Stock Exchange, the Tadawul, may be the sole listing venue for Saudi Aramco.  We would assume that reporting requirements would be minimal.  However, listing exclusively on the Tadawul would likely reduce the value of the firm due to the expected lack of transparency.  On the other hand, it will allow the kingdom to raise funds in a manner it can control.