[Posted: 9:30 AM EDT] Happy Friday!  Markets are trading quietly this morning.  We are watching Johnson’s attempt to bring elections, China/U.S. trade talks, Syria reports and Argentine elections.  And, the EU moves to standard time this weekend.  Here are the details:

Brexit: PM Johnson has called for elections on December 12.  Unfortunately for him, he doesn’t control the process.  Under rules passed in 2011, he needs 434 votes in Parliament to bring new elections.  There is no evidence to suggest he is even close to getting that number.  Comments from opposition party leaders suggest they won’t back new elections without passing the Halloween exit date.  They would like the EU to officially grant an extension; in a moment that would make Joseph Heller proud, the EU doesn’t want to establish the new extension date until the election issue is resolved.  There are some other ways an election could be called.  Johnson could, in a Kafka-like moment, bring a no-confidence motion against his own government.  That resolution would only need a simple majority to pass and the SNP would likely join the Tories against the Johnson government.  The risk from this outcome is that there would be a two-week period during which other parties could form a government, although the likelihood that Labour could cobble together a majority isn’t very high.  However, this approach requires the two-week period plus the minimum time to put an election together, and this maneuver would need to be done before next Thursday.  Finally, Johnson could bring a “one-line” bill to Parliament calling for an election; that would only need a simple majority but amendments (e.g., a referendum, lowering the voting age, etc.) could be added to it.

Simply put, the mess continues.  The odds of a hard Brexit have been diminished, but that’s about all the progress we have made.

China trade: U.S. and Chinese trade officials will talk today on the latter’s purchase of farm products.  Reports indicate that China will agree to buy these products only if the U.S. cancels at least some of the planned and existing tariffs.  The U.S. has already agreed to drop $250 bn of tariffs that were scheduled for October 15.  China reportedly wants the removal of a 15% tariff on $125 bn of goods that was implemented on September 1.  If accepted, that would reduce the tariffs to $250 bn of Chinese imports.  From our standpoint, this looks like a big “ask” from the Chinese side.  We suspect they will be willing to accept the current state of tariffs but will reduce planned purchases.

Meanwhile, VP Pence, playing the traditional role of an attacking VP, gave a highly critical speech of China as well as U.S. companies that accommodate China’s demands.  China strongly rebuffed the speech.  To some extent, Pence’s speech and the rebuttal may be simple politicking, rather obvious attempts to improve the negotiating positions.  However, it may also be a true reflection of the state of the relationship that may never return to status quo ante.

Syria: There are reports that Turkish troops and militias engaged Kurdish and Syrian forces, bringing Turkey and Syria into direct conflict.  This battle is, of course, a violation of the ceasefire.  Meanwhile, Russia continues to send military police from the previous battlefield of Chechnya into the Syrian-Turkish border area.  And, in another reversal, the U.S. is considering bringing some American forces back into the theater to protect Syria’s oil fields from capture by IS.  The Germans are floating a plan to put NATO troops into the buffer zone to separate Turkey from the Kurds; in an interesting development, Annegret Kramp-Karrenbauer, the heir apparent to Merkel and the current defense minister, has indicated that German troops might participate.  We doubt anything comes of this but the fact that it is even being considered is a significant change.  The power vacuum is being filled in a haphazard fashion and the eventual outcome remains in doubt.

Argentina’s elections: Argentines go to the polls on Sunday; it appears likely that the Peronists will return to power.  What is unknown is how the new government will actually govern.  There are two (unrelated) Fernandezes running; Alberto is running for president, while his running mate is the former president, Cristina.  Alberto is more center-left, whereas Cristina, both when she was president herself and when aligned with her late husband, is a populist.  We suspect Cristina will be the power behind the throne.  Financial markets have been betting on the latter for months, expecting another round of default and depreciation.

Things that gives us pause: With the backdrop of the World Series, Rob Drake, a MLB umpire (who, BTW, isn’t working the series), released a tweet suggesting he was armed for a “cival (sic) war” if impeachment takes place.  In the U.K., a survey showed that a majority of Leave voters believe that “violence toward MPs is a price worth paying for Brexit.”  A majority of Remain voters think that “protests in which members of the public are badly injured is a price worth paying to stop Brexit and remain in the EU.”  Even in Canada, divisions are becoming stark.  Within hours of the Canadian election on Monday, in which Prime Minister Trudeau retained power with strong support in the country’s east but very little in the west, activists in the western province of Alberta started calling for it to withdraw from Canada, in what they’re calling “Wexit.”  For now, Wexit still seems to be a fringe movement, but if it grows it would be a headwind for Canadian assets.  Political divisions are transforming into tribal ones, where compromise is becoming impossible and civil unrest is more likely.

United States-South Korea: Finance Minister Hong said South Korea will give up its WTO designation as a “developing country,” following up on U.S. complaints that countries like South Korea and Hong Kong don’t deserve the designation and the preferential treatment it provides in international trade.  The main negative impact is expected to be on South Korea’s farmers.

Greece: Parliament has approved a package of economic reforms aimed at boosting investment and accelerating economic growth.  The reforms include allowing firms to opt out of some collective bargaining deals and letting local governments outsource some services to private operators.  The new rules should add new impetus to Greece’s improving investment climate.

Saudi Arabia-Yemen: The Yemeni government signed a power-sharing deal with separatists in the country’s south, which should help limit the country’s civil war to the separatist Houthis in the north.  The deal strengthens the government’s position, but it doesn’t remove the Houthi and Iranian threats to oil facilities in allied Saudi Arabia.  The risk bid for oil is likely to remain.

Russia: The central bank today aggressively cut its benchmark interest rate to 6.5% from 7.0% previously, citing a sharp drop in inflation and weak economic growth.  The cut was Russia’s fourth this year, and it was twice as big as each of the previous three cuts.  The central bank also cut its 2019 inflation forecast to a range of 3.2% to 3.7%. 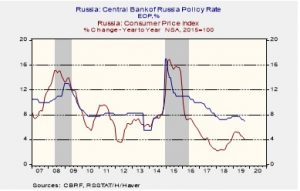