[Posted: 9:30 AM EDT] It’s the fourth day of what has been a tough week.  Yesterday’s equity market sell-off was clearly a shocker.  Although there is other news this morning, including the ECB meeting, we start today with thoughts about equities:

This data reads as follows—the higher the level, the greater the degree of polarization.  Our position has been that deep political divisions are the norm and the decline in polarization that began at the turn of the last century that accelerated into WWII is the outlier.  The pressures of the Cold War and the outside enemy of communism functioned as a unifier.  Soon after the fall of the U.S.S.R., polarization returned with a vengeance.

For financial markets, political polarization isn’t necessarily bad.  If it results in gridlock, legislative and regulatory policy tends to remain stable and leads to conditions that are supportive for investment.  But, in a nearly equally divided society, there is a certain attractiveness to jettisoning the restraints of the constitution and democracy.  We have seen this tendency before.  In the two decades before the Civil War, Congress more resembled an open brawl.  Are we there yet?  Although members are not openly fighting, the crowds around them certainly are.

It is rare that a market decline not tied to a clear financial event (major financial firm failure) or geopolitical event (war, major terrorist act) can be pinned to a single reason.  Given that caveat, what happened yesterday was, we think, due to a combination of events: 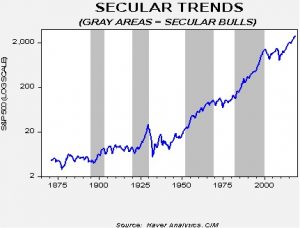 Each one of these previous secular bulls coincided with a new consensus.  With regard to the last two, for example, the 1952-69 bull was due to the idea that policymakers had resolved the conditions that caused the Great Depression and equities rose with that fear resolved.  The 1982-99 bull was due to the resolution of the 1970s inflation crisis.  We haven’t added shading but if we did it would be around 2013, when new highs were made.  However, we doubt that any societal issues have been resolved.  The big issues, resolving the superpower role and addressing inequality, have not been fixed.  Instead, the bullish impetus was mostly due to very accommodative monetary policy coupled with fiscal and regulatory policy that favored capital.  If that is the case, the removal of monetary policy accommodation may be a much bigger negative factor than it normally would.

Odds and ends: The ECB meeting was mostly a non-event.  Policy may start tightening next year if conditions continue to improve.  China is cutting rare earth production, something it has done before when unhappy with foreign behavior.[2]  China appears to also be reducing its buying of Iranian oil in front of the November sanctions.[3]