The new money market rules officially went into effect on Oct. 14th and, now that they are in place, the short-term money markets appear to be stabilizing.

Over the past year, the three-month LIBOR rate has increased by over 50 bps.  This is a significant tightening of credit which occurred due to changes in regulation.  As we have noted before, there were two notable changes to money market (MMK) rules.  First, for institutional prime money market funds, the net asset value (NAV) will no longer be fixed at $1.00 per share (meaning a money market fund could “break the buck”).  Second, prime and municipal money market funds can now temporarily halt withdrawals during periods of market turmoil, denying investors access to their cash for up to 10 days.

The new rules have led to a massive shift in money market fund allocation; over the past year, more than $1.0 trillion has exited prime money market funds and shifted to government funds, which do not have a floating NAV or any restrictions on access to cash. 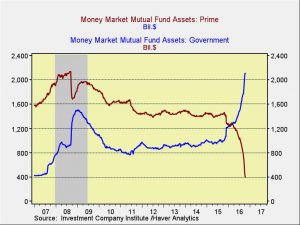 We suspect that the flows away from prime MMK and into government MMK are probably close to ending.  What bears watching next will be the impact of projected FOMC tightening in December. 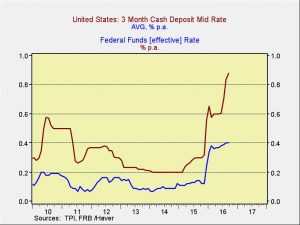 The chart above shows the spread between three-month cash deposit rates and the effective fed funds rate.  Currently, the spread is over 47 bps, the widest since the financial crisis.  If the FOMC raises rates and this spread is maintained, the market impact will be much stronger than the Fed probably expects.  In other words, the rate hike will be larger than it would have been prior to the change in regulation.  If, on the other hand, the spread narrows after the Fed raises rates, the market impact from Fed tightening will be less of an issue.  This is one of the factors we will be tracking after the next policy tightening.  Our expectation is that this spread is a permanent change due to the regulatory adjustments and so borrowing rates have already increased by 30 bps from a year ago.