[Posted: 9:30 AM EDT] Risk-on returned to the financial markets this morning, with the dollar and equities higher and Treasuries and gold lower.  The possibility that John Taylor could be the next Fed chair along with hopes of tax reform are boosting risk assets this morning.

Chair talk: There are a series of dueling stories in the media this morning on who the president will select for the Fed chair position.  The current conventional wisdom suggests that Powell is the front-runner, while John Taylor is running second.  Below is the latest on the topic from PredictIt, the decision-betting site.

Warsh was the front-runner until about two weeks ago; since then, his star has fallen rather quickly.  Powell makes sense as a chair.  He favors deregulation and is considered a moderate on policy.  However, he does not fit the “shake things up” framework of the president, so a surprise is possible.

Here is the history of the target and the Taylor Rule, calculated using core PCE: 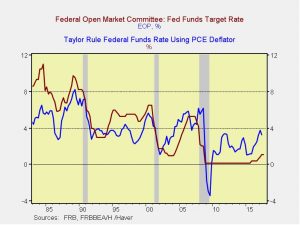 There has been an interesting trend in the relationship of the rule to the policy rate.  From 1983 to 2000, the policy rate target exceeded the Taylor Rule by an average of 178 bps.  Since 2000, it has averaged -136 bps. The current Taylor Rule rate would be 3.25%, roughly the level of the Mankiw Rule using involuntary part-time employment.  Greenspan mostly exceeded the Taylor Rule rate until the 2000 tech crash.  He and Bernanke clearly lagged the rule rate during the last tightening cycle.  Note that the FOMC moved much more quickly to lower rates during the last recession than did the Taylor Rule.  In fact, it’s rather clear the FOMC performed better than the Taylor Rule during the downturn by acting faster to cut rates, recognizing the gravity of the situation.  If one reads the meeting transcripts from 2008, there was a growing call to raise rates in August 2008.  We suspect the Taylor Rule was one of the reasons why some hawks were leaning in that direction.  In hindsight, that increase would have been toxic.

We are leaning toward Powell but it should be noted that the other open governor spots are important, too.  If Taylor and Warsh are offered governor positions as a consolation prize, Powell’s ability to manage to a consensus will be significantly undermined.

A budget deal: By a 51-49 vote, the Senate passed a fiscal 2018 budget resolution and the House has agreed to accept.  The vote was nearly by party line, with Rand Paul (R-KY) the only Republican voting against the measure.  The resolution is important because now that one is in place Congress can consider tax law changes without fear of filibuster in the Senate.  Although this is a first step toward tax reform, it is a rather small one; tax reform remains a difficult task.

More non-centrist political developments: If polls are accurate, the next PM of the Czech Republic will be Andrej Babis, a right-wing populist businessman.  Although the overall economic data from the country is rather good, rising inequality and political corruption is lending support to Babis.  He has run on an anti-corruption, anti-EU and anti-immigrant platform.  If elections pan out as expected, another EU government will have moved to the political fringe.  Meanwhile, in New Zealand, Jacinda Ardern, aged 37, will be the next PM; she is the leader of the hard-left Labour Party and another young figure at the helm of an important Western government.  She was able to gain power after the New Zealand Party, a party dedicated to providing government funding to the elderly, joined Arden to form a majority coalition.  Arden’s platform calls for social spending but is also anti-immigrant and wants to ban foreigners from buying property.[1]  Like many nations in the region, New Zealand has been favored by foreign capital flight.  In the election, the center-right (and former government leader) National Party received 56 seats, Labour won 46, the New Zealand Party won nine and the Greens eight.  The Greens didn’t join the coalition but agreed to caucus with it, giving it a majority.  The NZD dropped 2% yesterday on the news.

Merkel gives May a lifeline: Chancellor Merkel welcomed PM May’s initial offer of £20 bn and a transition deal on the EU’s terms to facilitate a smooth Brexit.  Although the hardliners in the EU want something closer to £60 bn or more, Merkel’s reaction probably means that a less onerous package can be negotiated.  The GBP rose on the news.

Retail MMK update: Yesterday’s market action in equities was consistent with recent patterns, which is that each pullback has been shallow and met with almost immediate buying.  Thus, pullbacks have been consistently unsustainable.  We attribute that characteristic to high levels of cash among investors waiting for the opportunity to invest.  As a result, small market declines are seen as rare opportunities for purchasing.  We have noted that the level of retail money market holdings has been a fairly good indicator of buying power. 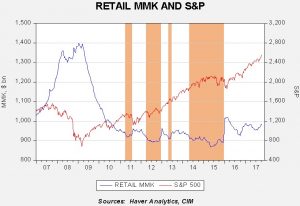 This chart shows the weekly Friday close for the S&P 500 along with the level of retail money market funds.  We have applied areas to the chart in orange—these represent periods when money market levels fell below $920 bn.  In general, when money market funds held by retail fall to “low” levels, which we define as $920 bn, equity markets tend to decline or stall.  We believe this occurs due to the lack of “fuel” for new buying.  Current levels are near $985 bn, meaning there is ample cash for buying and thus, barring a geopolitical event, elevated levels of liquidity would be consistent with shallow pullbacks and a “buy the dip” mentality, exhibited yesterday.

This chart shows current crude oil inventories, both over the long term and the last decade.  We have added the estimated level of lease stocks to maintain the consistency of the data.  As the chart shows, inventories remain historically high but have declined.  The impact of Hurricane Harvey is diminishing as refinery operations recover.  We also note the SPR fell by 0.7 mb, meaning the total draw was 6.4 mb.

As the seasonal chart below shows, inventories fell this week.  It appears we have started the inventory rebuild period sooner than normal this year due to the hurricanes.  However, inventories have declined over the past three weeks, which is a surprise based on the seasonal pattern.  Crude oil inventories usually rise into mid-November, so if this decline phase continues it should be supportive for crude oil prices.

Refinery operations fell sharply last week in line with seasonal norms.  This week usually represents the low in seasonal refinery activity, meaning that demand should rise on a seasonal basis going forward.  What was interesting this week was that U.S. production appears to have declined by 1.1 mbpd.  It isn’t obvious why this would have occurred and so we will be watching to see if this is a one-week event or part of a larger drop in oil production.  If production remains low, it is also a bullish factor for prices. 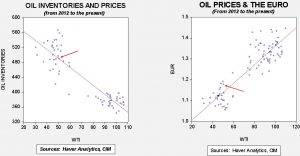 Based on inventories alone, oil prices are undervalued with the fair value price of $54.33.  Meanwhile, the EUR/WTI model generates a fair value of $63.44.  Together (which is a more sound methodology), fair value is $60.01, meaning that current prices remain below fair value.  For the past few months, the oil market has not fully accounted for dollar weakness.  However, now the markets are not even taking tightening inventories into account.  In general, without the expected seasonal lift in crude oil inventories, oil prices at current levels are attractive.

[1] We suspect terror has just erupted in Silicon Valley!