[Posted: 9:30 AM EDT] It’s another risk-off day so far this morning.  Residual worries about the economy continue to dominate.  Here is what we are watching this morning: 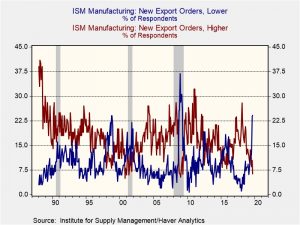 The ISM asks purchasing managers a series of questions about the various parts of their business operations.  The group asks if conditions are better/the same/worse or higher/the same/lower on various aspects of their business.  The indexes that are printed are compilations of these questions.  However, the data about respondents is also available.  The above chart looks at export order responses.  Note the sharp rise in manufacturers reporting lower export orders and the plunge in firms reporting higher export orders.  This is a significant breakdown and puts the export orders index at 41.0, the lowest level since April 2009.  The trade war is having an increasingly negative effect on the economy.

The ISM data along with soft construction orders have taken the Atlanta FRB’s GDPNow forecast for Q3 GDP down 40 bps; the current forecast is 1.8%. 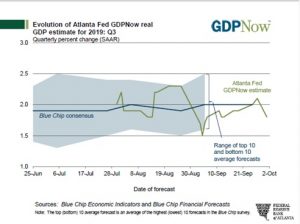 Brexit:  PM Johnson is expected to reveal his Brexit proposal, his “final offer.”  Rumors suggest he will call for customs checks on each side of the border, but inland (thus avoiding the “border” itself), with a time limit that will give both sides four years to actually work out a trade agreement.  We don’t see the EU accepting the deal; so far, it has rejected anything that has border controls.  By framing it as a final offer, Johnson will try to blame a hard Brexit on the EU.  We still think recent legislation will prevent a sudden Brexit, although it will require the EU to agree to another extension, which is likely to occur because the EU expects new elections and may hope that a new government might call off Article 50 altogether.  That scenario, however, is unlikely.  The most probable outcome is continued limbo; new elections probably don’t solve anything.  We expect that none of the parties would garner a majority in an election and any resulting government will be unstable.  The underlying problem is that the U.K. is nearly equally divided on this issue.  Remaining means a large part of the population believes they were denied their win in the first referendum, and leaving means that a large part of the population believes the country is making a huge mistake on a fairly small majority (at least considering the importance of Article 50).  In the meantime, we expect a stalemate—no exit on Halloween, new elections, inconclusive results.

More on repo:  The Fed is starting to grapple with the regulatory thicket that has led to the need for repeated repo operations to keep the money markets functioning.  First, as we suspected, the data shows that the large banks are holding the bulk of the cash in bank reserves.  The four largest banks in the U.S. held $377 bn of cash reserves at the end of Q2, well more than the remaining 21 banks in the top 25.  Large banks must meet a “liquidity coverage ratio” (LCR), assets that include cash and Treasuries.  However, the large banks are also required to meet intraday liquidity targets for which cash is the only asset that meets the regulation.  It looks like the requirements for safety have put a premium on cash and other liquid assets for the larger banks and the Fed has misjudged how much excess reserves the system needs to meet these requirements.  In other words, the repo crisis is starting to look like a regulation problem.  That doesn’t mean the regulations should be changed (after all, safety first, kids), but, given the regulations that are in place, the balance sheet needs to expand.  However, the Fed will likely be divided on expanding the balance sheet because it will appear to be another form of easing that may trigger an excessive response from the asset markets.  The other alternative is daily repo operations which is, at best, only a temporary solution.  We look for a balance sheet expansion but only after the Fed prepares the financial markets for the additional reserves.

Zuckerberg strikes back:  Last April, Facebook’s (FB, 175.81) CEO and founder, Mark Zuckerberg, suggested that the populist-left wanted to break up his company.  In comments to employees, he indicated he would fight such measures.  Senator Warren was the explicit target; she responded sharply to the comment.  How this all plays out remains to be seen; Facebook is an important medium for political ads, and it is possible the company could “tip the scales” to candidates with less interest in anti-trust actions against the firm.  We do note that Silicon Valley is getting behind Warren as her poll numbers improve.

Huawei:  Huawei (002502, CNY, 3.200) claims it has begun making 5G equipment without using U.S.-supplied components.  It is unclear how successful the firm has been with this action but if its claims are true then it would add to evidence that the tech world is dividing between China and the U.S., meaning nations will need to decide on which side they will ally.

Germans will be Germans:  As the ECB prepares to restart its quantitative easing program in November, the head of Germany’s Bundesbank, Jens Weidmann, warned that he would oppose all attempts to lift the limits on bond buying.  Currently, the ECB has given itself a limit of 33% of asset purchases, meaning the bank can only buy up to that limit with respect to a country’s government debt as well as debt in supranational and non-bank private sector debt.  The rule is designed to maintain some level of fiscal responsibility among member countries.

Mr. Weidmann’s comments highlight the growing dissent among central bankers in the Eurozone.  Rising trade tensions and sluggish growth have led a push for aggressive monetary easing to address these problems.  Ironically, Germany would likely benefit from monetary easing as the country has already contracted in two quarters within a year, and four quarters within the last five years.  Germany’s aversion to debt-fueled growth has added to market concerns of a prolonged slowdown, which have contributed to a drop in European equities.

Despite its reluctance to accept expanded monetary stimulus from the ECB, the German government has begun drawing up plans for a fiscal stimulus package if the economy were to approach recession.  The plan involves the government investing in projects that are designed to improve efficiency and boost confidence as well as stimulus in the form of tax write-offs and subsidies.  Although the stimulus plan is viewed as a safeguard in the event of a recession, it has been reported that parts of the plan have already been rolled out.

North Korea fires another missile: The launch came a day after the U.S. and North Korea agreed to resume nuclear talks.  The missile launch highlights the level of impatience that North Korea has in getting an agreement that would lead to sanctions relief.  Previous discussions about sanctions relief stalled in February after the president refused to remove all sanctions.  The U.S. has described the launch as provocative but has not formally withdrawn from the meeting.

Odds and ends:  Today marks the second anniversary of the Catalan independence referendum. In recognition of this day, thousands of protesters took to the streets to express their frustration.  Peru appears to be without a government as the president dissolved the legislature and the legislature appointed a new president.  Finally, a lesson in central banking—don’t tell people, especially depositors, not to panic.