September domestic housing data disappointed this morning, with multi-family housing starts falling 40.8% annually (see below).  Despite continued strength in single-family starts, housing in general is shaping up to be a drag on economic growth.  The chart below shows the Atlanta Fed GDPNow series.  It does not yet include this morning’s housing data.  We would expect the weak housing data to add to the lower-trending GDPNow forecast. 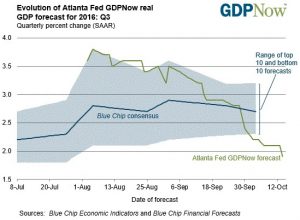 The chart below shows the revisions and contributions to the forecast.  Before the starts data, residential investment was the second largest drag on the economy after net exports. 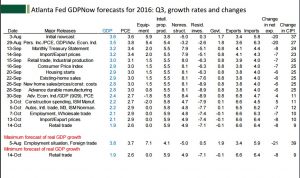