Note: After a long hiatus, we have resumed podcasting.  Our new series, titled The Confluence of Ideas, begins with an overview of “Hegemonic Stability Theory” (the program title links to our podcast page).  Our plan is to record a new episode about every 10 days, or three per month.  We hope you enjoy them—let us know what you think!

China:  Third quarter GDP was up just 6.0% year-over-year, compared with annual increases of 6.2% in the second quarter, and 6.4% in each of the two quarters before that.  The growth rate in the third quarter was not only weaker than expected, but it was also the slowest expansion in some 30 years.  The slowdown stemmed primarily from the U.S.-China trade war, cooling manufacturing investment and weaker income growth; along with the simple fact that the economy is much bigger, and more mature than it was during its peak growth period in the early 2000s.  Of course, China’s true growth rates are widely considered to be even weaker than the official data indicates.  The really intriguing thing about today’s report is that the government was willing to release such a weak number.  Along with its generally limited stimulus measures in recent months, this could reflect a deliberate decision to signal that slower growth is now acceptable and won’t necessarily lead to new fiscal, or monetary policy responses that might worsen the country’s debt load.  The data has therefore weighed heavily on Chinese stocks today, driving them sharply lower. 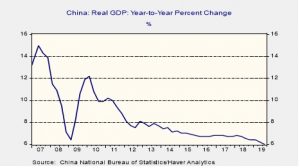 U.S.-China Trade:  Right before the latest round of U.S.-China trade talks early this month, National Economic Council Director Kudlow arranged for a group of outside economists to meet with President Trump and explain how trade uncertainty is hurting the economy.  Tellingly, Trump reportedly pushed back, blaming the Federal Reserve for not doing enough to boost the economy.  All the same, it is possible that the economists’ message helped convince the president to strike the partial deal with the Chinese.  The question is whether the message will stick long enough to prevent a reversion to Trump’s tough tactics against China.

Ceasefire:  Turkey has agreed to a five-day ceasefire on the southern border, which eases the threat of U.S. sanctions.  However, there are reports that suggest the agreement is already being violated as shelling and drone strikes have apparently occurred.  It appears to us that it is unlikely Turkey will “take its foot off the gas pedal” in this fight, so even this limited ceasefire probably won’t be strictly followed.

Brexit:  There isn’t a whole lot more to say on this topic.  The vote will occur at 4:00 pm (11:00 am EDT), on Saturday.   The law needs the vote of 325 MPs.  So far, Johnson has 287 with certainty.  The DUP’s 10 MPs have already indicated they won’t support the measure, and Johnson pushed 23 former Tories out of his party.  It is expected that a majority of these 23 (not included in the 287) will likely support the measure.  Thus, to push this through, he needs some Labour support.  The FT’s current estimate suggests neither side has this locked up; their headcount is 321 against, 318 for.  That means that Johnson must woo seven of the remaining 11 undecided MPs to pass his plan.  The prediction markets still have the measure failing, 40% to 60%.  However, the odds have improved over the past 24 hours, from a 26% chance of passage.  If the measure fails, the Benn Act requires that Johnson ask for an extension from the EU; we do expect it to be granted, but there is no guarantee it will be.  BREAKING:  FRENCH PRESIDENT MACRON INDICATES HE WILL REJECT AN EXTENSION.   If one of the remaining 27 nations in the EU votes against an extension, a hard Brexit on Halloween would be looming.  Our take?  The chances of more Labour defections is elevated and the chances of passage with a close vote may be higher than it looks, while the possibility of a hard Brexit may move some votes to Johnson’s side.

Japan:  Prime Minister Abe’s cabinet has approved draft legislation that would require foreigners to advise the government before buying more than 1% of Japanese defense-sector stocks.  The move shows how protectionism is moving beyond trade and into the realm of international investment.  As we’ve been discussing recently, similar moves are afoot in the U.S. Congress, with the potential to seriously alter the makeup of the U.S. bond and stock markets as well as the prospects for the dollar.

Japan:  Defense Minister Kono said Japan will send naval ships and patrol planes to the Gulf of Oman to help protect oil shipments through the area.  However, reflecting Japan’s growing confidence in its large and capable navy, the Japanese forces will operate independently rather than joining the U.S.-led coalition being formed to help with that task.

The strike:  Although negotiations between General Motors (GM, 36.19) and the UAW have reached a tentative agreement, the union has decided to maintain the walkout.  This is a bit unusual; normally, once a deal is reached, the union calls off the strike on the assumption that the rank and file will approve.  The agreement, from our reading, doesn’t appear to be all that firm on future jobs; there was no detail released on future investment, and no guarantees on bringing jobs back from Mexico.  Thus, even though there is more money for workers in the proposed contract, passage isn’t certain.

Odds and ends:  Bolivians go to the polls on Sunday to decide if Evo Morales will get a fourth term (a violation of the constitution).   Germany expresses concern over a U.S./EU trade conflict.  China has acquired a lease to the entire island of Tulagi, a major potential threat to Australia and New Zealand.   After the Senate failed to overturn a veto on wall funding, a budget battle looms that could shut down the government next month.  Saudi Arabia has delayed the Saudi Aramco IPO.  Protests against the jailing of Catalan-independence leaders continues to worsen, including violent clashes with police in Barcelona and elsewhere in the region.  However, the violence is starting to cause cleavages in the independence movement.  It is also further weakening the ruling Socialist Party ahead of the elections on November 10.

In the details, U.S. crude oil production was unchanged at 12.6 mbpd.  Exports fell 0.2 mbpd while imports rose 0.1 mbpd.  The rise in stockpiles was mostly due to continued declines in refinery demand (see below).

This chart shows the annual seasonal pattern for crude oil inventories.  We are now into the autumn build season, which usually lasts into early December.

The most important information from this week’s data is that we are now well into the autumn refinery maintenance season.

The drop in refinery utilization should end with this week’s data.  However, the decline refining is well more than normal and is having a bearish effect on oil prices.

Based on our oil inventory/price model, fair value is $62.41; using the euro/price model, fair value is $47.31.  The combined model, a broader analysis of the oil price, generates a fair value of $51.74.   We are seeing a clear divergence between the impact of the dollar and oil inventories.  Given that we are into the maintenance season, we would normally expect inventories to continue to rise.  Prices will remain sensitive to Saudi output and tensions in the Middle East.