[Posted: 9:30 AM EDT] Equity markets are enjoying a strong morning as financial markets prepare for a modest credit tightening in December.  Chair Yellen’s recent comments about allowing the economy to run hot were somewhat offset by Vice Chair Fischer yesterday when he cautioned against letting the economy and inflation move too far above target.  Overall, our take is that we will get a hike in December and maybe one move next year.  If our outlook is correct, it would be supportive for U.S. equities as it would probably lead to a weakening dollar.  That probably isn’t the path in the short run, but should emerge later in 2017.

With the release of CPI data, we can update our versions of the Mankiw rule model.  This model attempts to determine the neutral rate for fed funds, which is a rate that is neither accommodative nor stimulative.  Mankiw’s model is a variation of the Taylor Rule.  The latter measures the neutral rate by core CPI and the difference between GDP and potential GDP, which is an estimate of slack in the economy.  Potential GDP cannot be directly observed, only estimated.  To overcome this problem, Mankiw used the unemployment rate as a proxy for economic slack.  We have created three versions of the rule, one that follows the original construction by using the unemployment rate as a measure of slack, a second that uses the employment/population ratio and a third using involuntary part-time workers as a percentage of the total labor force. 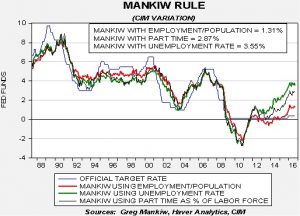 Using the unemployment rate, the neutral rate is now 3.55%.  Although this rate is well above fair value, it has dropped 27 bps over the past month as unemployment rises and the core CPI dips.  Using the employment/population ratio, the neutral rate is 1.31%, down 10 bps.  Finally, using involuntary part-time employment, the neutral rate is 2.87%, down 9 bps.  To some extent, the Mankiw models, based off the Phillips Curve, do suggest the FOMC is behind the curve but the degree of stimulus has actually eased over the past month.  Thus, the case for a rate hike has somewhat weakened, to an extent.  However, we don’t expect this will change expectations for a December hike.

Saudi Arabia is pricing its bond issuance this morning.  Although a successful bond issuance is neutral for oil prices, a case could be made that the kingdom is selling bonds to offset the loss of revenue that would come from cutting output, assuming prices don’t rise.  Of course, if the demand curve is more elastic than expected, we could see the revenue loss reduced.  We do note that, historically, commodity demand curves are price inelastic in the short run, meaning that a price cut leads to a loss of revenue.

As noted below, China’s borrowing is increasing at a rather fast clip.  There is a lot of commentary emerging on China’s debt growth and its sustainability.  We have deep reservations about China’s ability to grow at 6% without expanding debt to dangerous levels.  Perhaps the one saving grace for China is that the government can more easily assign potential losses because it’s a dictatorship.  Debt growth of this magnitude is bullish for global growth in the short run, but not in the long run.