[Posted: 9:30 AM EDT] The IMF gives details on weakening global growth.  Brexit is at a crossroads.  Trade tensions with China remain.  Update on Syria.  The National League has its pennant winner; the Cardinals, meanwhile, have much in common with private equity.  The latter spent billions on alleged unicorns that turned out to be donkeys wearing traffic cones on their heads; the Cardinals spent millions on alleged hitters…anyway, here are the details:

Global growth:  As we went to the deadline yesterday, the IMF had just released its updated global economic forecast for 2019 and 2020.  The details are sobering.  The body described the world’s economic situation as “precarious” and reduced growth rates for this year to 3.0%, down from 3.3% in its April forecast.  That would be the slowest growth since 2009.  Next year’s growth is forecast for modestly better, at 3.4%.  The IMF blamed the trade wars and slow monetary policy responses for the downgrade.  World trade is forecast to fall to a 2.5% growth rate, with 90% of the world’s nations looking for slower growth.   The U.S. saw its forecast rise to 2.1% from below 2% in April.  China is forecast to see growth fall below 6% this year. 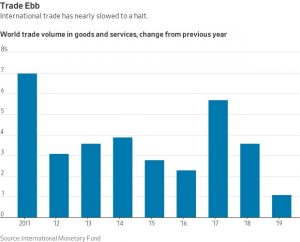 If trade tensions were to ease, growth would likely recover.  However, such a shift isn’t likely, or expected.   For most of the postwar period, a weaker U.S. economy could drag the rest of the world into lower growth, but the reverse wasn’t necessarily true.  However, due to increased global integration, there is a higher probability that a slower world economy will adversely affect the U.S.

Brexit:  Talks between the U.K. and EU continue, but the problems that bedeviled Theresa May’s Brexit plan have resurfaced for Boris Johnson.   The EU’s red line is no hard border on the Ireland/Northern Ireland frontier.  Johnson seems amenable to that outcome, but has to craft a plan that effectively jettison’s Northern Ireland without the Unionists discovering it.  So far, Johnson also hasn’t managed that hurdle, although the DUP in his government have not rejected the proposal out of hand.  In fact, the DUP may be swayed, in the end by money; there are reports that the Unionists are asking for “billions, not millions” to secure their votes.  Johnson’s problem, like May before him, is all about votes. His plan isn’t attractive enough to bring in votes from outside the Tories, so he needs the Unionists to pass the plan.  Another issue has emerged; Johnson’s vision of the U.K. after Brexit is far different than May’s.  The latter saw Britain apart, but similar to Europe; the former sees the post-Brexit U.K. as a low tax, low regulation alternative to Europe, an outcome that gives EU leadership the willies.  Additionally, there is another complication—Labour is warming to the idea that it might support Johnson’s plan, but only if it includes a second referendum; in other words, the Johnson plan would get tentative approval but only after the public confirms it.  The GBP has eased from yesterday’s strong rally on worries over talks.

China and trade:  The House has passed the Hong Kong Human Rights and Democracy Act; if passed, it would require the executive branch to determine whether political developments in Hong Kong justify its special treatment as a separate trade area.  Beijing, not surprisingly, isn’t happy with this development, threatening unspecified retaliation if it becomes law.  As we noted yesterday, Beijing is pressing the U.S. to rollback $ 50 bn of existing tariffs before agreeing to buy U.S. agricultural products.  Increasingly, there are doubts China will buy all these products anyway.

The Turkish incursion:  The White House continues to take criticism from both wings of the establishment, with strong exception being taken about the impact of sanctions.   VP Pence and SoS Pompeo are in route to Ankara to try and sell Turkish President Erdogan on a ceasefire.  We doubt the U.S. delegation will have much success.  The real worry is whether Russia and Turkey will end up in a direct conflict.  If that were to occur, it would involve a NATO member and the question is, if Article 5 were invoked, would the rest of NATO come to Turkey’s aid?  If NATO demurred, it would seriously question the security guarantee that NATO membership provides, and give Putin something he has desired all along; to break up NATO and give Russia the opportunity to retake eastern Europe.

Repo Rebellion: Following the Federal Reserve’s decision to expand its balance sheets, money market funds, who are among the largest holders of US treasury, have expressed resistance to the measure. Because money market funds are only able to buy assets with no more than 13 months of maturity, it would be more profitable for them to hold on to the US treasuries as opposed to selling its share of treasuries to the Fed and then going back into the market to buy debt with potentially lower yields. The resistance from money market funds will likely add to the angst of the Federal Reserve, as attempts are made to get cooperation from financial institutions to resolve the liquidity concerns in the repo market.

Odds and ends:  France has given a non to Albanian and Northern Macedonian bids to join the EU.  There are an increasing number of areas where a $100k income isn’t enough to buy a home.   Kim Jong un mounted a strong steed as a show to highlight the anger of the North Koreans over continued sanctions.  North and South Korea played to a 0-0 draw in a World Cup qualifying match in Pyongyang in front of an empty stadium.  Apparently, the North Korean leadership was uncomfortable with the potential loss to its southern rival so it implemented a news blackout and didn’t allow spectators.  In the Democratic Party debates last night, the tech sector was a prime target.   There are reports that confirm the U.S. responded to the Iranian attack on Saudi Arabia with a cyber strike.