[Posted: 9:30 AM EDT] It’s Columbus Day!  Treasury markets are closed but equity exchanges are open.  Today looks like a “upon further review day” as markets reverse Friday’s optimism.  Here are some of the details:

Trade:  After touting the progress made on Friday, the mood has shifted this morning.  China has announced it wants more talks before signing anything at the APEC summit.  Additionally, all that grain China said it would buy?  Apparently, Beijing hasn’t committed to making those purchases.  Meanwhile, the U.S. has delayed the tariffs that were due to start tomorrow; The December tariffs, however, are still on schedule.  Overall, the Phase One agreement doesn’t seem to have much to it.

The general takeaway is that Xi got a win last week.  Perhaps the most insightful comment came from an unnamed Chinese official, who noted China was fortunate that the Trump administration waited for more than a year before tackling the trade issue.  By the time the trade policy change began, it was too close to the next election.  Now the president can’t easily risk the economic disruption that comes from trade tensions.  This is a classic mistake presidents often make; they don’t realize their power is at a peak at the inauguration, and is mostly spent about 18 months later.  This White House focused on tax cuts and reversing the ACA; if the most important goal was changing the trade relationship with China, that is where the focus should have been from day one.

So, what now?  This situation has an air of May; recall that in May, we thought we were close to a deal only to have Beijing reverse its position.  China has even more incentive now to drag out negotiations, confident that election pressures will reduce Washington’s room to maneuver.  Overall, the trade issue with China will continue to hang over the financial markets; we are seeing weaker equities on these reports this morning.

As a side note, the EU is preparing new trade weapons against the U.S. that expand beyond the retaliation allowed by the WTO.  It appears that the WTO is rapidly becoming obsolete, no longer offering a framework to deal with trade disputes.

China:  According to the General Administration of Customs, September merchandise exports were down 3.2% year-over-year, driven by a 22.0% fall in shipments to the United States.  That helps explain why China has been so focused on resolving the trade dispute.  A trade deal now may help, but the damage from the slowdown in trade to date is probably already baked into the Chinese economy.  Euphoria on a trade deal could still give a boost to Chinese assets, but if the actual economic data remains in the doldrums, that boost may be limited or short-lived. 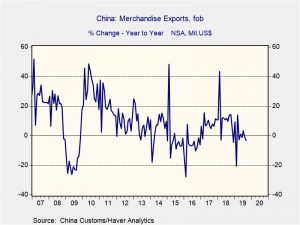 Brexit:  On Friday it also looked like progress was being made.  Those hopes are being dimmed in the early light of Monday.  Although nothing official has been released, there is enough in the press to suggest that Johnson would leave Northern Ireland in the U.K. customs union, but treat the tariffs on goods differently based on their final destination.  The EU, which wants Northern Ireland in the EU customs union, has called the plan “devilishly difficult.”  The good news is that both sides are still talking.  The bad news is that both sides remain divided, with little time to complete a deal.  The GBP fell on the news.

Turkey:  This week’s WGR explores the breakdown of the Carter Doctrine, the explicit commitment of the U.S. to stabilize the Middle East.  It’s breaking down at a rather furious pace.  Turkey is aggressively invading Kurdish controlled areas of Syria, even “bracketing” U.S. forces in artillery attacks.  The U.S. is removing our troops from the region.  The Kurds are turning to Russia and Syria for aid.  The U.S. is prepared to apply additional sanctions to Turkey; Germany has warned Erdogan to halt the offensive, and has cut off some arms exports to Turkey.

We have been forecasting for some time that the U.S. was allowing the world’s three prime conflict zones, the Far East, Europe and the Middle East to “thaw” after freezing them during the Cold War.  The Middle East is especially problematic because many of the nations in the region that currently exist did not evolve naturally, but were artificial constructs of the colonial era.  The U.S. studiously maintained these borders to maintain stability.  As the U.S. withdraws from the region, the evolution of statehood is developing which will be messy.  The U.S. withdrawal is creating massive power vacuums that others are rushing to fill.  Although oil prices are lower this morning, the overall geopolitical conditions suggest increasing instability, which should put a risk premium in the price at some point.

QE, not QE:  The Fed has announced it will buy $60 bn worth of Treasuries per month over the next six months to relieve funding pressure in the repo market.  Chair Powell has made it clear this isn’t QE, and focused on the fact that the Fed will only be buying T-bills.  This expansion of the balance sheet should allow the Fed to ease what has been daily open market operations to inject liquidity into the banking system.  Despite this balance sheet announcement, these open market operations will continue into Nov. 4th.  What caught our attention about this action is the timing.  The Fed could have simply kept up with the daily funding operations until the next meeting.  We don’t know if this means that Powell is concerned he can’t get enough votes to cut rates later this month and was worried that if no cut emerges, that news would have swamped the balance sheet expansion news.  We have noted rising opposition to further cuts and would not be surprised to see the next cut delayed into December.

Odds and ends:  Spain’s Supreme Court has sentenced a group of Catalan leaders to as much as 13 years in prison for their role in organizing the region’s illegal 2017 referendum on independence and subsequent declaration of independence.  Madrid has reportedly sent hundreds of extra law enforcement personnel to Catalonia in anticipation of widespread protests against the sentence.  In Poland, the conservative-nationalist Law and Justice Party handily won Sunday’s parliamentary elections with 44.4% of the vote.  That should give the party an outright majority in the legislature, albeit a slim one.  In Ecuador, after 11 days of protests against a decree eliminating a longstanding system of fuel subsidies, President Moreno has struck a deal with indigenous activists to withdraw and replace it with a milder version.  Since scrapping the subsidies would have saved $1.3 billion per year, the problem now will be how to meet the fiscal targets of Ecuador’s IMF debt program.  Japan is starting the recovery process from a Super Typhoon.  The UAW has increased its strike pay, suggesting the union does not expect a resolution soon.  The strike will bring lower job growth in the employment data for October.