[Posted: 9:30 AM EDT] Global equity markets are trending higher this morning; the rise is being attributed to inflation running a bit higher than expected in China (see below), reducing the issue of deflation.  China’s practice of exporting deflation has been a concern for some time, but mildly positive inflation is positive for the world economy.

Each year, we publish our geopolitical outlook for the coming year in December and an update at mid-year in June.[1]  In both recent reports, we have highlighted that the U.S. elections could create conditions that would increase geopolitical risk.  In particular, one issue we noted was that a significant shift in policy is likely after the inauguration.  A Trump victory would set the U.S. on a course to adopt a Jacksonian[2] foreign policy, which is essentially isolationist unless the U.S. is directly threatened.  A Clinton win would introduce a Wilsonian foreign policy, which is why she has been finding neoconservative support.  Currently, we are leaning toward a Clinton win (60% odds), although we believe most political pundits are underestimating the potential for a Trump victory.  Both Brexit and the Colombia referendum have shown the problem pollsters face from “preference falsification,” the situation where poll respondents lie to pollsters so as not to reveal their true preference.

This shift in foreign policy means that nations who generally oppose U.S. policy could either be facing a situation in which they can more easily project power (a Trump win) or facing a more determined American foreign policy designed to contain their aspirations (a Clinton win).  As polls shift to suggest a Clinton win, we have seen two trends.  First, there is evidence to suggest Russia is trying to sway the outcome of the election via Wikileaks and hacking.  It is understandable that Putin would prefer Trump; the GOP candidate has raised the issue of backing away from supporting NATO and appears friendly with Putin.  Clinton would be more traditional in foreign policy.  Second, President Obama has been reluctant to confront Russia and China over their power projection.  Bloomberg is reporting today that Russia is trying to solidify Assad’s position in Syria before the new U.S. president takes office, which suggests he fears that the next president won’t permit Putin and Assad from acting with the current degree of impunity.[3]  We note that Russia has sent Russian carriers to the Syrian coast, including the RFS Admiral Kuznetsov, its first ever deployment, and the RFS Yantar, a ship designed to disrupt communications.  In Syria, there is a history of communication disruptions before major offensives.  If Assad and Putin are planning a major attack on Aleppo, they may want the additional air support and will desire to cut off cell and internet before the attack.  We note the RIA Novosti news service is reporting that Saudi Arabia and the U.S. are allowing IS militants to leave Mosul to fight elsewhere and Hezbollah is alleging that the U.S. is supporting IS in eastern Syria.  We doubt the Obama administration is doing any such thing but it is consistent with Assad’s argument that anyone who opposes him is a terrorist.[4]

The bottom line is that the global geopolitical situation is becoming more fluid and this condition will not only continue but could accelerate as the elections unfold.  A Clinton win could lead to even more aggressive action as Russia, Iran and China try to take advantage of a closing window of opportunity.

This chart shows current crude oil inventories, both over the long term and the last decade.  We have added the estimated level of lease stocks to maintain the consistency of the data.  As the chart below shows, seasonally, we should see inventories rise as refineries undergo maintenance.  However, inventories have steadily declined even with the drop in refinery operations.  The lift this week is more consistent with seasonal patterns; we would expect at least three more weeks of accumulation. 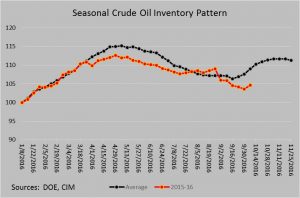 Based on inventories alone, oil prices are overvalued with the fair value price of $43.91.  Meanwhile, the EUR/WTI model generates a fair value of $47.44.  Together (which is a more sound methodology), fair value is $44.52, meaning that current prices are a bit above fair value.   Most likely, the divergence from fair value is due to hopes of an OPEC deal that would boost prices.  We are surprised to see oil hold its gains in the face of a rising dollar.  The best explanation is that OPEC has engineered this price strength.  However, this means that the oil market is quite vulnerable to any disappointment from the cartel.