[Posted: 9:30 AM EDT] Markets are quiet again this morning; we are seeing the dollar weaken a bit and bonds rally on the weaker than forecast CPI data.  On the other hand, retail sales were strong, although some of that is coming from hurricane distortion.  Here is what we are following this morning:

ECB—less but longer: Reuters[1] is reporting that ECB policymakers have agreed on a plan to begin tapering.  According to reports, the bank will extend the stimulus program by nine months but bond buying will be reduced to a range of €25 bn to €40 bn, down from the current €60 bn.  The EUR eased modestly on the news.  One of the problems is that the ECB is running out of eligible bonds to purchase so it needed to reduce its buying levels.  At the same time, if this action is taken, the ECB is signaling its desire to remain accommodative.  We view this action as modestly bearish for the EUR.

Tensions rise in Iraq: Iraqi forces are moving into the Kirkuk region, an area claimed by the Kurds.  According to reports, Kurdish forces are withdrawing in front of the Iraqi deployment.  Kirkuk is a key city in northern Iraq; both Kurds and Arabs see it as theirs (and both have controlled the town during various periods in history).  It is also an important oil city.  If open fighting develops, we would expect a disruption in oil flows and potentially higher prices.

Saudis buying Russian arms: Reuters[2] is reporting that Russia and Saudi Arabia are nearing a deal in which the latter will purchase the S-400 air defense system from Russia.  This is a sophisticated air defense system, considered one of the best in the world.  In fact, it seems odd the Saudis would need such a sophisticated air defense system because it isn’t obvious they face that sort of threat.  We suspect this is a gesture of goodwill and a signal of deepening cooperation between Russia and the kingdom.  Although the Trump administration has been working to improve relations with Saudi Arabia, it’s no secret that U.S. geopolitical interest in the region has lessened with the end of the Cold War and the advent of shale oil.  We would expect continued cooperation between the two states as Saudi Arabia adjusts policy to emerging U.S. actions.

Fed policy:  With the release of the CPI data we can update the Mankiw models.  The Mankiw rule models attempt to determine the neutral rate for fed funds, which is a rate that is neither accommodative nor stimulative.  Mankiw’s model is a variation of the Taylor Rule.  The latter measures the neutral rate using core CPI and the difference between GDP and potential GDP, which is an estimate of slack in the economy.  Potential GDP cannot be directly observed, only estimated.  To overcome this problem, Mankiw used the unemployment rate as a proxy for economic slack.  We have created four versions of the rule, one that follows the original construction by using the unemployment rate as a measure of slack, a second that uses the employment/population ratio, a third using involuntary part-time workers as a percentage of the total labor force and a fourth using yearly wage growth for non-supervisory workers. 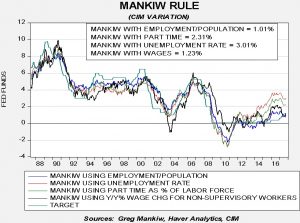 Although the core rate rose less than forecast, we suspect there is enough support for a December hike to keep the likelihood of a move high.  Fed funds futures still put the odds at 78% for an increase.

This chart shows current crude oil inventories, both over the long term and the last decade.  We have added the estimated level of lease stocks to maintain the consistency of the data.  As the chart shows, inventories remain historically high but have declined.  The impact of Hurricane Harvey is diminishing as refinery operations recover.  We also note the SPR fell by 1.8 mb, meaning the total draw was 4.6 mb.

As the seasonal chart below shows, inventories fell this week.  It appears we have started the inventory rebuild period sooner than normal this year due to the hurricanes.  However, over the past two weeks, inventories have declined, which is a modest surprise based on the seasonal pattern.

Refinery operations unexpectedly rose last week, which is a divergence from seasonal norms.  Strong product demand and attractive refining margins are supporting strong utilization.  The seasonal trough usually occurs next week; this week’s activity suggests that the maintenance season may be concluding early, which is bullish for oil prices. 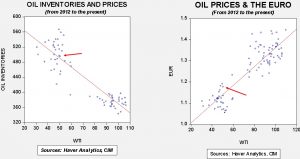 Based on inventories alone, oil prices are undervalued with the fair value price of $52.79.  Meanwhile, the EUR/WTI model generates a fair value of $63.15.  Together (which is a more sound methodology), fair value is $59.27, meaning that current prices are well below fair value.  For the past few months, the oil market has not fully accounted for dollar weakness.  If the oil market begins to recognize the dollar’s weakness, a broader rally in oil is possible.