[Posted: 9:30 AM EDT] Good morning! It appears the market has finally recovered after a two-day sell-off in global equities.  The yuan has also retreated following reports that the IMF and U.S. Treasury have concluded that China isn’t manipulating its exchange rate.  Here are the stories we are following today:

Brexit deal close? On Thursday, British Prime Minister Theresa May is rumored to have briefed members of her inner circle that a Brexit deal is imminent.[1]  The primary roadblock to negotiations was ensuring that there is no hard border separating Northern Ireland.  The compromise, nicknamed the “back-drop plan,” has come under scrutiny by Tory Eurosceptics and the Democratic Unionist Party (DUP).  In this proposed plan, the UK would remain in the customs union “temporarily” but without a determined end date and Northern Ireland would remain part of the single market.  Tory Eurosceptics, who have been arguing for a clean break from the European Union, fear that the arrangement will keep Britain in the EU forever, whereas the DUP, a party from Northern Ireland whose support allowed the conservative party to form a government, fear that the deal could place their region at a disadvantage.  As a result, the party has threatened to not support the Brexit deal.  The controversy surrounding Brexit raises the likelihood of snap elections in the UK in the near future.  We continue to monitor this situation.

China isn’t manipulating yuan: On Thursday, it was reported the staff of the Treasury Department informed Treasury Secretary Steve Mnuchin that the Chinese government is not manipulating its currency.[2]  This report is also in line with findings from the IMF, which stated that the yuan is “broadly in line” with China’s economic fundamentals. [3]  If this conclusion is accepted by Mnuchin, it will likely reduce tensions between the two countries prior to their meeting at the G20 summit.  President Trump has consistently labeled China a currency manipulator, therefore we do not expect him to agree with the findings.  Nevertheless, this report reduces the likelihood that currency manipulation will be a sticking point in trade negotiations as Treasury Mnuchin suggested it would earlier in the week.[4] 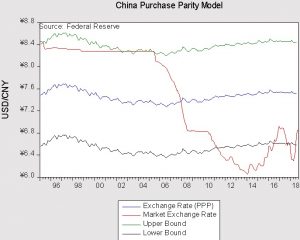 The chart above shows the fair value of the yuan based on our purchase parity model.  Currently, the yuan is valued at ¥6.92 to the dollar compared to our model forecast of ¥7.51.  Although there has been some devaluation of the yuan over the past several months, the model suggests the yuan is currently trading within its normal range.  The dollar strengthened against the yuan following the release of this report.  The chart below shows the overnight change in the yuan.

Khashoggi disappearance: The disappearance of Washington Post journalist Jamal Khashoggi has led to diplomatic tensions between the U.S. and Saudi Arabia.  There are rumors that the journalist, who was known to be a staunch critic of the kingdom, was killed inside the Saudi consulate in Istanbul earlier this month.  The alleged killing has left members of Congress uneasy; as a result, a group of senators have begun pushing for the halt of a proposed arms deal between the U.S. and Saudi Arabia.  President Trump has stated he is currently investigating the disappearance of the journalist but does not support suspending the arms deal.  Saudi Arabia has denied any involvement in the journalist’s disappearance but Turkey claims to have video and audio evidence suggesting otherwise.  Saudi Arabia has been known to have little appetite for Western criticism as Canada has learned firsthand earlier this year.  Accordingly, there is growing speculation that Saudi Arabia could turn toward Russia and China for arms deals in the event that Congress does not approve this one.