[Posted: 9:30 AM EDT] The big news overnight was that PM May will allow Parliament to debate on her plan to exit the EU.  The GBP rallied strongly on the reports.  However, there is nothing to suggest that she is planning to let the legislature vote on Brexit.  There is a constitutional dispute in the U.K. over this issue.  A number of legal scholars in Britain are arguing that the referendum on Brexit isn’t really binding and only an act of Parliament can authorize an Article 50 declaration.  An Article 50 declaration begins the process for the U.K. to exit the EU.  Thus, in order to declare Article 50, Parliament would need to vote on the measure and it is quite possible that an act to authorize Article 50 would fail given the current makeup of the U.K. legislature.

May seems to disagree with this legal position and is indicating that she has the authority to declare Article 50 without an act of Parliament.  The basis of this argument is the “Royal Prerogative,” which gives the state executive power to act without permission of the legislature.  There is some dispute over who actually now has this power; although historically reserved for the sovereign, in the modern era some have suggested it resides with the actual head of state, the prime minister.

At 2:00 EDT, the Federal Reserve will release the minutes from the September meeting.  Although the heavily edited discussion is always closely scrutinized, this one will come under particular focus due to the growing divergence of views within the FOMC.  As noted before, we had three dissents to not raising rates at the September meeting, but the dots plot showed that three participants wanted to leave rates steady for the remainder of the year.  Fed fund futures are signaling a 68% chance of a rate hike at the December meeting.  The strength we are seeing in the dollar (which is, in our opinion, behind recent equity market weakness) is due, in part, to expected tightening.  However, the deferred Eurodollar futures are putting the terminal rate at 100 bps two years from now.  That suggests a hike this December and one next year.  Barring more aggressive easing by the other G-7 central banks, this strength in the dollar will be difficult to maintain.  In general, we look for dollar strength into year’s end but a retreat thereafter.  We will have more to say on this in the coming weeks in the Asset Allocation Weekly. 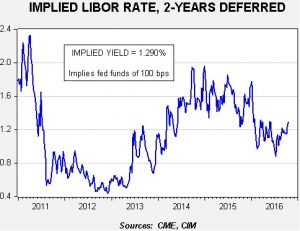 This chart shows the implied three-month LIBOR rate two-years from now, based off the Eurodollar futures.  Note that after Chair Bernanke introduced the idea of tapering in May 2013, the implied rate began to rise rapidly in anticipation of a withdrawal of monetary stimulus.  After the December 2015 rate hike, expectations began to fall rapidly and are currently suggesting the Fed will reach 1.00% for the fed funds target and hold that level.  Since the dollar’s rally was mostly precipitated by rates 80 bps higher, we would look for a moderation in the greenback next year.