[Posted: 9:30 AM EDT] As the Nationals staged a remarkable comeback to earn the right to play the Cardinals for the National League pennant, the financial markets were roiled over conflicting stories of the trade talks.  Turkey threatens the EU.  The EU issues an ultimatum to Johnson.  The ECB and the FOMC are divided. Here are the details:

A night of whipsaws:  Equity futures had a wild night.

This chart shows December S&P futures intraday trade.  Last night as the Cardinals were finishing off the Braves, futures plunged on reports the trade talks were not going well.  The China negotiation team was considering leaving early.  Then, around 8:00, there were reports that China might agree to a currency pact similar to the one considered last May.  As the chart above shows, equities rebounded on the news.  The dollar is weaker this morning on talk of the currency pact, although in reality, the agreement would really do nothing more than ask China to fix the CNY/USD rate.  We doubt China would maintain that rate if the U.S. expanded tariffs.  The Trump administration then moved to increase the number of licenses for Huawei (002502, CNY, 3.25) which is viewed as a minor concession.

All these actions and counter actions make it difficult to tell what is really going on.  We suspect the U.S. side would prefer to avoid the market downdraft that will likely occur if the talks lead nowhere.  At the same time, trade has been an area of strength for the administration; despite differences on the negotiating team, they have mostly held a united front.  We suspect a “mini-deal” might break that unity and is something to be avoided.  The focus today will be on the talks; we think the likelihood of a mini-deal is less than the market expects (hence the sharp decline last night), and thus if the negotiations end with nothing of substance, look for short-term equity weakness.

Turkey:  The media is covering the dissention between the president and numerous advisors and senators in great detail.  We won’t go over them here.  There are three items that we think are important about this event.

Divided central banks:  The Fed minutes showed the FOMC divided on policy.  There was clear concern about the trade war.  We think the worry is correctly placed, but monetary policy might not be very effective in countering it.  There was one surprise in the minutes.  There wasn’t as much discussion about the repo issue and the balance sheet as we expected.  This fact is a bit unsettling, as it suggests the leadership may not fully appreciate the gravity of the situation.  At the same time, there was a focus on the inflation mandate with some indications the FOMC might lean toward an average inflation target.  This would mean easier policy going forward.

Meanwhile, it is looking a bit like Mario Draghi “went rogue” at the last policy meeting.  The decision to restart QE came over the objections of bank officials, the technocrats that provide research and support for the members.  Given the divisions on the ECB, we will be watching to see if Legarde can maintain this policy direction, or if the staff and the northern Europeans will curb the policy ease.

Brexit:  As we have noted, our path going forward is that no deal will emerge before Halloween, the U.K. will ask for an extension of Article 50 into late January, and new elections will be held in the U.K. to establish a mandate for moving forward.  In every forecast, there is a risk of error.  Such a risk is emerging.  As PMs Johnson and Varadkar plan to meet today, the EU has issued an ultimatum—either the U.K. accepts that Northern Ireland will remain in the customs union, or there is no withdrawal agreement.  We don’t think Johnson will accept the customs union idea, so the next outcome is that the EU would see no point in giving an extension causing a hard Brexit to occur on Halloween.  We doubt the EU really wants an unmanaged departure but that might occur.  At the same time, we want to reiterate that we still believe the path we have outlined is the most probable outcome.

Bank rules:  The Fed began easing rules for smaller banks, which will reduce the regulatory burden and capital rules, about a year ago.  It is now extending these rule changes to foreign banks with operations in the U.S.

Taiwan:  In light of the turmoil in Hong Kong, Taiwan President Tsai Ing-wen gave a speech defending the island’s independence.  This talk will likely get the attention of Beijing, and it won’t be well received.  We will be watching to see how the PRC retaliates against Tsai for the comments.

China:  Highlighting the hard choices Western governments and companies have to make now that the political and economic ambitions of China have become more clear, Apple (AAPL, 227.03) has removed an app criticized by Chinese state media for being a tool of anti-China protestors in Hong Kong.  In this example, at least, it appears the company has decided that staying in the good graces of the Chinese government, and preserving commercial opportunities in China is more important than defending traditional Western values, like the free flow of information.

With trends suggesting the world’s economy, financial markets, and technological system will bifurcate into a Chinese-dominated bloc and a U.S-dominated bloc by 2030, Swiss private bank Julius Baer has issued a report arguing a robust portfolio will require diversifying across both blocs.

In the details, U.S. crude oil production rose 0.2 mbpd to 12.6 mbpd, a new record.  Exports rose 0.5 mbpd while imports fell 0.1 mbpd.  The rise in stockpiles was mostly due to rising output and continued declines in refinery demand (see below).

This chart shows the annual seasonal pattern for crude oil inventories.  We are now into the autumn build season which usually lasts into early December.

The most important information from this week’s data is that we are now well into the autumn refinery maintenance season.

The drop in refinery utilization should end next week and rise soon after. 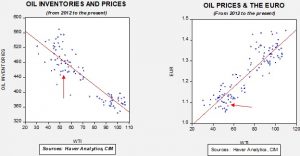 Based on our oil inventory/price model, fair value is $65.41; using the euro/price model, fair value is $46.93.  The combined model, a broader analysis of the oil price, generates a fair value of $52.79.   We are seeing a clear divergence between the impact of the dollar and oil inventories.  Given that we are into the maintenance season, we normally would expect inventories to continue to rise.  Prices will remain sensitive to Saudi output and tensions in the Middle East.