Our Comment today opens with an update on the Russia-Ukraine war, where Ukrainian forces continue to make surprising progress in the counteroffensives in northeastern and southern Ukraine.  We next review a wide range of other international and U.S. developments with the potential to affect the financial markets today, including a new controversy over energy policy in the European Union and a discussion of what has been driving the rebound in the U.S. stock market yesterday and today.

Russia-Ukraine:  The latest reporting indicates that Ukrainian forces continue to recapture significant amounts of territory not only in the northeastern Donbas region but also in the south around Kherson.  Notably, these gains have come at the expense of units that were considered to be among Russia’s finest before the war, which indicates that even Russia’s finest military units are now seriously degraded and have only limited combat forces available to them.

European Union:  The chief technical officer of German electricity grid operator Amprion warned yesterday that Germany may have to reduce or temporarily halt power exports to France and other countries this winter to prevent bottlenecks and shortages across its power grid.  The alert shows that the energy crisis touched off by Russia’s invasion of Ukraine has reached the point where it is more seriously threatening the bloc’s unity.

United Kingdom:  Just a day after being forced to back down on her plan to cut income taxes for the U.K.’s richest citizens, Prime Minister Truss is facing a new rebellion from her own Conservative Party over her plan to boost social benefits next year by less than consumer price inflation currently about 10%.  Instead, she wants to hike those benefits only in line with average wage growth, or about 5%, in order to reduce public spending.

Japan-North Korea:  Today, the North Korean military launched a ballistic missile directly over Japan for the first time since 2017.  The overflight forced Tokyo to issue a rare public alert for people to take cover and prompted condemnation from Japan and other countries.  North Korea’s recent missile launches are likely designed to draw the U.S. and its allies into new negotiations for security and economic concessions.  For investors, the provocations could raise risk premiums for Asian assets.

China-Taiwan-United States:  In an interview Sunday, U.S. Defense Secretary Austin said that the U.S. will help Taiwan “develop the capability to defend itself” against a Chinese invasion.  Austin stopped short of repeating President Biden’s recent vow to send U.S. troops to help Taiwan resist an invasion, but he still seemed to strike a more bellicose stance than officials have typically done under the U.S. “strategic ambiguity” policy.  That fits the pattern of an increasingly fractious U.S.-China relationship that threatens to catch investors in the crossfire.

United States-China:  A bipartisan group of 15 senators is planning to introduce legislation to create a “China Grand Strategy Commission,” which will be given two years to develop a whole-of-government approach guiding Washington’s relationship with Beijing.  The goal will be to formulate a U.S. “grand strategy” on China that could avoid conflict while allowing the U.S. to continue pursuing its interests.

U.S. Economy:  The Institute for Supply Management yesterday said its September ISM Manufacturing Index fell to a seasonally adjusted 50.9, compared with 52.8 in each of the previous two months.  The ISM indexes are designed so that a reading over 50 points to expanding activity, and therefore the report suggests that the U.S. factory sector is still growing, only slowly.  That is likely the kind of data the Federal Reserve policymakers want to see to be sure inflation pressures are coming down, even though New York FRB President Williams yesterday said price pressures are likely to remain sticky and will require a long period of high interest rates to combat them. 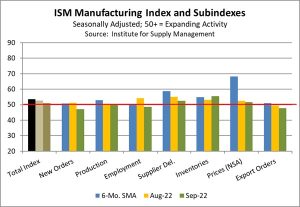 U.S. Supply Chains:  Apple (AAPL, $142.45) this week released data showing that 48 of its more than 180 suppliers had manufacturing sites in the U.S. as of September 2021, which is up from just 25 a year earlier.  The figures illustrate how U.S. firms are “re-shoring” or “near-shoring” production back to the U.S. to ensure stable supplies as the world fractures into relatively separate geopolitical and economic blocs.  As we’ve written many times before, such shortened supply chains will likely be costlier and less efficient than fully globalized supply chains, raising inflation and interest rates going forward.

U.S. Retail Real Estate:  Recent data suggests retail real estate is now performing strongly again for the first time in years, or even decades.  According to Cushman & Wakefield, U.S. retail vacancy fell to 6.1% in the second quarter, the lowest level in at least 15 years, while asking rents for U.S. shopping centers in the quarter were 16% higher than five years ago.  A separate analysis shows more stores opened than closed in the U.S. last year for the first time since 1995.  The improvements reflect a rebalancing of supply and demand after poor returns and high vacancies discouraged new building in recent years.