Our Comment today opens with an update on the Russia-Ukraine war, including the latest on Russia’s apparent withdrawal from the UN-brokered deal which allowed Ukraine to export grain from its southern ports.  We next review a wide range of other international and U.S. developments with the potential to affect the financial markets today, including news of an unexpectedly high rate of inflation in the Eurozone and a leftist win in Brazil’s presidential election.

Russia-Ukraine:  Ukrainian forces continue to recapture modest amounts of territory in the northeastern Donbas region, but Russian forces have apparently pushed them back in some areas as both sides jockey for position ahead of winter.  The Ukrainians also continue pressing their counteroffensive in the southern region around Kherson, although it appears that their gains there may have stalled.  In any case, the Russian military continues to strike back at Ukraine with air, missile, and kamikaze drone attacks on the country’s civilian energy infrastructure in an effort to break the Ukrainians’ will to fight.  Reports on whether Russia will try to defend Kherson rather than abandoning it have become contradictory. 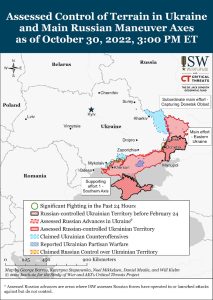 Eurozone:  As shown in the data tables below, the Eurozone’s October consumer price index was up 10.7% from the same month one year earlier, far worse than expected and much higher than the 10.0% increase in the year to September.  The inflation rate in October was a record for the Eurozone, but its data only goes back to the late 1990s.  Germany’s rate in October, at 11.6%, was its highest since 1951. 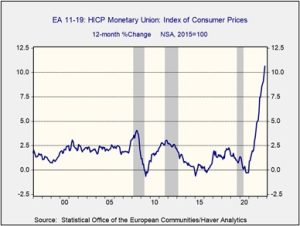 Indonesia:  Investment Minister Bahlil Lahadalia said Indonesia, the world’s largest nickel producer, is exploring the possibility of establishing a cartel for nickel and other key battery metals in order to control supply and boost prices, much like the Organization of the Petroleum Exporting Countries (OPEC). 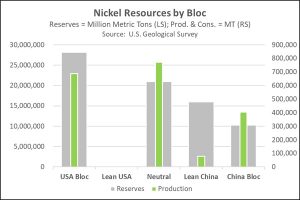 Brazil:  In a run-off election yesterday, leftist Former President Luiz Inácio Lula da Silva appeared to beat incumbent right-wing President Jair Bolsonaro by 50.9% to 49.1%.  In the runup to the election, Bolsonaro had pushed the argument that the country’s voting machines are subject to fraud, so there is probably still some chance that he will challenge the vote.

China:  The main iPhone assembler for Apple (AAPL, $155.74) said that it is shifting production away from its main Chinese plant in Zhengzhou after a botched COVID-19 lockdown in that city prompted masses of workers to flee.  The shutdown of the Zhengzhou plant will reportedly affect about 10% of the company’s iPhone output.  Both Apple and the assembler, Hon Hai Precision Industry (HNHPF, $6.40), are facing downward pressure on their stock prices thus far this morning.

United States-China:  Under Secretary of Commerce for Industry and Security Alan Alvarez stated in a speech last week that the administration’s broad new ban on selling U.S. computer chips, chipmaking technology, and related services to China will likely be followed by similar curbs on quantum computing, high-end biotechnology, and artificial intelligence software.  According to Alvarez, who transferred to the Commerce Department after a long career at the Defense Department, the U.S. restrictions are aimed solely at protecting U.S. national security.

U.S. Defense Strategy:  As required by law, last week the Biden administration released the unclassified version of its National Defense Strategy.  The document identifies China as the U.S.’s key “strategic competitor” and the military’s “pacing challenge,” while it recognizes Russia as merely an “acute threat.”  The overall strategy is based on “integrated deterrence,” or coordinating military, diplomatic, and economic levers from across the U.S. government to deter an adversary from taking an aggressive action. It also stresses “campaigning” to build up the capability of international coalitions and complicate adversaries’ actions.

U.S. Monetary Policy:  Officials at the Federal Reserve begin their latest policymaking meeting tomorrow, with their decision due out on Wednesday afternoon.  The officials are widely expected to hike their benchmark fed funds interest rate by another 75 basis points, but investors are also hoping that they will signal more moderate rate hikes going forward.

U.S. Bond Market:  When the Treasury Department issues its fourth-quarter funding plan in the coming days, investors will be looking for signs that it will start repurchasing older Treasury bonds in an effort to improve market liquidity.  Limited liquidity this year has produced volatile swings in Treasury prices and has made it much harder for investors to buy and sell government obligations.

U.S. Real Estate Investment Trusts:  Publicly-traded real estate investment trusts (REITs) have registered negative total returns of more than 25% so far this year, but non-traded REITs have produced positive total returns of as much as 10%.  The disparity is raising concerns that the non-traded funds are not properly marking down the value of their properties and are therefore over-valued.  If so, the non-traded REITs could be at risk of a sudden drop in value.