Our Comment today opens with an update on the Russia-Ukraine war, including news that Ukraine has retaken more land with its counteroffensives in the northeast and south of the country.  We next review a wide range of other international and U.S. developments with the potential to affect the financial markets today, including a dramatic U-turn in the U.K. government’s big tax-cutting proposal.

Russia-Ukraine:  Over the weekend, Ukrainian forces recaptured the important transportation hub of Lyman in Ukraine’s northeastern Donbas region, and the Russian military admitted it had withdrawn its troops to avoid their encirclement.  The loss touched off another round of angry recriminations by ultra-nationalist Russian bloggers and military commentators, who castigated Russia’s military leadership and demanded stronger performance from commanders on the ground.  Importantly, it appears that the Russian military failed to reinforce its position in and around Lyman, probably because President Putin has prioritized holding the southern region around Kherson and Zaporizhzhia against the Ukrainian counteroffensive there in order to preserve Russia’s land bridge to its illegally annexed region of Crimea. 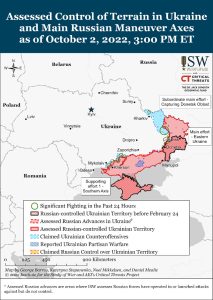 OPEC+ Oil Cartel:  Press reports indicate that the Organization of the Petroleum Exporting Countries (OPEC) and its Russia-led partners are planning to cut crude oil production by as much as 1 million barrels per day when they meet on Wednesday.  The reports also suggest that Saudi Arabia, the key country in the group, wants to lower output both to prop up prices and to keep some production capacity in reserve in case Western sanctions lead to a drop in Russian output later this year.  Russia, the other key producer in the group, also wants to prop up prices to help pay for its invasion of Ukraine.

United Kingdom:  After ten days of financial market turmoil touched off by her massive tax cut proposals, Prime Minister Truss has abandoned her plan to cut the top personal income tax rate from 45% to 40%.  The decision came as Truss faced a revolt by her own Conservative Party members of parliament, which raised the risk that the provision wouldn’t pass the legislature.

European Union:  The European Commission plans to propose a major reform of its “Growth and Stability” fiscal rules this month in order to give EU member countries more time to cut their debts and make space for public investment.  Under the proposal, the EU and national capitals would work out multiyear, country-specific plans for getting their debt burdens under control.  The plan aims to simplify the EU’s hugely complex fiscal rules while also tightening enforcement.

China – National Day Holiday:  Marking China’s National Day on Saturday, President Xi said in an article that the country “has never been closer” to achieving its great national rejuvenation, but that the last mile would be full of perils and challenges.  He urged Communist Party members to press on even as they face major challenges, risks, barriers, and contradictions in the coming years.

Turkey:  The September consumer price index was up 83.5% from the same month one year earlier, accelerating from the rise of 80.2% in the year to August and marking Turkey’s highest inflation rate since July 1998.  Despite the accelerating inflation, President Erdoğan continues to insist on further interest-rate cuts, pushing the value of the lira even lower.  Against the U.S. dollar, the currency is now down approximately 27% year-to-date. 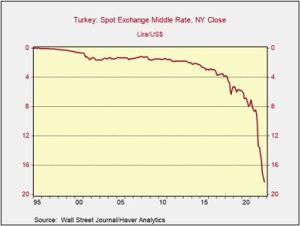 Brazil:  In the first round of Brazil’s presidential election yesterday, leftist Former President Luiz Inácio Lula da Silva led with 48.4% of the vote, beating incumbent President Bolsonaro with 43.2% of the vote.  However, Bolsonaro’s tally was significantly stronger than expected, setting up what could be a close vote in the run-off election on October 30.

China – Real Estate Market:  Ahead of the holiday on Friday, regulators announced a series of policy changes to support the contracting real estate development and housing industries.  The moves include special interest-rate cuts for first-time home buyers and a tax cut for a broader group of home buyers.  The moves prompted a jump in the Hong Kong-listed shares of major Chinese property developers today.

United States-China:  The top Republicans on the House Agriculture and Oversight committees asked the Government Accountability Office to conduct a study examining foreign countries’ acquisition of U.S. farmland and its impact on national security, food security, and trade.

U.S. Housing Market:  As rising interest rates push more families out of the market for new homes, builders are reportedly cold-calling investment buyers and offering them discounts of as much as 20% from the price they would charge to individual buyers.