Our Comment today opens with an update on the Russia-Ukraine war, where Russia appears to have ratcheted down its recent missile, air, and drone attacks as it runs low on its inventory of weapons.  We next review a wide range of other international and U.S. developments with the potential to affect the financial markets today, including further fallout from China’s recent Communist Party conference and the installation of a new prime minister in the U.K.

Russia-Ukraine:  As Ukrainian forces continue to slowly press the Russians back in the northeastern Donbas region and the southern Kherson region, Russian forces continue to attack Ukrainian civilian infrastructure targets with missile, air, and kamikaze drone attacks.  However, Ukrainian officials report that the scale of the Russian strikes on Monday was markedly smaller than in previous days, probably because the Russians have now depleted much of their stockpiles of missiles and drones and because the attacks have proven largely inconsequential.

EU Energy Crisis:  European natural gas prices have dropped below €100 per megawatt hour this week for the first time since Russia slashed supplies earlier this summer.  The drop reflects the unexpectedly warm weather and the fact that the EU’s gas storage facilities are now close to full, easing concerns about winter shortages.

China:  Chinese stocks stabilized today following foreign investors’ scrambling for the exits on Monday after President Xi’s election to a norm-breaking third term in office and his tightened political grip on the country.  However, the renminbi has lost another 0.6% against the greenback to trade at 7.3084 per dollar.  At that rate, the Chinese currency has now lost a whopping 12.8% year-to-date. 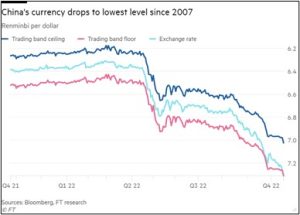 Turkey:  In recent years, in a move largely unnoticed by investors around the world, Turkey has become a key supplier of advanced military goods, particularly drones and other autonomous weapons.  In the latest development, a Turkish defense firm has been awarded government subsidies to produce one of the world’s first viable long-range, unmanned helicopters known as the Alpin.  Once the drone chopper is field tested and combat proven, the government plans to export the Alpin worldwide.

South Korea-North Korea:  South Korean President Yoon Suk-yeol warned that North Korea has now completed preparations for its seventh nuclear test.  If North Korea goes ahead with the test, it would be the first such provocation since 2017 and would likely touch off a new geopolitical crisis and further sanction efforts against Pyongyang.

United Kingdom:  Many British pension funds and the companies that manage their “liquidity driven investment” programs are reportedly amending their contracts to allow the funds to post liquid assets other than cash, such as government bonds, when they have to provide collateral to hedge their positions in the market.

U.S. Semiconductor Industry:  Pat Gelsinger, the CEO of Intel (INTC, $27.18), said at a conference that recently imposed U.S. restrictions on semiconductor-industry exports to China were a necessary shift in supply chains as the U.S. seeks to maintain technological leadership in its competition with China.

U.S. Fiscal Policy:  Data late last week showed that the federal budget deficit for the fiscal year ending September 30 came in at $1.375 trillion, down from the deficit of $2.772 trillion in the previous fiscal year.  The report showed that the improvement in the deficit mostly stemmed from a 21.0% surge in revenues as the recovering economy boosted tax receipts.  In contrast, federal outlays declined 8.0% as many pandemic relief programs got scaled back. 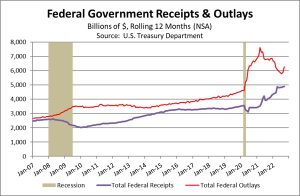