Our Comment today opens with an update on the Russia-Ukraine war, including a new Russian misinformation campaign alleging that the Ukrainians are preparing to detonate a radioactive bomb.  We next review a wide range of other international and U.S. developments with the potential to affect the financial markets today, with a particular focus on the Chinese Communist Party’s big national congress, which wrapped up over the weekend by electing Xi Jinping to a precedent-breaking third term in power.

Russia-Ukraine:  As Ukrainian forces slowly push the Russians back in the northeastern region of the Donbas and in the southern region around Kherson, Russian forces continue to stage missile, air, and kamikaze drone attacks against Ukraine’s civilian energy infrastructure.  Reports indicate that the Russians are also preparing to destroy a major dam on the Dnipro River upstream from Kherson to flood the region around the city and complicate Ukraine’s effort to recapture it.  Beyond that, the Russians are reportedly planning to retreat from Kherson in the coming days.  Separately, Russian Defense Minister Shoigu held telephone calls yesterday with his counterparts in the U.S., U.K., France, and Turkey to warn them that the Ukrainian military was preparing to detonate a “dirty bomb” (a conventional bomb laced with radioactive material) in order to accuse Russia of using weapons of mass destruction.  The calls were probably aimed at intimidating the U.S. and its NATO allies in order to undermine their support for Ukraine. 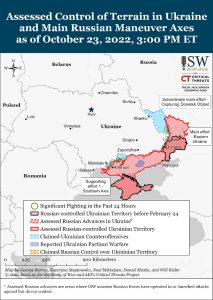 China:  As the Communist Party wrapped up its 20th National Congress over the weekend, Xi Jinping secured a norm-breaking third term as the party’s general secretary and replaced four of the seven members of the ruling politburo standing committee with his hand-picked allies.  Among those replaced was Premier Li Keqiang, a former rival of Xi’s.  It appears he is being replaced by Shanghai party boss Li Qiang, whose loyalty to Xi evidently was enough to offset his bungled COVID lockdown in Shanghai earlier this year.  It also appears that Xi orchestrated a brutal kneecapping of his predecessor, Hu Jintao, who was hustled off the leadership rostrum on Saturday, ostensibly for “health” reasons.  Separately, the delegates also approved a new party constitution that enshrined “opposing and containing Taiwan’s independence” as a key task.  The new constitution also beefed up the party’s commitment to “common prosperity” and using state-owned enterprises to drive the economy.

European Union-China:  As Xi was preparing to win a third term in power, EU leaders reportedly held a secret discussion on China at their summit last Friday. Reports indicate that the three-hour discussion resulted in a broad agreement that Europe has become too dependent on the powerful autocracy in manufacturing supply chains and raw materials.

France:  New regulatory filings indicate that many of France’s nuclear generating plants that were idled because of corroded piping are taking longer than expected to repair.  As a result, 26 of the 56 nuclear plants in France are now offline for maintenance or repairs.  In addition, strikes at 18 reactors owned by EDF SA (EDF.PA, €11.94), France’s state-controlled power giant, have delayed their restart by several weeks.  The outages threaten to make it even more difficult for Europe to make up for the energy supply disruptions caused by Russia’s invasion of Ukraine.

Italy:  Conservative Brothers of Italy Party leader Giorgia Meloni finished putting together her governing coalition and was sworn in as prime minister over the weekend.  While Meloni’s support for the U.S., NATO, and Ukraine is clear, all eyes will likely now be focused on how her government will work with the EU bureaucrats in Brussels.  A key challenge will be to balance Italy’s economic dependence on EU support with the Eurosceptic tendencies of Meloni’s right-wing coalition partners.

United Kingdom:  In the race to succeed Liz Truss as Conservative Party leader and prime minister, Former Chancellor Rishi Sunak has won a poll of support among the party’s members of parliament today after former Prime Minister Johnson pulled out of the race and challenger Penny Mordaunt struggled to win supporters.  That means Sunak will now become the U.K’s next prime minister.

U.S. Military:  In its annual report on U.S. military power, the conservative Heritage Foundation assessed that the U.S. has only a “weak” ability to fight and win in a hypothetical crisis involving two simultaneous major regional wars.  The report assesses that the Marine Corps has retained “strong” capabilities for such a scenario, but it scores the Army as “marginal,” the Navy as “weak,” and the Air Force as “very weak.”

U.S. Education System:  New data from the Education Department shows fourth- and eighth-grade students’ math scores dropped by the largest amount ever this year.  The data also showed a nationwide plunge in reading scores that wiped out three decades of gains.  The declines are ascribed largely to the lingering effects of the COVID-19 pandemic.