Good morning.  Risk markets are a bit weaker this morning but are mostly marking time after a strong week thus far.  Our coverage starts with the Beige Book and moves on to confirm that Q3 was a soft quarter.  Economics and policy come next with a focus on the budget process.  Bitcoin is making new highs.  We discuss that and other items in the crypto section.  China news follows; the heavy hand of government presses harder, and the real estate sector remains shaky.  We then look at international news as the EU meetings begin, and we close with a pandemic update.

On a lighter note:  Yesterday, there was a Bloomberg interview where a young child photobombed the video.  We have the link—check it out! It’s a hoot.

Beige Book:  Yesterday, the Fed released its Beige Book, a survey of the economy performed by the regional district banks.  The report offers information about the U.S. economy on a regional basis.  The report confirms what the next section is signaling—for a variety of reasons, the economy has slowed recently.  Supply problems are plaguing the economy, and until these kinks are resolved, the economy will continue to struggle.

Q3 is looking weak:  The Atlanta FRB’s GDPNow nowcasting model is projecting Q3 GDP growth of 0.5%.  Weak industrial production and soft housing starts were the latest data to lead to a lower forecast. 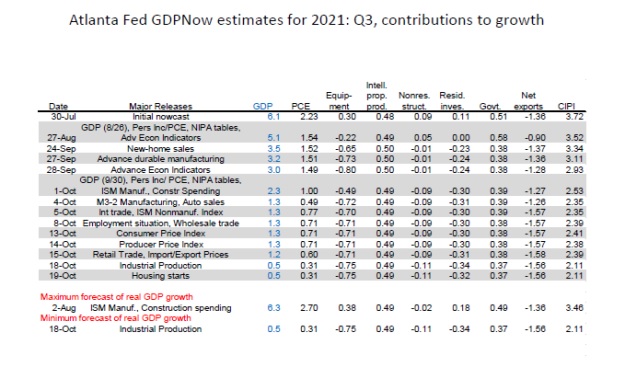 This summer, when the bank began forecasting for Q3, it was projecting 6.1% growth, with inventories adding 3.7% points and consumption 1.5%.  Consumption is now expected to add a small 31 bps to GDP.  What is surprising to us is that when consumption falls, net exports usually become a smaller drag on growth.  That isn’t the case in this model.  Inventories will have a smaller contribution as well.  Overall, the expectation is that Q3 will be an anomaly caused by supply chain problems.  That idea is likely correct, but nearly flat GDP in Q3 is disappointing; the worry is that supply chain issues won’t get resolved until well into next year.

COVID-19:  The number of reported cases is 242,163,439, with 4,924,605 fatalities.  In the U.S., there are 45,220,057 confirmed cases with 731,2712 deaths.  For illustration purposes, the FT has created an interactive chart that allows one to compare cases across nations using similar scaling metrics.  The FT has also issued an economic tracker that looks across countries with high-frequency data on various factors.  The CDC reports that 496,915,265 doses of the vaccine have been distributed with 410,189,737 doses injected.  The number receiving at least one dose is 219,381,466, while the number receiving second doses, which would grant the highest level of immunity, is 189,709,710.  For the population older than 18, 68.6% of the population has been vaccinated.  The FT has a page on global vaccine distribution.  The Axios weekly map shows cases rising as temperatures cool across the northern tier of states.  Meanwhile, the south is showing continued declines as cooler weather there allows outdoor gatherings.