Good morning! Today’s Comment begins with our explanation as to why unorthodox policies can lead to currency weakness. Next, we discuss how the possibility of a withdrawal of Western support could help end the war in Ukraine. We end the report with our thoughts on rising inflation’s impact on earnings and its implications for economic growth.

It’s the Economy: Japan and the U.K. are facing backlash as the countries’ unorthodox policies continue to stir controversy. 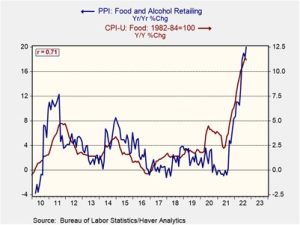 Under Pressure: Despite Ukraine’s recent successes on the battlefield, it is now facing political headwinds from the West.

In short, an indefinite war for Ukraine may be out of the question. If it wants to continue fighting, it needs to tighten its fiscal belt now because it cannot rely on the West’s support in the future, especially as these countries head toward recession. That said, there is a silver lining. Ukraine could be forced to the negotiating table next year, in which it may have to accept some territorial losses in order to maintain its sovereignty. If we are right, the situation could pave the way for Russian commodities to enter the market, thus providing much relief for struggling countries. At the same time, EU energy consumers can never look at Russian supplies the same way again. Even if Russian oil and gas returns to Europe, there will still be an incentive for redundant supply sources. It would not be inconceivable to see quotas on Russian oil and gas flows. Thus, even if the hostilities end, the reverberations will continue.