Our Comment today opens with an update on the Russia-Ukraine war, including details on the shooting of newly mobilized troops at a training camp in Russia and signs that Russian oligarch Yevgeny Prigozhin may be positioning himself to eventually push President Putin aside.  We next review a wide range of other international and U.S. developments with the potential to affect the financial markets today, including several items related to China and a discussion of the evolving energy crisis in Europe.

Russia-Ukraine:  Russian forces, which are now on the defensive in Ukraine’s northeastern Donbas region and in the southern region around Kherson, continue to launch missile, artillery and drone strikes on residential areas and critical infrastructure across Ukraine.  The strikes appear to have very little direct military value, as they are apparently geared more toward terrorizing the population and undermining Ukrainian morale.  As one example, the strikes have been focused heavily on destroying Ukrainian energy infrastructure ahead of winter.

Global Commodity Markets:  Anglo-Australian mining giant Rio Tinto (RIO, $55.18) warned that prices for iron ore and other key commodities are likely to keep falling in the near term as the U.S. and European economies fall into recession and Chinese housing construction continues to fall back.  We still think today’s geopolitical frictions will buoy commodity prices in the coming years, but the warning from Rio Tinto is a reminder that the asset class could still pull back sharply in recessionary periods.

European Energy Crisis:  German Chancellor Scholz said his government will now allow the country’s three remaining nuclear generating plants to keep producing electricity until mid-2023 to help get Germany through Europe’s winter energy crisis.  Longstanding plans had called for the plants to be shut down permanently at the end of 2022.  The decision essentially reflects a major backdown by the German Greens, one of the three parties in Scholz’s coalition.  The decision is also further evidence that nuclear energy is getting a second look now that many countries are facing energy shortages because of the war in Ukraine and other geopolitical frictions. 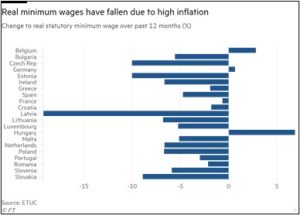 United Kingdom:  Although British financial markets have calmed considerably since Prime Minister Truss’s government backed away from its massive, debt-funded tax cuts, new reports suggest that the Bank of England will further delay its planned sale of billions of pounds of government debt beyond its current start date of October 31.  According to the reports, the central bank officials worry that the market for Gilts is still too unstable to launch the quantitative tightening program.

China-United Kingdom:  Yesterday, British Prime Minister Truss  expressed concern after a video emerged that appeared to show a Hong Kong activist being dragged inside the Chinese consulate in Manchester and beaten during a protest.  The aggressive behavior by the Chinese diplomats will likely further strain China-U.K. relations.

China:  As we receive more detail on the Communist Party’s 20th National Congress, one thing that strikes us is that President Xi in his opening speech Sunday called on the country’s military to develop faster so that it can win “regional wars.”  That marked a departure from recent years, when Xi typically called on the military to fight and win “wars,” with no reference to their scale.  Reverting to China’s customary emphasis on regional wars may simply aim to focus the military on the potential conflict around Taiwan, but it could also be a tacit admission that China cannot yet hope to vanquish the U.S. and its allies in a broader conflict.

United States-China:  Apple (AAPL, $142.41) has reportedly suspended plans to use memory chips made by China’s largest memory chip maker, Yangtze Memory Technologies Company, even though Yangtze had already completed the months-long verification process for Apple to use the chips in its newest iPhones.  The decision illustrates the impact of the new U.S restrictions on the involvement of U.S. persons in developing chip facilities in China, and on equipment and materials shipped to Chinese wafer fabricators that produce NAND flash-memory chips with 128 layers or more.

U.S. Hurricane Damage:  Reinsurer Swiss Re (SSREY, $18.35) said it expects approximately $1.3 billion in claims from Hurricane Ian after it struck Florida last month.  The company also estimated that the storm caused total insured losses of between $50 billion and $65 billion, making it the second-most expensive storm in U.S. history after Hurricane Katrina in 2005.