Good morning! U.S. equity futures are pointing higher this morning. Today’s report begins with our thoughts on EU and U.K. trade relations. Afterward, we review international news followed by U.S. economics and policy coverage. China news is next, and we end the report with our pandemic coverage.

Since coming to terms over the Northern Ireland issue, the two sides have struggled to make the deal work. Rivaling factions within Northern Ireland have made the protocol less tenable as Unionist and Loyalists, who consider themselves British, resented the restrictions placed on U.K. goods. In an attempt to appease critics of the protocol, Prime Minister Boris Johnson has openly pushed to revisit the agreement but Brussels has expressed little appetite for doing so. The unwillingness of Brussels to discuss the matter further has likely put the two sides on a collision course as calls for its removal have become louder.

The rise in tensions between the two sides indicates a growing trend that could lead to a potential hard break between the EU and the U.K. Although we suspect that neither side wants to scrap the Brexit agreement, political constraints may make it difficult for the two sides to coexist. PM Johnson’s credibility and legacy are dependent on not only navigating the U.K. away from the European Union but also selling the public that it was the best decision for the country. Additionally, leaders of countries within the European Union need to convince their constituents that leaving the bloc is a bad idea. As a result, the path of de-escalation is becoming increasingly difficult. Recent polls suggesting the British people have soured on Brexit likely add to PM Johnson’s woes. The fall in sentiment is partially related to the increase in food and energy shortages. 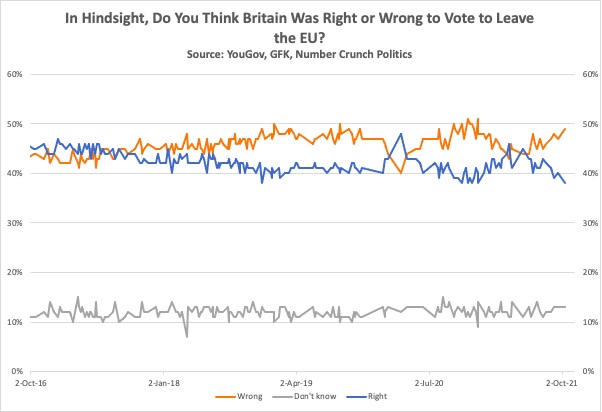 COVID-19: The number of reported cases is 239,642,888 with 4,882,474 fatalities.  In the U.S., there are 44,768,043 confirmed cases with 721,567 deaths.  For illustration purposes, the FT has created an interactive chart that allows one to compare cases across nations using similar scaling metrics.  The FT has also issued an economic tracker that looks across countries with high-frequency data on various factors.  The CDC reports that 490,951,045 doses of the vaccine have been distributed with 405,444,558 doses injected.  The number receiving at least one dose is 217,953,275, while the number receiving second doses, which would grant the highest level of immunity, is 188,281,747.  The FT has a page on global vaccine distribution.