Today’s Comment begins with several developments related to major global issues, including the current state of economic growth, supply chains, and energy supplies.  We then review various international and U.S. news items, including the Social Security Administration’s latest cost-of-living adjustments to retirement benefits.  We conclude with the latest on the coronavirus pandemic.

Global Economic Growth:  The IMF, in its latest World Economic Outlook, said supply-chain disruptions and health issues would weigh on gross domestic product enough to hold global economic growth to just 5.9% in 2021, versus a forecast of 6.0% in July.  The downward revision to the forecast stemmed entirely from weaker prospects for the developed countries; the organization slightly increased its forecast for growth in the emerging markets.  The group also raised its global inflation outlook and warned of the risks of higher prices.

Global Supply Chains:  The Biden administration has reportedly secured promises from Walmart (WMT, $139.38), UPS (UPS, $181.99), and FedEx (FDX, $221.32) to extend their working hours in a bid to ease supply chain bottlenecks that are weighing down the U.S. and global economic recoveries.  Later today, the firms will announce a move towards a 24/7 work schedule as part of a broader effort to help clear the mismatches between booming demand and lagging supply.  The Port of Los Angeles will launch a similar 24/7 work schedule.

Global Energy Crisis:  In an interview with the Financial Times, International Energy Agency chief Fatih Birol warned that global energy markets would remain volatile unless investment in clean power can be tripled in the next decade.  According to Birol, projected investment in oil and gas is now aligned with the changes needed to reach net-zero emissions of greenhouse gases by 2050.  However, public spending on renewable power is only at a third of the future levels required.

European Union-United Kingdom:  The EU today will unveil a package of measures intended to reduce the bureaucracy associated with the controversial post-Brexit trading arrangements for Northern Ireland.  The proposals, which come in response to U.K. demands for a radical rewriting of the so-called Northern Ireland protocol, could reduce the number of customs and regulatory checks on the new Irish Sea border by up to half.  The U.K. is taking a hard line on the issue, and the measures to be offered today are unlikely to end the current EU-U.K. tensions.

France:  Six months ahead of the country’s next presidential elections, President Macron proposed a five-year, €30 billion investment plan to boost the country’s high-tech industries and reduce dependence on imported raw materials and electronic components such as microchips.  The “France 2030” plan would direct government money to ten targets, including the development of small “modular” nuclear reactors, green hydrogen production, and the financing of start-ups.

U.S. Debt Limit:  The House of Representatives yesterday approved Senate-passed legislation raising the federal government’s borrowing limit into December, temporarily staving off default while lawmakers battle over setting a new ceiling for U.S. debt.  The bill will increase the debt ceiling by $480 billion, an amount the Treasury Department has said would allow the U.S. to pay its bills at least through December 3.  President Biden is expected to sign the legislation in the coming days.

U.S. Social Security:  The Social Security Administration today will release its cost-of-living adjustments for retirement and disability payments in 2022.  The adjustments are expected to provide a roughly 6% boost, equal to a nearly $93 increase in today’s average retirement benefit of $1,543 per month.

U.S. Monetary Policy:  Atlanta FRB President Bostic said in an interview that last month’s sharp slowdown in U.S. payroll growth should not stop the Fed from beginning to taper its pandemic-era asset purchases in November.  According to Bostic, “I’d be comfortable starting in November . . . I think that the progress has been made, and the sooner we get moving on that the better.” 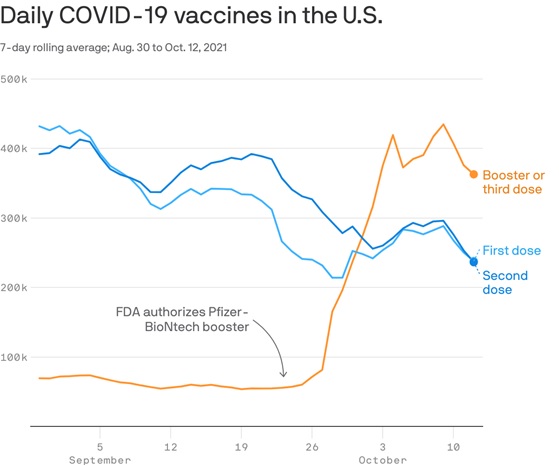